Time doesn’t seem to be an issue at all for this German guitar virtuoso, as he keeps on rockin’ the nation with another round of his first-class fusion of Heavy Metal and Hard Rock. 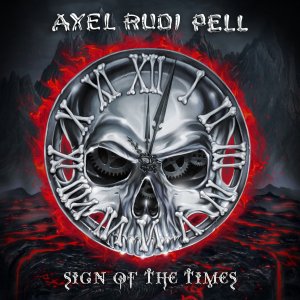 It looks like the one and only guitar virtuoso Axel Rudi Pell and his henchmen Johnny Gioeli on vocals, Volker Krawczak on bass, Ferdy Doernberg on keyboards and Bobby Rondinelli on drums will keep on rockin’ the nation for many decades to come based on the electrifying fusion of Heavy Metal and Hard Rock found in Sign of the Times, the 19th studio album in the band’s impressive career, keeping up with their own stream of one studio album every two years and always delivering first-class music like what they did in 2018 with Knights Call, in 2016 with Game of Sins, in 2014 with Into the Storm, and so on. As a matter of fact, you’ll need to go back over 30 years to fully appreciate the entire work of such talented Bochum, Germany-based guitarist, not to mention the over 1.7 million albums sold worldwide as the perfect indicator of how awesome his music is. Hence, his consistency enjoys more and more respect and appreciation within the hard and heavy community as the years go by, with Sign of the Times proving once again why he has (deservedly) become a true legend among guitar players and all types of metalheads from all over the world, even without accepting such honorable title.

As soon as you hit play, get ready to have your senses invaded by The Black Serenade, a cinematic intro that’s always part of their albums, warming us up for the incendiary Gunfire, where Axel begins slashing his strings in great fashion as usual accompanied by Ferdy’s 70’s-inspired keys and the potent beats by Bobby. Needless to say, Johnny is absolutely superb on vocals, yet again showing us all that their best songs always burn such as “Burning Chains”, “Fire”, and now this amazing composition. Then we have Bad Reputation, a lesson in classic Hard Rock led by Axel’s trademark riffs and the always crisp vocals by Johnny, also bringing a very pleasant pace and vibe and a beyond catchy chorus, all spiced up by the sharp and precise guitar solos by Axel; followed by the title-track Sign Of The Times, where an atmospheric intro is gradually boosted by metallic riffs, classic drums and the rumbling bass by Volker. Put differently, simply relax and enjoy over seven minutes of top-of-the-line Hard Rock that’s at the same time slow, steady and always great to listen to. 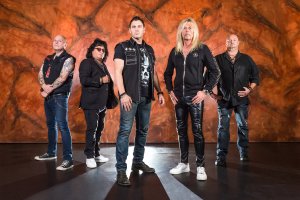 Speeding things up a bit the quintet fires the solid The End Of The Line, showcasing Bobby’s old school drumming while Axel and Johnny complement each other’s incendiary performances flawlessly, resulting in another amazing choice for their live concerts, whereas in As Blind As A Fool Can Be it’s time for one of their trademark, classy ballads, where we’re all invited to hold our loved ones tight and enjoy their smooth and gentle musicality while Johnny gives a lesson in passion and reach with his unique voice. And Ferdy takes the energy of his magical keys to a whole new level in Wings Of The Storm, a mid-tempo tune where Johnny tells a thrilling story through his soaring vocal lines while his bandmates generate a well-balanced and captivating ambience in the background, maintaining the album at an absurd level of quality, groove and feeling.

How about one more thrilling Rock N’ Roll ride with the boys? That’s what you’re going to get in Waiting For Your Call, utterly loyal to their own traditions and living up to the legacy of bands such as Bon Jovi, Heart and Journey, with Volker, Ferdy and Bobby being spot-on with their fiery instruments, providing Johnny all he needs to shine on vocals. Following such fun tune, a Reggae-inspired intro beautifully spearheaded by Johnny and Axel soon morphs into a 70’s Hard Rock and Heavy Metal extravaganza à la Rainbow titled Living In A Dream, bringing to our avid ears amazing performances by all band members, in special Ferdy with his whimsical keys, and showing a more alternative side of Axel while at the same time keeping his core essence intact. And last but not least, a fusion of epicness and dexterity concludes the album in Into The Fire, where Axel’s riffs sound insanely mesmerizing, therefore showcasing all his talent and skills as the fantastic guitarist that he is. Furthermore, this is such a gorgeous tune that I wish it was even longer and more atmospheric than its final shape and form just to provide us more time to enjoy Axel’s stunning music. 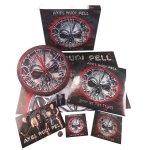 I don’t think I need to tell you that if you consider yourself a diehard fan of classic rock and metal, you definitely need to purchase Sign of the Times, right? And you can do so by clicking HERE and selecting your favorite version of the album, with the deluxe vinyl boxset (which comes with a wall clock, a digipak CD version of the album, a double-LP gatefold in different colours, a magnet, a button, an A1 double sided poster, an A5 photo card and a sticker, all strictly limited to 1000 copies) being undoubtedly your go-to version of it. Also, don’t forget to give Mr. Axel Rudi Pell a shout on Facebook showing your respect and admiration for the amazing music he always brings to us fans, with Sign of the Times keeping the flames of such unparalleled guitarist and his loyal bandmates burning bright for the next couple of years until we see more of his stylish metal music. And as you might have already noticed, saying he’ll stun us once again with his captivating creations is not just a simple desire or a dream, but the truth, the whole truth, and nothing but the truth.

Best moments of the album: Gunfire, Bad Reputation, The End Of The Line and Living In A Dream.