Touching themes like depression, psychosis and solitude, the debut album by this promising Italian project will take you on a one-way journey to the desolate lands of doom.

Formed in 2018 in Brescia, a city in the northern Italian region of Lombardy, Funeral Doom project Scent Of Darkness was born from the artistic expression of the band’s mastermind and guitarist Gianluca Moreo, known from his work with Vereor Nox, aiming at delivering lugubrious and unsettling doom tailored for fans of bands like Saturnus, Novembers Doom and Ahab. Now in 2020, after partnering with vocalist and multi-instrumentalist Lorenzo Telve (from Canticum Diaboli), Gianluca and his Scent Of Darkness are unleashing upon us the project’s debut EP entitled Insanitude, a concept album which speaks of psychological and social experiences lived in first person by Gianluca himself, touching themes like depression, psychosis, abandonment, mistrust, delirium, solitude and hope. And let me tell you that the final result, consisting of four Depressive Funeral Doom Metal songs with painful, desolated and sick traits, will certainly leave you completely disoriented after the album’s 30 macabre and sluggish minutes are over.

The somber acoustic guitars by Gianluca kick off the first track of the EP, the grim Reborn, being gradually accompanied by Lorenzo’s slow and steady beats and an enfolding atmosphere, with Lorenzo growling deeply and demonically and, consequently, resulting in a black mass of Funeral Doom for admirers of the genre. Then featuring lyrics by Alex Gothnesia and guest vocals by Gray Ravenmoon (Hateful Desolation), Trust Issues sounds even heavier and more caustic than the opening tune, with Gianluca and Lorenzo generating a menacing ambience with their Stygian riffs, bass jabs and drums, and with the raspy and hellish roars by Gray bringing an extra dosage of malignancy to their already visceral Doom Metal, followed by Crowded Solitude, another brutal, smashing Doom Metal extravaganza led by the funereal drums by Lorenzo while Gianluca keeps extracting sheer obscurity from his razor-edge riffs, sounding perfect for savoring each second in pitch black darkness. And last but not least, anguished spoken words will penetrate deep inside your psyche in the 10-minute aria entitled Whispers From Nowhere, where the band’s infernal duo continues to pave a sinister and dark path with their rumbling music, also presenting cryptic passages, eerie narrations, endless solitude and savage madness, all embraced by the gruesome gnarls by Lorenzo while the music flows like a dark river from hell until the song’s grandiose finale. 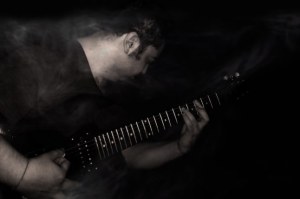 This 30-minute ode to all things doom can be better appreciated in full on YouTube, but of course I highly recommend you purchase a copy of the album from the Masked Dead Records’ BandCamp page or from Discogs to show your support to such up-and-coming Italian project, keeping the flames of doom burning in the depths of the underworld of heavy music. Also, you can get to know more about Scent Of Darkness by following the project on Facebook and by subscribing to its YouTube channel, darkening your heart and your thoughts even more as you join Gianluca in his one-way journey to hopelessness and desolation. If this high-end and very detailed EP is just the first release by Scent Of Darkness, I wonder where the project can go in the Doom Metal universe, leaving all fans of the slow, visceral and somber side of doom eager for more of his unrelenting creations in a not-so-distant future.

Best moments of the album: Trust Issues and Whispers From Nowhere.