Join those Teutonic thrashers in their quest for heavy music to the sound of their sophomore album, bringing to our ears a collection of rebellious anthems inspired by the glory of the 80’s and 90’s. 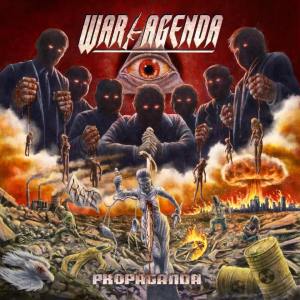 Ready to kill in the name of old school Bay Area Thrash, a Daisbach and Sinsheim, Germany-based horde formed in 2012 that goes by the straightforward name of War Agenda has just unleashed upon humanity their sophomore album, titled Propaganda, a rebellious ode to 80’s and 90’s thrash in the vein of Exodus, Slayer, Testament and Kreator, among others. Featuring an insurgent artwork by Mal Semmens Art, Propaganda has everything a diehard fan of classic Thrash Metal can ask for, from its austere lyrics to raspy vocals and smashing drums, showcasing all the talent of one of the band’s masterminds Ingo on the guitars together with his loyal henchman Hamdi on drums and newcomers Mostafa Troll on vocals, Raafat on the guitar and Marcel on bass. In other words, simply put on your best mask and join those Teutonic thrashers in their quest for heavy music, slamming into the pit and raising your horns to the sound of their visceral creations.

In the intro Sounds of Oppression we’re treated to serene and melancholic acoustic guitars, but of course darkly oppressive, exploding into the title-track Propaganda, where the metallic bass by Marcel will smash your head while Mostafa begins his Bobby Blitz-inspired vocal attack in an old school Bay Area Thrash extravaganza with the band’s own Teutonic twist, perfect for igniting the album’s endless circle pit vibe. Then blending the Speed Metal of Megadeth with the insanity of the early days of Exodus, Ingo and Raafat slash their stringed axes in great fashion firing ass-kicking riffs and solos nonstop in Plan B, a song that will inspire you to bang your head in the name of thrash, followed by Human Race, an acid “tribute” to our rotten society, with Hamdi pounding his drums accompanied by the strident riffage by the band’s guitar duo, spearheaded by Mostafa’s manic declamation of the song’s austere lyrics. And more of their no shenanigans Thrash Metal comes in the form of United in Hypocrisy, a headbanging tune showcasing crushing beats and strident riffs, recommended for slamming into the pit while enjoying a cold beer; whereas Marcel brings forward obscure bass lines in the bold Silence of Justice, before morphing into another feast of classic thrashing sounds the likes of Obituary, Nuclear Assault and Exodus, presenting Ingo and Raafat’s riffage in total sync with Mostafa’s raspy gnarls.

Heavy-as-hell and menacing from the very first second, the quintet brings forth the violent Apartheid, a lesson in 80’s Thrash Metal where Hamdi goes berserk with his wicked beats and fills from start to finish, and it’s time for total anarchy and chaos with the thunderous Chaos Invasion, blending their trademark Thrash Metal with modern-day Groove Metal thanks to the fulminating sounds blasted by Marcel and Hamdi with their unstoppable bass and drums. Then let’s head into the battlefield together with War Agenda in the frantic War of Nations, with Ingo and Raafat taking the lead with their razor-edged riffs while Mostafa vociferates and roars like a true thrashing beast in an awesome display of German Thrash Metal for fans of Kreator. In Killer Disease, despite its dark and venomous feel, the music is not as inspiring as its predecessors, sounding a bit generic I might say. Mostafa continues to bark rabidly while Hamdi smashes his drums with tons of precision, though, and closing such austere album we have Child of Dreams, showcasing a delicate intro before exploding into their classic thrashing sonority where Ingo and Raafat are on fire with their wicked solos, ending the album in a pensive and rebellious way . 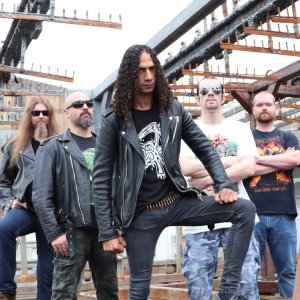 You can enjoy Propaganda in its entirety on YouTube and on Spotify, but of course in order to keep supporting underground Thrash Metal you should purchase the album from the band’s own BandCamp page, from the Great Dane Records’ BandCamp or webstore, from Season of Mist, from Amazon or from Discogs, keeping the band more than inspired to destroy everything that crosses their path with their thrashing music for many years to come. In addition, don’t forget to also follow War Agenda on Facebook, and whenever this never-ending, shitty pandemic is finally over, I’m sure you’ll be the first to know where you can slam into the pit like a true Thrash Metal lover to the music crafted by this talented and ruthless German squad, just the way we all like it in the most rebellious music style in Heavy Metal.

Best moments of the album: Propaganda, Human Race and War of Nations.