A lesson in savagery thematically centered around the many manifestations of carnal deviance by a blasphemous horde hailing from the Great White North.

Nearly eight years after the release of their sophomore album λόγος, Canadian Black/Death Metal horde Antediluvian returns with a new full-length opus entitled The Divine Punishment, a lesson in savagery thematically centered around the many manifestations of carnal deviance. Formed in 2006 in Guelph, Ontario, but currently located in Edmonton, Alberta, the band comprised of Haasiophis on vocals and guitars, Aedh Zugna on bass and Mars Sekhmet on drums offers in their newborn spawn a contorted rendering of the spirit, once pure, blemished and bespoiled through sexual blasphemy, turning the album into much more than a return to form for Antediluvian, but a reflection of the band’s evolution from their inception, extrapolated over the near-decade since their last album, to reveal a meticulously sculpted masterwork that continues to push boundaries just as the band has done for the last 15 years.

Eerie sounds ignite the almost 10 minutes of insanity in the opening track Obscene Pornography Manifests in the Divine Universal Consciousness, before morphing into a raw and absurdly grim Black Metal extravaganza where Haasiophis roars and gnarls like a demonic entity nonstop, accompanied by the sulfurous drums by Mars Sekhmet, and keeping the flames of the underworld burning bright this Stygian horde fires the excellent All Along the Sigils Deep, blending the furious Death Metal riffs by Haasiophis with the Black Metal atmosphere crafted by Aedh Zugna and Mars Sekhmet. How the Watchers Granted the Humans Sex Magick in the Primordial Aeon carries a darkly poetic title to a visceral and utterly primeval Black Metal aria by Antediluvian, once again presenting the infernal growling by Haasiophis amidst atmospheric, cryptic background elements; whereas Guardians of the Liminal is shorter than its predecessors but still fulminating to the core, also bringing some progressiveness and experimentations added to their Black Metal sonority and with Mars Sekhmet taking the lead with his rhythmic beats, followed by the no-shenanigans, brutal Tamasic Masturbation Ritual, a hybrid of the most putrid forms of Black and Death Metal where Haasiophis vociferates rabidly from start to finish.

Sadomaniacal Katabasis (Last Fuck of The Dying) brings to us fans one minute of pure, fuckin’ sonic devastation to crush our damned souls before the trio blasts our ears with Temple Prostitute, starting with a beyond disturbing intro and quickly exploding into a dissonant feast of deep guttural growls, frantic beats and obscure riffs and bass jabs, keeping the album at a gargantuan level of dementia. Then get ready for another bestial display of Black and Death Metal by Antediluvian in Circumcision Covenant, with Aedh Zugna hammering his bass supported by the intricate beats by Mars Sekhmet, whereas an ode to the number of the beast entitled White Throne goes on for way too long (if it was a little shorter it would have been a lot more effective, I might say). Fortunately, their second to last blast of demonic sounds, entitled The Liar’s Path, puts the band back on track, offering another crude, boisterous Black Metal exhibit with Haasiophis stealing the spotlight with both his inhumane gnarls and sick riffage. And lastly we have Winged Ascent unto the Twelve Runed Solar Anus, an insane way to conclude the album with its nine minutes of sheer obscurity and hatred in the form of metal music where Haasiophis and Aedh Zugna will pierce your ears with their stringed weapons, while Mars Sekhmet sounds like the apocalypse on drums, before all fades into the void in a truly climatic and sinister manner. 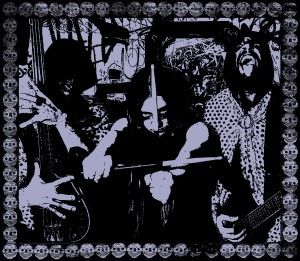 This Stygian horde hailing from the Great “Dark” North is waiting for you to join them in their quest for blasphemy and extreme music on Facebook and on Instagram, and don’t forget to also stream their vile creations on Spotify. The Divine Punishment, available for presale from the Nuclear War Now! Productions’ BandCamp page and soon from the Nuclear War Now! Productions’ webstore (as well as from Apple Music and Amazon), is indeed a fantastic display of everything Antediluvian stands for, providing fans of Black and Death Metal with the perfect soundtrack for 666 days of carnal deviance, profanity and punishment, exactly the way we like it when the music in question is so dark and evil.

Best moments of the album: All Along the Sigils Deep, How the Watchers Granted the Humans Sex Magick in the Primordial Aeon and Winged Ascent unto the Twelve Runed Solar Anus.