This unrelenting London, UK-based Death Metal entity will corrupt us all to the sound of their most intense, aggressive and challenging release to date. 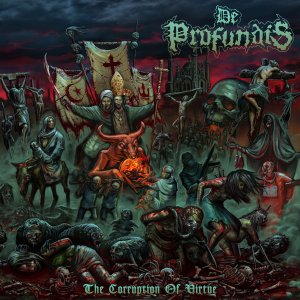 Most bands mellow with age, but that’s not the case with London, UK-based Death Metal entity De Profundis. Nearly two decades since their inception, the band currently comprised of Craig Land on vocals, Shoi Sen and Paul Nazarkardeh (both of Monument of Misanthropy) on the guitars, Steve Woodcock on bass and Tom Atherton on drums has only evolved to become more and more extreme with each album, their latest probably being their most intense, aggressive and challenging release to date, entitled The Corruption of Virtue, the follow-up to their 2018 critically acclaimed album The Blinding Light of Faith. Produced by Peter Dowsett and displaying a sick artwork by Alex Tartsus (Depravity, Sepulchral Curse), The Corruption of Virtue is an absolute treat for any fan of Death Metal who likes the music to be demanding, engrossing and well thought out, being therefore highly recommended for lovers of bands such as Death, At The Gates, Carcass and Martyr, among several others.

The quintet wastes no time and begin their Progressive Death Metal attack in Ritual Cannibalism, where Craig sounds awesomely gruesome on vocals supported by Shoi and Paul’s acid riffage, not to mention the demolishing beats by Tom; whereas Sectarian Warfare is even more devastating than the opening tune, with Shoi and Paul being simply flawless armed with their stringed axes while Steve and Tom make the earth tremble with their respective bass and drums in a lecture in Death Metal. Then the low-tuned, rumbling bass by Steve will crawl deep inside your mind in the venomous Relentless March, the perfect fusion of brutality and intricacy, with Craig sounding like a creature from the abyss; and it’s time to slam into the circle pit like a headbanging bastard to the sound of Weaponised Rape, where their progressive vein gets even stronger spearheaded by the unstoppable blast beats by Tom.

Sick guitar riffs and solos spiced up by endless violence and dementia are the main ingredients in the multi-layered Death Metal feast Embrace Dystopia, simply infernal from start to finish, and more of their undisputed Death Metal is offered to us all in Desecrating Innocence, with Craig vociferating rabidly in the name of evil, blasphemy and rage. In Religious Cancer we face three minutes of vicious, thunderous sounds blasted by De Profundis where the guitar solos by Shoi and Paul sound as sharp as a knife, always supported by the metallic bass by Steve. Following such demented tune, another round of their obscure but extremely melodic and technical music is offered to us all in Scapegoat, showcasing a great job done by the band’s guitar duo while Tom hammers his drums mercilessly. Lastly, we’re treated to another solid composition titled The Sword Verses, and albeit it lacks a little of the violence from the rest of the album we can still enjoy Craig barking in great fashion as usual. 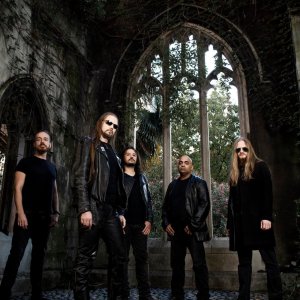 As already mentioned, De Profundis are far from slowing down or mellowing as the years go by; quite the contrary, in their vicious new opus The Corruption of Virtue they keep growing as a Death Metal beast, and if you want to show your total admiration and respect for those British death metallers you can start following them on Facebook and on Instagram, stream more of their infernal music on Spotify, and of course purchase a copy of the caustic The Corruption of Virtue from their own BandCamp page, as well as from the Transcending Obscurity Records webstore as a CD or as a gatefold LP with metallic effect and UV lamination by clicking HERE or HERE. It’s not easy at all to sound even more brutal than usual with each album released, but if the band in question is De Profundis let’s say that their new album proves that’s just another regular day in their undisputed career.

Worst moments of the album: The Sword Verses.