We shall praise the best Teutonic Thrash Metal institution of all time, as the gods of violence come alive. 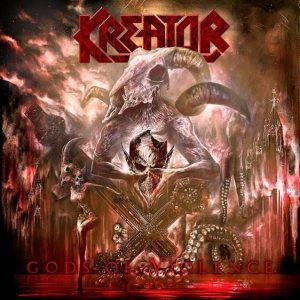 From the triumvirate of Teutonic Thrash Metal, comprised of Destruction, Kreator and Sodom, the band led by the iconic Miland “Mille” Petrozza has always been my favorite, delivering top-of-the-line, enraged and apocalyptic music since their inception in Essen, a city in North Rhine-Westphalia, Germany in 1982 when the band was still called Tormentor. And it might have taken almost five years for Mr. Mille Petrozza and his loyal bandmates to release new material since their 2012 opus Phantom Antichrist, marking the longest gap between two studio albums in their career, but after listening to the breathtaking Gods of Violence, their fourteenth studio album, you’ll see the wait for the greatest Thrash Metal band in the history of European metal was definitely worth it.

Featuring an ungodly artwork (both the worldwide and the American versions) by German graphic designer and illustrator Jan Meininghaus, who has already worked with bands like Bolt Thrower, Sacred Steel and U.D.O., as well as Kreator themselves in Phantom Antichrist and their 2013 live album Dying Alive, Gods of Violence is a brilliant lesson in Thrash Metal that, at least for the year of 2017, will change the world capital of the genre from the famous San Francisco Bay Area, in California, to the city of Essen. One might ask how Gods of Violence can be so fantastic if it’s not a revolution in music, as it brings the same old Kreator we’re all used to. Well, that’s the beauty of it, as Kreator didn’t try to be different than what they are in essence. Quite the contrary, they sound more old school than ever in the new album, always drinking from the endless fountain of evil named man, and the amount of passion, aggressiveness and energy they put into each and every song is all that’s needed for Gods of Violence to become a contemporary classic.

The epic marching intro Apocalypticon builds up the expectation of the listener for this Thrash Metal masterpiece, and that’s exactly what Kreator bring forth starting with the sensational, belligerent World War Now, a true high-octane thrashing work-of-art that will sound thunderous when played live, with Mille and Sami Yli-Sirniö blasting their infuriated riffs while Jürgen “Ventor” Reil shows how drums should be played in this type of music. Moreover, it also contains their trademark European melody that makes their music so captivating, which can also be seen in Satan Is Real, a headbanging hymn with all the elements that made the band what they are today. Not only that, Mille sounds menacing with his raspy vocals during the song’s devilish chorus, leading us all to believe that Satan is indeed real. 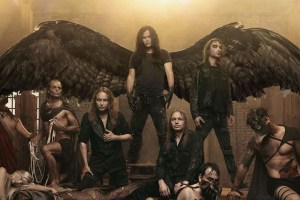 Totalitarian Terror, a song about the fight for freedom and the war against oppression (and the best song of the album in my humble opinion), is a thrilling, bestial composition where the guitars by Mille and Sami will pierce your mind beautifully. Furthermore, this Teutonic Thrash Metal anthem is filled with fiery solos, frantic beats and a powerful, insurgent chorus (“Totalitarian Terror / Welcome the strike / Wielder to strike / Totalitarian Terror / Feeding the oppressor / Resistance must rise when freedom has died”), or in other words, the perfect combination of elements to turn it into a classic. After a  serene acoustic intro, the title-track Gods of Violence brings forward more traditional Kreator, perfect for going absolutely mental during the band’s live concerts, with Ventor having an outstanding performance on drums while Christian “Speesy” Giesler brings thunder to the musicality with his metallic bass lines.

Get ready for a sonic tempest named Army of Storms, another excellent option for their live concerts presenting poetry in the form of Thrash Metal (“For tornados and hurricanes / Will not hold us back / Ultra void as the ultimate deception / Ride the winds broken free / Now revolt and you will see / Nations and empires reborn / Beyond the blood red horizons you’ll hear us”) and sounding very melodic thanks to the brilliant guitars by Mille and Sami; followed by the mid-tempo classy composition Hail to the Hordes, where Kreator pay a kick-ass homage to their loyal fans (“If night will fall black shadows / Are taking our sight / We carry each other through the darkest / Moments of life, stronger than hate / Stronger than fear, stronger than all / We are one / Hail to the hordes”). Simply break your neck to the pounding drums by Ventor, with the epic sound of guitars inspiring us all to raise our fists in the air to this mighty German thrashing horde.

Kreator’s shredding has always been superb, and the metal whirlwind Lion with Eagle Wings is no exception to that rule. Not only it has a sophisticated and potent name, but the band also sticks to their foundations with a pinch of modern metal music, with the result being obviously awesome; whereas Fallen Brother showcases one of the most touching metal videos (and songs) ever made, a tribute to all our deceased heroes including Lemmy, Dio, Jeff Hanneman, David Bowie, Prince, Chuck Schuldiner, Scott Columbus, Bon Scott, H. R. Giger, Leonard Cohen, among many others. In regards to the music itself, it’s beyond powerful, vibrant and cohesive, a lesson in heavy music by Kreator that will stick to your head forever. 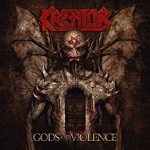 Then we have Side by Side, where violent riffs and supersonic drums build the perfect atmosphere for Mille to vociferate the song’s lyrics against all types of prejudice and how we should unite to eradicate that from our society (“As we crush homophobia / Side by side / And we’ll never let the shame / Turn our vision to ice / And I’ll remain by your side”). It amazes me how such brutal album can contain so many references to brotherhood, friendship and unity, proving how high-quality metal can make our lives better. Lastly, Death Becomes My Light might be a melancholic and introspective creation by Mille and his horde, but that doesn’t mean it’s not as heavy as hell presenting crushing riffs and drums, while Speesy keeps galloping his bass guitar. And when the song is over, you’ll just realize there’s not a single moment in Gods of Violence that’s below excellent, as simple as that.

You can get a lot of extra details about Gods of Violence, including tour dates and news, at the special microsite created for the album, and grab your desired version of it at the Nuclear Blast webstore, including the amazing special edition with the bonus Blu-ray/DVD “Live at Wacken 2014”. It’s already a great moment for heavy music in general whenever Kreator release new material, but when the album is as splendid as this, we know it’s our duty to listen to it nonstop and  praise the best Teutonic Thrash Metal institution of all time, as the gods of violence come alive.

Best moments of the album: World War Now, Totalitarian Terror, Gods of Violence, Hail to the Hordes and Fallen Brother.

Guest musician
Boris Peifer – bagpipes on “Hail to the Hordes”