The German pirates of Heavy and Power Metal are back with what’s unarguably their strongest album in over 20 years.

The German pirates of Heavy and Power Metal, collectively known as Running Wild, are finally back with an album that lives up to their own legacy, the excellent Blood on Blood. Produced, recorded and mixed by the band’s own mastermind, vocalist and guitarist, the one and only Rock N’ Rolf (aka Rolf Kasparek), and displaying an old school artwork by Jens Reinhold of Zenz-Art, the seventeenth studio album by one of the most important names of the German metal scene to emerge in the early to mid-80’s puts the band back on track after a few bland albums, offering us fans the power and the glory of fantastic albums such as Under Jolly Roger, Death or Glory, Black Hand Inn, Masquerade and The Rivalry. Put differently, if you’re into stories and tales of piracy, or into songs about riding your motorbike wildly and freely, then Rock N’ Rolf and his crew comprised of Peter Jordan on the guitars, Ole Hempelmann on bass and Michael Wolpers on drums have exactly what you’re craving in heavy music with their new opus.

Rolf and Peter begin their incendiary riff attack in the title-track Blood on Blood, an upbeat Heavy Metal tune will put you to headbang within 20 seconds without a shadow of a doubt, whereas Wings of Fire sounds even more traditional than the opening track, with Rolf being on fire with his trademark raspy vocals while Michael dictates the song’s pace, inviting us to hit the road to the sound of such rockin’ tune. Say Your Prayers is another thrilling mid-tempo song mixing old school Heavy Metal with badass Rock N’ Roll, with Rolf’s piercing voice being effectively supported by his bandmates’ backing vocals; followed by Diamonds & Pearls, where albeit their pirate-inspired lyrics might be too cheesy (“Setting all gear, no doubt and no fear / Trailblazers stories were told / Sliding the waves that cover the graves / Of seamen and ships in the cold”), they go along really well with their straightforward Heavy Metal instrumental parts. There’s no time to breathe as Rolf and his crew keep kicking ass in Wild & Free, another fast song about riding free in the name of rock and metal music, with Ole making the earth tremble with his sick bass, not to mention the slashing riffs and solos by Rolf and Peter. Then soulful guitars set the stage for the quartet to shine with their Pirate Metal in Crossing the Blades, showcasing an addictive chorus (“Crossing the blades / Flashing the steel / We will ride, and united we stand / Flashing the blades / Crossing the steel / One for all, and all for one, in the end”) amidst a prancing, beer-drinking, sword-fighting sonority.

I personally believe Running Wild shouldn’t try to do any ballads, and One Night, One Day is the ultimate proof that those do not match with their core essence, getting tiresome and bland after a short while, falling flat and sounding way too generic, especially if compared to the rest of the album. Fortunately they get back to a much more thrilling vibe in The Shellback, where Rolf leads his crew of buccaneers inspired by the band’s own early days, with Ole and Michael bringing the groove to the overall result. It’s then time for another rockin’ tune with a powerful vibe that will inspire you to hit the road with your metal brothers, entitled Wild, Wild Nights, where Rolf and Peter are precise as usual with their razor-edged riffs, before the band invites us to join them in an epic journey through The Iron Times (1618-1648), showcasing stunning passages, sharp riffs and solos and pounding beats, all spearheaded by Rolf’s dark, storytelling vocal lines, flowing like an arrow on fire in total darkness until its epic finale. In addition, if you go for the Japanese edition of Blood on Blood you’ll be treated to three very special bonus tracks, those being Stargazed, their cover version for KISS’ classic Strutter (which you can check the original one HERE), and my favorite one Ride on the Wild Side, all worth the investment in this unique version of the album.

As aforementioned, if you’re into Heavy and Power Metal with a strong pirate vein you’ll have a really good time listening to Blood on Blood, which is available for purchase from the Steamhammer Records webstore or as a very special deluxe box from the Napalm Records webstore, strictly limited to 666 units and including the digipak CD and tape versions of the album, a flag, a pendant, a patch, an autograph card and a chain, or simply click HERE for all locations where you can buy or stream the album. “We all know the difficulties the cultural sector was faced with during the lockdown. On the other hand, it also gave me and many other artists some extra time since most releases had to be postponed. I used that time to fine-tune every little detail of my new material. The result is an album that in my opinion is probably the best in Running Wild’s career to date. Every one of the ten songs sounds exactly as I had it in mind when I composed it. I’ve never been happier with a Running Wild record before,” said Rock N’ Rolf himself, and although he might be exaggerating when saying it’s the best Running Wild album ever we must agree it’s indeed a sharp, exciting and detailed piece of work by those German pirates, who are by the way waiting for you to join their crew on Facebook and on Instagram. As the title track says, “one for all and all for one, blood on blood, we stand as one!”

Worst moments of the album: One Night, One Day.

This “Rock N’ Roll version” of Madame Tussauds is an excellent option for all headbangers visiting the Canadian side of the falls. 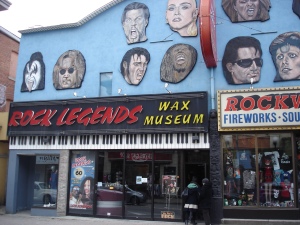 So you decided to visit Niagara Falls, either because you’re a tourist or to spend a weekend or a holiday there with your family. Not only that, you’re also a true metalhead. How about instead of the boring routine of seeing the falls/playing at the casino/eating at Boston Pizza/etc. you do something different and unique, something dedicated to your passion for Rock N’ Roll and Heavy Metal? If you like the idea, you’ll enjoy visiting the ROCK LEGENDS WAX MUSEUM at Niagara Falls, Ontario. Of course nothing there is going to be as perfect as the attractions you can see at the renowned Madame Tussauds,  but this is the only place where you can see Angus Young, Geddy Lee, Slipknot or Metallica, which are way better options than garbage such as the cast from Twilight or Katy Perry.

Located at the top of Clifton Hill and Victoria Ave, the access to the museum is extremely easy, and just by passing in front of it you can already see some of their attractions: when I was there they had one of the guys from Slipknot on display, as well as Gene Simmons, Slash and Ozzy right at the entrance. However, you can only take pictures of those if you actually buy a ticket to the museum. If you choose to visit the museum, you’ll be able to see not only some Heavy Metal icons (located at the entertaining Heavy Metal Chamber), but also many important musicians from the early days of Rock N’ Roll like Jerry Lee Lewis, Jimi Hendrix, James Brown and Freddie Mercury; more contemporary musicians like Kurt Cobain and Bono Vox; and even some Pop artists such as Madonna and Snoop Dogg (or however he’s called nowadays). All these attractions were sculpted by local Niagara Falls artist Pasquale Ramunno, who did a pretty good job in almost all cases in my opinion. One of my favorites, of course, is a giant Eddie based on the Killers album, but with some chains like the Eddie from the World Slavery Tour. 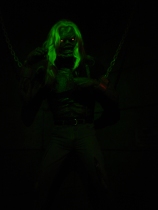 As soon as your tour through the museum is over, you’ll find yourself inside their store, called Rockworld. I was quite impressed with their huge selection of shirts, hats, belts, action figures and even some baby clothes for the future headbangers of Canada. The prices are not bad, and everything seemed to be made of good quality material. You can buy a new AC/DC or Pantera T-shirt to give you good luck for your time at the casino right after the visit to the museum, how about that? And as I’m talking about money now, don’t forget to print their online coupon to get a $1 discount per person for the museum admission. If you’re a group of 5 friends, for example, you’re saving the money of a beer.

There are some legends missing from the museum, of course: Ronnie James Dio and Rob Halford are two examples (at least as far as I know), but their current collection of over 60 figures is pretty decent and, as I mentioned before, totally different from any other wax museum in the world. I doubt you’ll find an Eddie in any of the Madame Tussauds unless of course it’s Eddie Murphy, but that’s not what we’re looking for, right?

Opening hours
Their website doesn’t say anything about the opening hours of the museum or the store, but I know it stays open until late on weekends and holidays, just as any other attraction in the city. You can give them a call anytime, just in case you’re planning to visit the museum.