Hailing from Poland, this Sludge Metal entity is ready to crush our senses with their new opus, delving into the story of breaking through the constructs of society and new opportunities. 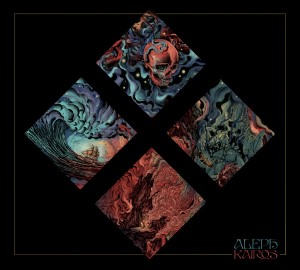 A gang of Pomeranian pirates established around 2014 in Sopot, a town on the Baltic Sea in northern Poland, Sludge Metal outfit Aleph א plays sludge-y and progressive music making use of rhythmic experimentations and a psychedelic feel, yet rooted in a grungy simplicity and an in-you-face quality, showcasing all the talent of vocalist and guitarist Jakób Ciszyn, guitarist Art Salsa, bassist Maciej Janus and drummer Kuba Grzywacz. Recorded in a barn by Rafał Serwatka and in Studio Ramtamtam by Michał Chełminacki, mixed by Michał Chełminacki, mastered by Piotr Łukaszewski at Custom 34 Studio, and displaying a cryptic artwork by Mara Nakama and Mirjam Hümmer, the brand new album by Aleph א, entitled Kairos, delves into the story of breaking through the constructs of society and new opportunities told on top of progressive-sludge riffs, a wide-range of grungy vocals and fast-paced atmosphere changes, positioning the band as one of the most interesting names of the Polish alternative scene.

The wicked, creepy album Intro sets the stage for those Polish metallers to kick some ass in Invert, where Jakób and Art begin slashing their stringed axes in great fashion, being gradually accompanied by their bandmates and, consequently, generating a massive, groovy wall of sounds that also presents some welcome elements from Post-Metal and Alternative Rock. After such visceral start it’s time for Doubt, a very experimental, obscure creation by the band with Kuba taking the lead with his minimalist, rhythmic beats, soothing our souls before we’re all treated to A Swarm of Dead Insects, a menacing feast of Stoner, Sludge and Post-Metal where Jakób roars in an anguished manner accompanied by the metallic, reverberating bass by Maciej, being absolutely perfect for banging our heads nonstop and succumb to the power of the riff.

It’s time for another jamming, experimental tune by the quartet titled Erode, showcasing a more delicate and introspective side of the band where Kuba is once again amazing behind his drums while Jakób nicely declaims the song’s cryptic words, morphing into the Stygian song Resistance, bringing to our ears soulful, electrifying guitar solos amidst the heavy kitchen brought forth by Maciej and Kuba, being highly inspired by rock music from the 70’s. And lastly, get ready for a 10-minute musical voyage that will penetrate deep inside your psyche in Whale, Pt. II, starting in a gentle way to the low-tuned bass by Maciej and feeling heavy, groovy, epic and thunderous from start to finish. Furthermore, their Jazz-infused insanity goes on and on until the song’s neck-breaking finale, spiced up by a stunning hint of the always beautiful sound of whales.

If modern-day Sludge Metal infused with Post-Metal nuances is your cup of tea (or if you have no idea of what that means but are curious to get to know more about it), you can find Kairos in its entirety on YouTube and on Spotify, but of course in order to show your support to those Polish rockers you should definitely purchase the album from the Galactic SmokeHouse’s Big Cartel (or click HERE for all locations where you can buy or stream the album). Also, don’t forget to give the guys from Aleph א a shout on Facebook and on Instagram, staying up to date with news, tour dates and other details about the band. Kairos is indeed a very experimental and progressive album that at the same time doesn’t forget the band’s metallic essence, pointing to a very interesting future ahead of them not only in their homeland, but anywhere else in the world where new metal music is appreciated.

Best moments of the album: A Swarm of Dead Insects and Whale, Pt. II.

Worst moments of the album: Doubt.