Behold the spine-chilling debut album by this one-man outfit from the UK, flawlessly combining his passion for 70’s and 80’s horror films with his love for 90’s Death Metal. 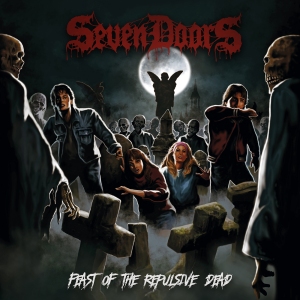 A one-man horror-themed Death Metal band formed in 2020 in Cornwall, located in the southwest of the UK, the unrelenting Seven Doors, whose name is inspired by the name of the hotel in Lucio Fulci’s 1981 film The Beyond, is ready to take everything to the next level of horror with the project’s debut full-length album Feast of the Repulsive Dead, the follow-up to its 2021 debut EP The Gates of Hell. Recorded by the project’s mastermind, vocalist and multi-instrumentalist Ryan Wills, mixed by Ben King at Cryptic Sound, mastered by JB Van Der Wal at Hewwetover Studio, and displaying an 80’s horror flick-themed cover art by Dedy Badic Art, Feast of the Repulsive Dead flawlessly combines Ryan’s passion for 70’s and 80’s horror films with his love for 90’s Death Metal, with his musical influences stemming from renowned acts like Death, Gorguts, Asphyx, Malevolent Creation and Cannibal Corpse, resulting in a banger of a record that will certainly grab the attention of Death Metal enthusiasts worldwide.

Fully created by Slasher Dave of Acid Witch, A Quiet Night in the Cemetery is a great intro absolutely inspired by all of those awesome slasher flicks form the 80’s, sending shivers down your spine before Ryan begins decimating his guitar in the title-track Feast of the Repulsive Dead, a lesson in brutality and gore where he roars and gnarls deeply like a creature taken from a horror movie. And Ryan keeps distilling his visceral, in-your-face Death Metal in the also demolishing Stalked, Strangled and Stabbed, displaying an amazing job done with his riffage and his vile but intricate beats; followed by The Morbid Mortician, with the guest solo by Paul Nazarkardeh of De Profundis bringing an extra touch of insanity to the music, therefore living up to the legacy of the genre, with the song’s infuriated riffage being a thing of beauty. Ryan’s fusion of Death Metal and horror continues to impress in Welcome Back to Life, offering more of his demonic growls amidst a neck-breaking sonic devastation, whereas inspired by giants the likes of Immolation, Cannibal Corpse and Morbid Angel, it’s time for a mid-tempo, heavy-as-hell tune titled I’ll Swallow Your Soul, with Ryan once again being on fire with all instruments.

It’s then time to slam into the circle pit to the sound of the Death Metal extravaganza titled The Hack Shack, showcasing a huge dosage of violence and gore spiced up by the hard work Ryan put into each second of the song, feeling very detailed, exciting and brutal, and there’s no time to breathe as Ryan continues to crush our damned souls in Isolated Existence, another Cannibal Corpse-inspired tune presenting hammering drums and demented riffs. After such demolishing tune, a serene intro explodes into sheer violence and hatred in The Graves of Matool. Needless to say, Ryan sounds infernal with both his guttural roars and unstoppable Death Metal riffs; and Ryan still has a lot of fuel to burn with Cannibalistic Humanoid Underground Dwellers, featuring the guest solos by Chris Monroy and Mike De La O of Skeletal Remains, another bestial composition where his bass and drums will hit you hard in the head. Lastly, we have his rendition of Malevolent Creation’s Eve of the Apocalypse (check the original one HERE from their 1992 album Retribution), and I must say what a beautiful tribute by Ryan and his Seven Doors, sounding as demented and obscure as the original version. 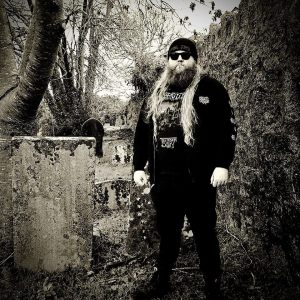 “The key theme here for me is density: protein-packed riffs rip along with satisfying retro thickness, sometimes shifting gears up into buzzing tremolo passages, and everything from the kick drum to the vocals just packs onto the satisfying impact. That’s not to say anything is overcrowded, but thin and lifeless death metal this is not. Classic staples of the genre, like larger-than-life solos floating on top of the mix and gnarly bass runs helping to kick off songs, keep Feast of the Repulsive Dead grounded and viciously enjoyable throughout. Whether or not you’re in the right climate to share my mindset, the end of the year – and this year specifically – tends to be rough for many reasons. Let Seven Doors drive away some of those worries through sheer force,” commented Ryan about his fantastic, must-listen new opus, and if you want to show him your support you can follow Seven Doors on Facebook and Instagram, stream his music on Spotify, and purchase a copy of Feast of the Repulsive Dead from his own BandCamp page, or from the Redefining Darkness Records’ webstore in the US (as a CD or an LP) and in Europe (also as a CD or as an LP) sooner than a dead body can resuscitate as a zombie.

Best moments of the album: Feast of the Repulsive Dead, The Morbid Mortician, The Hack Shack and Cannibalistic Humanoid Underground Dwellers.

Worst moments of the album: Absolutely none.