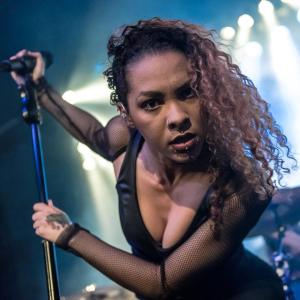 Things are about to get doomed, heavy and extremely sexy here at The Headbanging Moose with our metal chick of the month of May. Trained in classical, jazz and musical theatre vocals, as well as acting and dance, the talented and stunning Kayla Dixon, frontwoman for Doom Metal institution Witch Mountain and for Alternative Metal outfit Dress the Dead, is among us to prove once again that black girls do have a place in the world of heavy music, and she has been doing that in great fashion with her beyond powerful vocals since joining Witch Mountain in 2015. Hence, after listening to Kayla singing for the very first time you’ll get absolutely addicted to her voice and performance, no doubt about that, therefore going after everything she has already recorded in her career, it doesn’t matter if it’s metal or not.

Born on March 20, 1995 in Glendale, California and raised between Lancaster, Pennsylvania, California, and Maryland (as you can see, she moved a lot when she was a kid), Kayla has been singing since the age of five, joining a Jazz band at the age of 13, when she began to hone her vocal skills and discovered her passion for performing. Having studied ballet, modern and contemporary techniques at the American Dance Institute, the Dance Theatre of Harlem and the Maryland Youth Ballet, among others, not to mention she’s a trained actor of Stanislavski and Meisner techniques (which contributed to her deep understanding of the importance of storytelling on stage), Kayla has already participated in several projects in her career, such as productions at the Studio Theatre in Washington, D.C., the Levine Music, and the Interlochen Center for the Arts, also making an appearance in in the Sundance award winning movie I Don’t Feel At Home In This World Anymore, on Netflix, as well as in the TV series Portlandia, Grimm and Outlaw. In addition, she said in one of her interviews she doesn’t sit at a keyboard or think about intervals or scales, unless she’s writing harmonies. She usually writes the melody first, thinking about “what words match this melody and how can I put this melody into words?”

Kayla got her first contact with heavy music during her teens due to her sisters, who used to listen to bands like Marilyn Manson, Tool and Nine Inch Nails, and she fell in love for that type of music. After straying away from that for a while, she said it was when she was in the ninth grade that she rediscovered all those bands, later turning her attention to other heavier and more complex bands such as Meshuggah. She mentioned in one of her interviews that it was the intensity of metal music that really caught her attention at first, as she feels she can express all her emotions and feelings through metal. In addition, she also said that the energy coming from the audience while you’re on stage is also what makes heavy music so special for her.

Regarding her career with both Witch Mountain and Dress the Dead, everything started back in 2015 when Kayla, who had recently discovered the music by Witch Mountain, saw on their Facebook page they were auditioning for a new vocalist after the departure in 2014 of the amazing Uta Plotkin, prior to the release of the album Mobile of Angels. She then decided to take a shot at that by submitting a video audition, admitting she was a little nervous as she loved Uta’s lyrics and the vocal melodies, but fortunately for all of us fans of rock and metal Kayla became the band’s new frontwoman (and let’s not forget she was only 19 years old at the time). Four years later, this excellent Portland, Oregon-based band formed back in 1997 released their first full-length album with Kayla on vocals, self-titled Witch Mountain (which by the way she was responsible for all lyrics), not to mention their 2016 single Burn You Down, impressing not only the band’s diehard fans with her potent voice and her ability to easily switch between clean and harsh vocals,  but also her own band members. “When she laid down a scratch track in the studio and was going back and forth between the cleans and the dirties, our producer Billy and us were just sitting there laughing with joy,” recalls guitarist Rob Wrong. “For her that was just a scratch track, and we’re just like ‘most people in the world can’t do this.’ For Dixon, the possibility to cross styles and alternate between clean and screaming vocals is ‘a breath of fresh air.’”

Then in 2018, one year after parting ways with former The Haunted vocalist Peter Dolving, Dress the Dead announced a new lineup with our goddess Kayla on vocals in an unexpected move by many. “A mutual friend reached out to me about Dress the Dead.  One of my first thoughts was, ‘I don’t know if I’m ready or even at an appropriate talent level to be replacing someone like Peter Dolving for these guys.’  I’d battled with the idea in my head for several months before finally reaching out.  I had listened to and loved 1969, but what really hit me hard was when I heard the other songs that are still unreleased that they sent me.  I had no idea how musically diverse this band would turn out to be,” said Kayla about joining her second major band, but as what happened with Witch Mountain her vocals matched Dress the Dead’s music flawlessly, as you can enjoy in the excellent songs 1969, There Goes The Sun and Promises & Kisses. In addition to that, just to give you an idea of how healthy her relationship with her new bandmates is, take a look at this fun YouTube video titled “Dress The Dead – Crappy Comments”, where Kayla and the rest of the band read and discuss about the most ridiculous comments they received from fans via social media.

Our hardcore vegan (yes, she’s a vegan) had also been involved with several other bands and projects before joining Witch Mountain and Dress the Dead, each one offering Kayla a chance to showcase all her highly developed vocal skills. For instance, she was (apparently) the vocalist for a Cleveland, Ohio-based Groove/Death Metal band named Demons Within during an unknown period of time, and the lead singer for Sacramento, California-based Power Metal act Helion Prime from 2016 until 2017, with whom she recorded the sensational single Remnants of Stars, in 2017. Apart from that, she also started lending her unique voice now in 2019 to a British/Romanian Atmospheric Doom/Death Metal band named Clouds during some of their live performances, and she also appeared as a guest vocalist in the song Buried In Sand, from Clouds’ 2018 release Dor – Bonus Album;  in the electrifying title-track Terminal, from the 2017 album Terminal, by British Melodic Progressive Metal band Divinity Compromised; and more recently in Living Light, from the 2019 album Divided by Darkness, by Phoenix, Arizona-based Doom Metal act Spirit Adrift, to be released later this month.

Touring is always one of the most difficult and demanding tasks in the life of a musician, and as a talented vocalist that Kayla is she obviously warms up her voice (and mind) properly before going on stage, sometimes meditating for a few minutes to reach her desired state of mind prior to performing. As a matter of fact, Kayla mentioned that meditation was one of the main activities she discovered through the years to fight her childhood traumas, to work on her spirituality and to remain strong when facing any type of adversity. She also said that, to keep her body and mind healthy while touring with Witch Mountain, who by the way have a very aggressive touring agenda, she tries to eat well and work out whenever she can, avoiding things like partying and drinking. Even with all those precautions to stay in shape, Kayla said that due to her incendiary performances each show ends up being fairly exhausting for her but energizing at the same time, saying it’s another form of “meditation” for her. “Music is a way for me to express that negativity and get it out. There’s also a positivity about it. So, it’s very energizing. Music is what makes me happy and I believe it is my life’s purpose,” commented Kayla, and if you take into account the fact that when she’s not on tour she can be giving vocal lessons or acting (albeit she hasn’t being doing a lot of that lately due to her busy schedule), it’s the utmost proof she was born to be an artist.

As curious as this might sound, Kayla always mentions in her interviews that she considers herself an introvert, although she’s not actually afraid of talking to people. Despite having introverted tendencies, she confronts that inner fear by working really hard on it, saying that fear doesn’t have to be who she really is or her story. And even more curious than that, she mentioned that one thing she loves doing for relaxation and fun is watching horror movies, with her favorite one being the 1982 cult movie Poltergeist and also mentioning Suspiria as another movie she enjoyed a lot (I just don’t know if she’s talking about the 1977 original one or the 2018 version). She said Poltergeist really freaked her out, that it was extremely scary in her opinion, so how can this be a relaxing activity, right? Anyway, still talking about ghosts and paranormal activities, she said she had a few paranormal experiences in her life, as her mother was really into that kind of thing and would tell her about ghosts she saw. She mentioned that when she was seven years old she was sitting in the living room around Christmas time watching the classic TV special Rudolph the Red-Nosed Reindeer, and when she went to her room there was this white figure of an old man standing. In addition, her dad, who’s by the way a pastor, also claims he’s seen a ghost in his church, which used to be an old-fashioned one-room school house back in the 1900’s, describing the appearance of the ghost in great detail. If ghosts truly exist or not, no one knows for sure, but if Kayla channels those encounters and experiences into her music, and we all know the unknown has always been a magnificent inspiration for all genres and subgenres of heavy music, we can rest assured she’ll keep providing us first-class rock and metal for decades to come.

“When I get on stage, I lose control and there’s not much I can do about that.” – Kayla Dixon