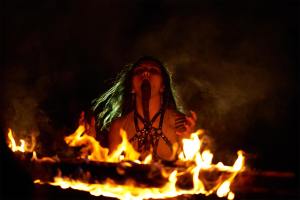 Beauty in desolation, or else…

Born and raised in the city of Brasília, inaugurated as Brazil’s capital in 1960, but currently residing in the charming city of Montreal, in the province of Quebec, in Canada, our metal lady of the month of April is here on The Headbanging Moose to embellish the airwaves with her distinguished music, bringing us the joy of the spring that has just started while still sounding as metal as she can be. If you’re a fan of progressiveness, groove and experimentations in Rock N’ Roll and Heavy Metal, get ready to be stunned by the multi-talented Bruna Wanderley, a songwriter, vocalist and cellist who’s taking the world of heavy music by storm with her brand new project, entitled Kapitur. You’ll certainly fall in love for the thunderous sound of her cello, placing her among the most interesting new names of the independent scene in Canada. Having said that, are you ready to rock together with Bruna and her incendiary cello?

Drawing from a young life in Brazil, living in an environment of violence, fear and contrasting beauty, artist and multi-instrumentalist Bruna Wanderley grew up in a conservative Evangelical milieu, which has led her to tease her family’s most beloved boundaries and, since her solo arrival to infamously libertine Montreal in 2015, she has actively performed and recorded as a cellist in a wide array of contexts. For instance, until the beginning of 2019 she was part of an Art Punk Rock band from Montreal named Spectroom, before the band called it quits in February that year. Bruna played cello with Spectroom together with vocalist and bassist Angelo Carocci, guitarists Branco De Souza and Raya Traboulsi, and drummers Matisse Chan and Emixam Maxime Gaboriault, having recorded with them the 2018 five-song EP Kissing Garbage, available for a full listen on Spotify. Although not being metal at all, the music by Spectroom can indeed provide you with very nice and relaxing moments while listening to it, and of course you can enjoy each note played by Bruna on her stylish cello.

Apart from her time with Spectroom, Bruna can be seen playing live with Canadian Death Metal band Infección as their bassist (not cellist) together with vocalist and guitarist Diego, drummer Andrés, and also guest guitarist Jean Bélanger, since 2021. She might not have recorded anything yet with the band, but if you want to have a taste of their fury and aggressiveness you can enjoy their debut demo on their BandCamp page. Furthermore, Bruna was also a guest vocalist for Canadian Progressive Death Metal band Messora on their 2019 album The Door, recording additional vocals for the songs The Veil and The Tide. And if you want to see Bruna Wanderley “multiplied” by four, you can enjoy Bruna’s cover video of Making a Murderer’s full theme by composer Gustavo Santaolalla, who’s largely known for his original score for The Last of Us, with all effects on the electric cello achieved with Line 6’s Helix LT.

Before we talk about Bruna’s brand new endeavor Kapitur, it’s important to mention that, besides her career in the Arts and Culture industry working mainly as a cello instructor and performer in Montreal, where she currently resides as already mentioned, she also studied Sociology and Anthropology at UnB – Universidade de Brasília in Brazil from 2010 to 2015, Music at Escola de Música de Brasília from 2007 to 2013, and Music at Vanier College in Canada from 2016 to 2018, and has not only obtained several certifications in web programming and development such as Programming in HTML5 with JavaScript and CSS3, Regex and jQuery, but she also has experience working to some companies in Montreal in that segment, as well as volunteering experience as a barista and also running art workshops for Coop Le Milieu, also in Montreal.

However, as this is an underground metal webzine let’s focus on what really matters, and that’s the fusion of extreme music with the whimsical, thunderous sound of her cello in her new project, entitled Kapitur, formed in 2020. Under the up-and-coming Montreal, Canada-based Kapitur she composes, sings, performs guttural vocals and plays the cello, while Sam Neumann’s unyielding drumming presents a strong contrast with the her unbound vocal and cello lines, also supported by guitarist Zach Dean and bassist Bruno Coe. The music is filled with soundscapes and hammering repetitions with bleak cacophony followed by heavenly melodies, being therefore highly recommended for fans of the music by Opeth, modern Swans, Godspeed You! Black Emperor, Saltland, and Tina Guo, among others. Bruna and her Kapitur will release an EP of original songs in the upcoming months, and while we wait for such distinguished experiment let’s stay in touch with the band on Facebook, on Instagram, on BandCamp, and on Spotify, where by the way you can find her first-ever releases, those being the demo song Decay, and the cover version for Sepultura’s all-time classic Roots Bloody Roots (or click HERE for all locations where you can buy or stream the song).

“Twenty-six years ago, Roots Bloody Roots pleaded for the preservation of Brazilian cultural diversity. Today, Kapitur’s distinctive revisit of the song revolves around the historical alienation of common people regarded as different, the Bloody Roots of us outsiders. It grips on the struggle of finding oneself estranged from one’s original and adoptive cultures, to the ongoing murder and colonization suffered by many people in a land that was theirs for centuries; from immigrant, racial, religious intolerance to the global, modern alien anxiety suffered by African descendants and their relationship to an inaccessible homeland. Roots Bloody Roots is about you, or someone you know and care for,” commented Bruna about her newborn beast. Recorded and mixed by Jonathan Lefrançois Leduc, Kapitur’s rendition for such undisputed metal classic will surely put a huge smile on the faces of Max and Igor Cavalera, Andreas Kisser and Paulo Jr., not just because of its rawness and aggressiveness, but also because Bruna is proudly carrying the flag of Brazilian metal to the four corners of the earth with her talent and hard work.

There are a few fun facts about Kapitur and the recording of Roots Bloody Roots that are definitely worth sharing with everyone reading this tribute to Bruna. First of all, when Kapitur’s music video for the song was still unpublished, someone Bruna knows sent a private link to it to Sepultura, and they loved it so much that Derrick Green himself contacted her to say it’s very creative, that it sounds incredible and that he looked forward to meeting her in person, which happened during their concert in Montreal on March 17 this year. In addition, Bruna mentioned that shooting the music video for the song was one of the most demanding and fun experiences the band has had so far. “It was a very cold Fall day, we set up a tent on the sandpits and unexpectedly spent 13 hours outdoors on the first day. As soon as we got there, one of the cars got stuck in the mud, and only after greatly shoving, did a guy on a tractor appear to tow the car in a few seconds. The photographer was buried naked in the sand at 5°C – he did say he liked it. For the entire time, I was cold from shooting in a thin dress and being barefoot on the sand. At night, we had to beware of the coyote sounds coming our way – it was so reassuring to have combustible material available, just in case. Finally, all the team left the site at 3 a.m., with our gear frosted by the dew and fake blood stains on our clothes and shoes. That whole night felt really special though. Will do it again next year, once we get rid of all the sand stuck in our stuff,” said our skillful cellist.

In summary, the multi-talented Bruna Wanderley can sing, play cello and bass, compose, write lyrics, act, and so on, which proves how focused and talented she is and, at the same time, showcases all her passion for music in general. I won’t be surprised if in a not-so-distant future we start seeing partnerships between Bruna and both underground and mainstream rock and metal bands, and I would love to see what she could do together with renowned bands the likes of Cradle of Filth, Triptykon and Tristania, adding her own touch of darkness, doom and heaviness to their already venomous music. Having said all that, let’s raise our horns to the “Cello Metal” blasted by Bruna Wanderley, resting assured she’ll always remain loyal to heavy music and to her roots, bloody roots.

“It’s uncommon to hear a classical instrument like the cello in heavy music that isn’t Melodic or Symphonic Metal. My intent is to explore creative ways of using my instrument in heavier contexts.” – Bruna Wanderley