Behold the debut full-length album by this rising metal duo, offering us all dual concepts of benevolence and malevolence, all against the backdrop of the history, mythology and land and seascapes of the Scottish islands. 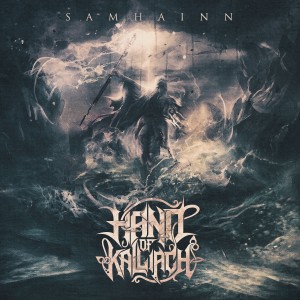 Melding a passion for metal music with traditional Scottish folk elements, Edinburgh, Scotland-based Atmospheric Celtic Metal duo Hand of Kalliach (a name that comes from the legend of the “Cailleach”, a Scottish witch god of winter) has just unleashed their globally awaited debut effort entitled Samhainn, focusing on dual concepts of benevolence and malevolence, all against the backdrop of the history, mythology and land and seascapes of the Scottish islands. Mixed and mastered by Wynter Prior at Sphynx Studios, and displaying a stylish artwork by Brazilian artist VHummel (aka Vinicius Hummel), the album is a lecture in Scottish metal by the couple formed of Sophie Fraser on vocals and bass, and John Fraser on vocals, guitars and drums, drawing  inspiration from the rhythms, time signatures and patterns used in folk music and adapting them for distorted guitars. “We’re both extremely excited to be releasing our debut full-length, Samhainn. Named after the ancient Celtic festival of winter (pronounced “Sah-win”), this album represents a huge gear change in our writing and production from our initial work, bringing a darker and more aggressive energy to our hybrid sound of Melodeath and Folk Metal,” commented John about the duo’s newborn spawn.

The opening tune Beneath Starlit Waters is atmospheric and enfolding form the very first second, with Sophie mesmerizing us all with her gentle vocals before John comes crushing with his deep roars and blast beats in a more epic version of Melodic Death Metal. Then in Solas Neònach we face sheer poetry flowing from the song’s lyrics (“Wake / From dreaming / The warmth departs these shores / From eightfold crones the chants are heard / The sand inverted once again”) while John slashes his stringed axe in great fashion, supported of course by Sophie’s ethereal vocalizations, followed by Each Uisge (roughly pronounced “eyach oosh-keh”), which translates to “water horse”, a demon from Scottish mythology that disguises itself as a horse before binding its flesh to a rider and galloping into the sea to drown and devour them. Musically speaking, it’s another stunning musical voyage showcasing a breathtaking vocal duet, a galloping bass and blast beats for our total delight. John continues to growl like a demonic entity in Roil, a lot more inclined to contemporary Melodic Death Metal, with Sophie embellishing the airwaves with her clean vocals; whereas adding elements from Viking Metal to their core essence it’s time for another epic onrush of sounds by the duo titled Cinders, where Sophie and John are thunderous with their respective bass and drums.

Arising from the depths of the underworld amidst a serene and melancholic ambience, The Lull Of Loch Uigeadail presents a more tribal side of the duo filling our ears with Celtic sounds and tones, bringing peace to our hearts before all hell breaks loose in Ascendant, leaning towards classic Melodic Death Metal while Sophie and John make the perfect metal couple throughout the entire song, resulting in a hybrid of pure rage and madness with smooth and hypnotizing sounds. Òran Na Tein’-éigin brings forward a stunning vocal attack by both Sophie and John, with its visceral drums creating a beautiful paradox with all background elements, and the duo keeps hammering our souls with their Atmospheric Celtic Metal in Trial Of The Beithir-Nimh, a solid, headbanging composition presenting metallic bass lines by Sophie intertwined with the flammable riffage by John. Finally,  get ready for one last round of poetic words (“Lost / On waves / Of an endless sea / Under starlit skies / It returns to me”) in Return to Stone while the music sounds a lot heavier and more doomed than all previous songs, feeling like the band’s farewell and, as a consequence, putting a pensive conclusion to the album. 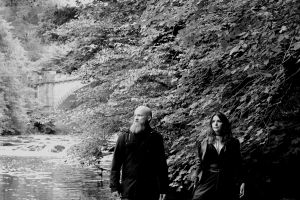 This beautiful and absolutely atmospheric album made in Scotland can be better appreciated in its entirety on YouTube and on Spotify, but of course if you want to show your utmost support and admiration for such talented duo you can purchase a copy of Samhainn from the band’s own BandCamp page (or simply click HERE for all locations where you can buy or stream the album), and don’t forget to follow Hand of Kalliach on Facebook and on Instagram to know more about this up-and-coming Scottish entity. As the festival of Samhainn marks the end of the harvest season and beginning of winter or “darker-half” of the year, there’s nothing better than listening to an album that perfectly depicts that change from light to darkness and all of its nuances, and we must thank Sophie and john for being able to generate that album with such high level of passion and musicianship.

Best moments of the album: Solas Neònach, Each Uisge and Ascendant.

Worst moments of the album: Cinders.