The ‘Witch returns with 31 minutes of pure destruction.

The first time I saw or listened to Skeletonwitch was back in 2011 when they were one of the opening acts for Arch Enemy here in Toronto (the other opening acts were DevilDriver and Chthonic, just so you can imagine how awesome that night was), and since then I’ve become really interested in their brutal music. Now this band from Ohio is back with another extremely heavy album, Serpents Unleashed, which is already being considered by many the best Thrash/Death Metal album of 2013 (you can listen to the entire album here) . And after listening to it, I kind of agree with that.

The opening track (and also the title-track) Serpents Unleashed is Hell on Earth! What a ferocious and intense massacre! Moreover, I like the fact they usually add many Black Metal elements to their music without sounding like a Black Metal band, which is already clear from the very beginning of the song. Beneath Dead Leaves keeps up with the devastation with its insane drums, pretty good riffs and crazy solos, while I Am of Death (Hell Has Arrived) is heavy, fast and has all the elements the fans of the band love in it. I saw the video for it a while ago and I have to say that it wouldn’t have been so great with a different song; it’s the best song of the album in my opinion.

The next tracks are From a Cloudless Sky, which has a nice intro and captivating riffs, and I can imagine how crazy the circle pits are going to be when it’s played live;  Burned from Bone, another fast tempo song with some more Black Metal elements (especially the riffs); and Unending, Everliving, a song that starts slowly if compared to the previous tracks, but then resumes the accelerated speed of the album. 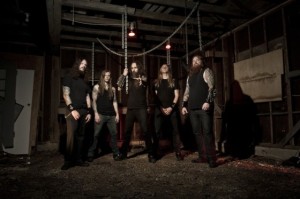 The second half of the album begins with Blade on the Flesh, Blood on My Hands, an intense song full of non-stop drums and riffs and a good chorus. It’s definitely another recommended track for some good mosh pits if played live. Then comes This Evil Embrace, which reminds me a little of some old Slayer songs, with a chorus that is pure Black Metal and the best guitar solo of the whole album. The worst song of Serpents Unleashed is Unwept: despite not actually being a bad song, it sounds too generic for me and lacks some creativity. The following track has the coolest name of all, Born of the Light That Does Not Shine, and delivers some more musical brutality for the delight of all Skeletonwitch fans. The album ends with its longest song More Cruel Than Weak (the only one with over 4 minutes), which provides us some high quality riffs and drums, and of course, a lot of violence.

The lyrics are gruesome as usual, but I guess you’re not expecting them to start singing about butterflies and unicorns, right? And finally, the album has an astonishing front cover: it looks like they hired a very talented Gothic artist from the 15th century to paint it! I love when the album art is not some generic computer-based image and adds a lot to the whole concept of the album, like what happens with Serpents Unleashed.

In summary, the ‘Witch proves again why they’re considered one of the best bands of the Thrash/Death Metal scene, with Chance Garnette doing an exceptional job with his unique guttural vocals. That guy sings like the most evil and hideous witch in the history of mankind, something that became a trademark in Skeletonwitch’s music. One might say the songs are too short, but remember that’s how Slayer has always released their albums, and all songs in Serpents Unleashed are as heavy as they can be. It’s just a matter of quality over quantity.

One final interesting fact about Serpents Unleash is that the band is even selling a pretty cool cassette tape version of it, just when we thought those types of media were long gone. Well, a lot of people thought heavy music was dead and gone years ago, but as you can see with bands like Skeletonwitch pulverizing everything, they were fuckin’ wrong.

Best moments of the album: Serpents Unleashed, I Am of Death (Hell Has Arrived) and This Evil Embrace.

Worst moments of the album: Unending, Everliving and Unwept.