These Italian guys bring you some awesome Doom and Stoner Metal with a unique goth vibe. They’re the Witches of Doom, yeah!

There were so many brilliant Heavy Metal and Rock N’ Roll bands from the 80’s and part of the 90’s with a strong goth vibe it’s hard to name just a few, like for example The Cult, Paradise Lost and Sisters of Mercy. However, very few bands playing that type of music were created (and survived) in the past decade or so, which unfortunately ended up dragging such a rich genre down to the underground of music. Let’s say that this little “problem” is almost over with the blessed birth of Italian Goth-Stoner-Doom Metal band Witches Of Doom and their outstanding debut album Obey, released a couple of months ago.

Although they’re not reinventing goth, doom or anything else, the way this Rome-based band blends all the elements from those music genres, also adding hints of 70’s Hard Rock and elements of more contemporary heavy music, is beyond amazing. In other words, you’ll be able to easily identify the influence of bands such as Moonspell and Depeche Mode in their music, but it’s far from being just a “cover” band. Witches Of Doom have their own musicality, a modern and personalized goth heavy rock that will please all fans of good occult music.

The Betrayal begins with a Breaking Bad-ish intro before turning into a thrilling mix of Doom Metal and Southern Rock, with highlights to the great vocal performance by Danilo “Groova” Piludu. The last part of the song sounds a lot like American Sludge Metal supergroup Down, especially its raw riffs and soulful solo. Following that excellent beginning, we have Witches of Doom, a much heavier version of that goth music from the 80’s played by Sisters of Mercy and an excellent “business card” from the band (“We are the Witches of Doom, yeah!”), and To the Bone, a song that could be played in any radio station in the world: it’s 100% catchy with a really cool atmosphere. Besides, it’s easy to see how much guitarist Federico “Fed” Venditti loves 80’s rock music based on his guitar lines.

The next track, Needless Needle, is another interesting song full of guitar effects the likes of Paradise Lost and a nice old-fashioned keyboard solo at the end, but its main strength is how the band supports the chorus with their instruments, making it exciting and unique; while the piano ballad Crown of Thorns focus on a more melancholic feeling, especially its lyrics, getting heavier halfway through it. 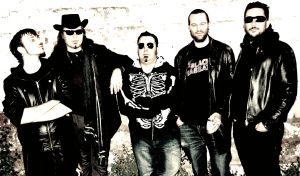 The second half of the album starts with the awesome distorted guitar and bass lines of Dance of the Dead Flies, which can be considered the first of the two songs that sound like a tribute to the one and only Type O Negative. It’s Doom and Stoner Metal to the maximum heaviness, with kudos to singer Groova for his badass performance on vocals one more time. The second and most Type O Negative-ish song of the album is entitled Rotten to the Core: this is one of those songs tailored to be played during a strip-tease at the most underground Rock N’ Roll strip club in the world, something like From Dusk Till Dawn (and I can even imagine Salma Hayek, or I should say Santanico Pandemonium, doing her sexy dance). In addition, once again the guitar solo enhances the overall energy of the song.

Last but not least, we have It’s My Heart (Where I Feel the Cold), a heavier and a lot better ballad than “Crown of Thorns” with nice piano notes by Graziano “Eric” Corrado and some really dark low riffs, giving it an intense goth vibe; and the title-track Obey, with its tribal intro, powerful keyboards, poetic lyrics (“I was waiting for you in the sky”), and a mesmerizing rhythm. It even has some interesting sitar notes to boost its delicious eerie atmosphere. And just for your information, this song doesn’t actually have 14 minutes: it ends at around minute 8 or 9, “returning” at minute 12 as some kind of “hidden track” that contains only some weird distorted noises.

In summary, Witches Of Doom’s Obey, available at their Big Cartel page, on iTunes and other different places, brings back to you directly from Italy that awesome 80’s goth sonority, offering you everything you loved so much in that era but without sounding obsolete at all. Quite the contrary, those guys are looking to the future of music, supported by their technique, their influences and, more important than that, a lot of feeling and passion for Rock N’ Roll.

Best moments of the album: The Betrayal, Dance of the Dead Flies and Rotten to the Core.

Worst moments of the album: Crown of Thorns.