Tarja’s fans never disappoint when she plays in Brazil and, this time, they said goodbye to the “Colours in the Road” tour in a night full of love, gratitude and amazing songs.

Saturday night, October 24, was an example on how multicultural a big city like São Paulo can be. That night, the city hosted several concerts, on small, medium and big venues, of small and big bands and there was no reason to one stay at home. One of the shows that night was of the Finnish singer Tarja Turunen, at Tom Brasil. She came back to the country a year after her last show here and, this time, with nothing less than seven dates in Brazil to end the Colours in the Road tour, that also had dates in Mexico and El Salvador and ends with concerts in Chile, Uruguay and Argentina in November.

The Brazilian band MAD OLD LADY were the opening act of the night. Formed by Eduardo Parras (vocals), Guga Bento (drums), Rafael Agostino (keyboards), Timo Kaarkoski and Tiago de Moura (guitars) and Fernando Giovanetti (bass), they were one of the bands that recently played at Motörhead’s MotörBoat (the only Brazilian act in this edition) and, back to Brazil, they were responsible for entertaining the audience that was waiting for the Finnish soprano. Mad Old Lady are a well-known band by Tarja’s fans for they also were the opening act of her previous concert in town, in 2014. The fans enjoyed an honest concert and saw on stage competent musicians playing songs of their album Power of the Warrior, and even a cover for Metallica’s Enter Sandman, sang by the bassist Fernando, the highlight of their show for many. 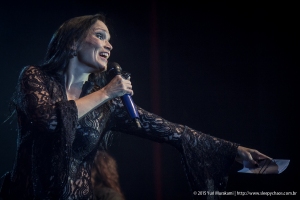 All the expectations of the night, of course, were kept for TARJA TURUNEN. October marked the tenth year since Tarja left Nightwish and the fans, always loving and supportive, were excited to see her once again on stage. The enthusiasm of the crowd was in high levels with the entrance of the musicians that form Tarja’s band in this tour: Guillermo De Medio (keyboards), Nicolas Polo (drums), Pit Barrett (bass), Alex Scholp and Julian Barrett (guitars). To the sound of the first tunes of The Phantom of the Opera, composed by Baron Lloyd-Webber, Tarja was the last one to come onstage and drove her fans to pure happiness while singing the famous song of the musical.

Smiling and talkative all the time, Tarja showed that she deserves the title of one of the greatest divas of heavy metal: between the songs, she always took a moment to thank the love and support of the fans, in English, Spanish and even in Portuguese, received many presents, like stuffed bears, dolls and love letters, and said that she considers Brazil as her fourth home. The setlist of the night was very generous and mixed songs from her three solo albums, some covers and even a new and yet unreleased song, No Bitter End, that Tarja said it will be in her upcoming album, to be released in 2016. The fans made a beautiful side show following the singer all the time clapping, screaming and singing along with her.

Among the covers, Tarja also revealed being an huge fan of James Bond’s movies and sang Goldfinger, theme song of the movie released in 1964. The Finnish diva also sang Slaying the Dreamer, a Nightwish song that she hasn’t sung since her departure of the band, and the night ended up with Gary Moore’s classic Over the Hills and Far Away, also famous as a cover released by her former band. There was still room in the night for a special birthday celebration to drummer Nicolas Polo, with everybody singing for him and Tarja bringing him a cake in shape of a snare drum. During this moment of the party, Tarja once again showed her gratitude to her loyal fans and said it was a pleasure and an honour to come to Brazil at the beginning and also at the end of this tour. When the show was almost over, during Until My Last Breath, one of the most known songs of her solo career, she came down the stage to salute all the fans that were on the front row.

Undoubtedly that was a memorable and very special night. Tarja is a talented singer like no other, she has a very strong presence and a charisma that few vocalists in heavy metal show in and out of the stage, as well as a legion of really dedicated and passionate fans. If it was an honour for her to play twice in Brazil with this tour, can you imagine how special it was to her fans? Certainly we all are already waiting for the return of this beautiful Finnish diva with the release of the new album, next year.