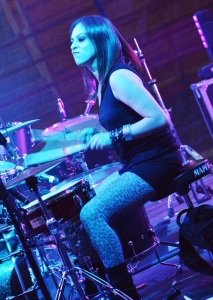 Fall in my spell, I’ll save you from your hell!

Mexican headbangers are famous worldwide for their deep and true passion for all things Hard Rock and Heavy Metal, being undeniably among the craziest and wildest ones when responding to their metal idols performing live in their beautiful country. So why not paying a tribute to those loyal metalheads from the land of the Aztecs and the Mayas with our Metal Chick of the Month? Obviously, the chosen one couldn’t be any random musician but a girl that truly knows how to make some good noise and intensify the beat of our hearts, the lovable Mexican drummer Yolanda Moreno Quintos, or as she prefers to be called in the world of heavy music, Yoli Moreno.

Hailing from Mexico City, or México, D.F. in her native language, the power behind the drums of Mexican all-female Heavy Metal band Mystica Girls is a woman of very few words who strongly believes in teamwork above all things. Not only that, we’re talking about another example of a metal musician who trespasses the boundaries of music, having a bachelor’s degree in Economy from ITAM – Instituto Tecnológico Autónomo de México, and who is also passionate about Orthography and Ecology. In other words, if you’re into girls who are far more than just a beautiful face, who are the whole package, the charming Yoli might be exactly what you are looking for.

Before joining Mystica Girls, Yoli was the drummer for a Mexican Death/Thrash Metal band called Inharmonious, with whom she recorded a demo consisting of four tracks in 2007 entitled Echoes of Rage. You can check a rare footage of Yoli with Inharmonious playing one of their demo tracks, Your Death, at the old school venue La Bodega del Metal, in Mexico City, as well as a pretty interesting cover for Sepultura’s all-time classic Refuse/Resist during the Festival Cultural Zacatecas in 2009. The quality of the videos is not perfect, but it’s enough to show you how Yoli and the other girls in the band can kick some serious ass together.

It was only in February 2012 when Yoli joined Mystica Girls, together with Chilean vocalist Mon Laferte, recording right after that in April 2012 the single The Conquest, including a promotional video for it, generating more than 30,000 plays in just one month and therefore increasing the band’s popularity in Mexico and in other parts of the world. That ended up leading to the re-recording of their 2011 album entitled MetalRose, now featuring Mon Laferte on vocals, in July 2012, and the release of a brand new EP named The Conquest one year later.

Then, in the beginning of 2014, Mystica Girls released a brand new full-length album entitled Gates of Hell, their first original full-length album with Yoli on drums. Gates of Hell had a very good reception from fans and critics, opening up lots of opportunities for the band in terms of tours and new projects, with the special event called SINFÓNICO.METALLICA., where the girls shared the stage with the OFIA – Orquesta Filarmónica de las Artes on June 6, 2015, being one of the highlights of their already reputable career. Check this nice video of Mystica Girls and the orchestra playing the classic Fuel on that night, paying attention to the performance by our beloved drummer, and you’ll see how good she is when holding her drumsticks.

Getting back to when Yoli joined Mystica Girls, she mentioned during one of her interviews she was very nervous the day of her audition, even having already shared the stage with them during her years with Inharmonious in the underground scene. However, all that nervousness was not sufficient to outshine her skills, as a week after the audition she received a notification that she became then part of the group. In addition to that, although the music styles were considerably different between the two bands, with Mystica Girls playing a more straightforward Hard Rock/Heavy Metal while Inharmonious was a fast and furious Thrash/Death Metal band, she got truly happy and excited with this new challenge in her life as a musician. If you want to see Yoli live in action with Mystica Girls, my suggestions are some YouTube videos from a series called “Resistencia Modulada presenta”, especially the ones for the songs No More! and Tiny Blue Dot, and of course you can always check their official YouTube channel and their ReverbNation page, or Cinthya BlackCat’s YouTube channel.

Furthermore, despite being “una mujer de pocas palabras”, there’s a short but newsworthy interview with Yoli on YouTube done by Mexican news channel Siete24, where among other things she talks about Mystica Girls’ participation in the 2014 edition of the famous Mexican festival Hell & Heaven. The entire interview is in Spanish, as you can see, and if you do not understand it really well I can help you by summarizing the most relevant issues discussed. In regards to the festival, Yoli talks about the band’s excitement for playing in front of so many people, sharing the True Metal stage with renowned bands such as one of her favorite groups, American Death Metal icons Obituary, before linking that topic with the release at that time of their new album Gates of Hell, explaining that although it is not a concept album, there’s a special theme in it related to self-awareness and how you face your fears in life. And finally, she talks about her experience with Mystica Girls since joining the band in 2012, including the aforementioned immediate recording of the single The Conquest, how working with the band inspired her to grow musically speaking, and the recent boom of Mexican metal groups, many motivated by the music by Mystica Girls.

She might not be as skilled on drums as Quico from the brilliant TV show “El Chavo Del Ocho” (just kidding, of course), but in case you just fell in love for our talented Mexican drummer Yoli and want to take her home, let me tell you that’s something perfectly possible even if you do not believe so. All you have to do is visit the band’s official webstore, purchase their peculiar keychain Yoli Moreno model for 50 Mexican Pesos (around 4 Canadian Dollars) and voilà! There you have Yoli Moreno and her drums with you day and night 24/7 forever, isn’t that great?