Not even a bitterly cold and snowy night in Toronto could stop Iron Maiden from writing another beautiful and epic chapter in The Book Of Souls.

Here we go again, another blistering cold night in Toronto when it was supposed to be already warming up, with around 15cm of snow out of nowhere just to make the beginning of this spring even weirder than the warmest winter in history. However, when you have the best Heavy Metal band in the entire world playing live in the city, who truly cares about some harmless snowflakes? My only concern was if we were going to have the same sound issues from the concert Friday night in Montreal also here in Toronto, but fortunately the sound quality at the Air Canada Centre was a billion times better than at the Bell Centre, making the whole night even more memorable.

After facing over 30 minutes out in the cold in a never-ending line where there was even an Elvis with an Eddie mask from Powerslave (would that make him the “Presleyslave” or the “Elvis High”?), I got back to the place where I belong in concerts, the floor section (and not those uncomfortable seats from Bell Centre). I might be wrong, but the floor section was quite empty for a sold out concert, even during Iron Maiden. If that’s for safety reasons, no problem, but I think they could have added at least a thousand extra tickets for that area. Anyway, my comments about the opening act, British Melodic Metal THE RAVEN AGE, are exactly the same from Friday night, which means if you read my review for Montreal you can apply each and every word to Toronto as well.

While some bands look and sound the exact same every single night, there’s something about IRON MAIDEN that makes each of their live performances unique even if they do not change anything in their setlist during the entire tour, as it’s happening during the amazing The Book Of Souls World Tour 2016. We all know which songs they’re going to play, and some people even complain about the band’s predictability, but when the concert starts Bruce, Steve and Co. manage to be different, to sound different and to always offer something new to their fans. Maybe that’s the main reason why they’re who they’re today, right?

Thanks to the almighty Eddie, there were no problems with the sound! Quite the contrary, each instrument was loud and clear, especially the pounding drums by the one and only Mr. Nicko McBrain and the rumbling bass guitar by the band’s mastermind Mr. Steve Harris, who made the epic tune The Book of Souls sound more powerful than ever. By the way, what an amazing reaction the fans had to all new songs from The Book Of Souls, especially the opening song If Eternity Should Fail and what was once again the highlight of the show for me, The Red and the Back. Of course fans went crazy when they played classics such as The Trooper, Powerslave (with Bruce wearing the same “luchador” mask from the past couple of shows due to Wrestlemania weekend), Hallowed Be Thy Name (with everyone at the ACC beautifully singing it together with the band), The Number of the Beast and Wasted Years, but it’s nice to see Iron Maiden are not trapped in the past and are still releasing awesome music for our total delight. 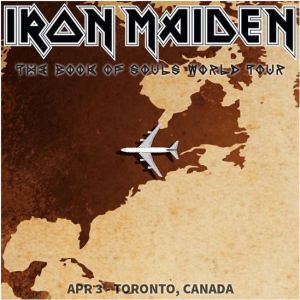 Now let’s talk about those special details that made last night unique, and I’m not talking about the cold and the snow. We all know how intelligent and skillful Mr. Bruce Dickinson is, and that was once again proved after the band performed the heavy and fast Death or Glory. Any other musician would have ignored the fact the song has a special importance to Toronto and to Canada, but Bruce made sure he spent the necessary time to explain the song is about Baron Manfred von Richthofen, better known as the “Red Baron”, who was shot down by Canadian air ace Captain Roy Brown in 1918, and that the seat of Red Baron’s triplane was donated by the dauntless Canadian pilot to a museum in Toronto. Bruce only forgot to mention the name of the museum, so if you’re interested in visiting it and seeing the airplane seat from the renowned Red Baron you need to go to the Royal Canadian Military Institute Museum (RCMI). As a side note, “Turns like a devil, climbs like a monkey!” (or something like that) were the Red Baron’s words about the Fokker Dr I, the most successful triplane in history. Guess where you can also find these words? And before I forget, poor Janick Gers, his guitar stopped working in the middle of the song and he had to spend about two minutes backstage trying to fix it. I’m not going to mention that most people didn’t even notice that “small” detail mainly because Dave Murray and Adrian Smith were on fire with their flawless riffs and solos, ans also because I like Janick’s performance (I think he IS important to what Iron Maiden are today), but if you also saw that you know what I’m talking about. 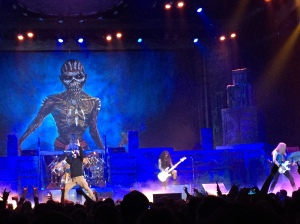 By the end of the show, while introducing the melodic Blood Brothers, Bruce spoke about the differences in terms of safety and quality of life found everywhere the band goes, comparing for example our always safe Canada to one of the most dangerous countries in the world, El Salvador, but also saying if there’s one thing that unites us all and helps us face any adversities in life is Heavy Metal, in special if you’re part of the MAIDEN FAMILY. On the train back to my small city, Oakville, an “old school” couple who also attended the concert sat in front of us and we instantly started chatting about Iron Maiden, Judas Priest, Anthrax, Slayer, Metallica (the guy even fist pumped me full of joy when I said Metallica is the most overrated band on earth), sports, and several other topics. They even gave us a customized pair of hockey blade tapes from The Book Of Souls without even knowing us! That moment I realized how big, fun and unified the Maiden Family mentioned by Bruce is. And I’m happy to be part of it, so happy I didn’t even care I had to wipe a ton of snow from my car at the train station, at midnight, and under a frigid temperature of around -6oC. Actually, I was very relaxed while doing that, humming the “Oh-oh Oh-oh-oh! Oh-oh Oh-oh-oh!” from The Red and the Black and already thinking about when I’ll be able to watch Iron Maiden kicking some serious ass once again.

Encore:
The Number of the Beast
Blood Brothers
Wasted Years
Always Look on the Bright Side of Life (Monty Python song)