The Italian coven of Doom and Gothic Metal returns in full force to put another electrifying Rock N’ Roll spell on you. 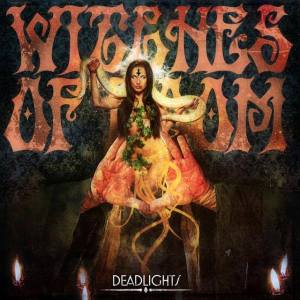 After releasing their debut album Obey back in 2014, I knew it was just a matter of time until Italian Goth-Stoner-Doom Metal act Witches Of Doom returned with more of their mesmerizing Rock N’ Roll extravaganza. Two years have gone by since that amazing album, and here we have the Rome-based warlocks Danilo “Groova” Piludu on vocals, Federico “Fed” Venditti on the guitar, Jacopo Cartelli on bass, Graziano “Eric” Corrado on keyboards and Andrea “Budi” Budicin on drums offering all fans of old school dark music the likes of Type O Negative, Moonspell and The Cult their brand new album whimsically entitled Deadlights which, just like its predecessor, will put you to dance, drink and make love like there’s no tomorrow.

Although I’m not a professional musician, producer or anything similar to that, I must say the upward growth in the overall quality of the album in terms of its production and sound is one of those things that not only helped Witches Of Doom explore new horizons and add new elements to their music, but it also shows how professional those Italian metallers are and how much they are focused on what they do. Thus, due to the enhanced quality of their music and to the brand new songs added to their portfolio, I think the band is more than ready to reach new heights and start spreading their exciting music throughout the world by touring in places like the United States, Canada and South America, either by themselves or as one of the attractions of some music festivals held in those regions.

Melancholy and sorrow flow from the beautiful Winter Coming, where Danilo once again provides an additional layer of emotion to the musicality with his vocal lines (not to mention the song’s sorrowful lyrics), followed by Homeless, another shot of wickedness provided by this talented band with the groovy bass lines by Jacopo and the progressive drumming by Andrea enhancing the song’s punch. In other words, this could become a radio hit anytime, anywhere. And get ready to be hypnotized by the Black Voodoo Girl, with its Gothic start getting heavier and darker until it becomes another one of the band’s “striptease” hymns. The keyboard passages by Graziano match perfectly with the heavy riffs by Fed and the somber vocals by Danilo, and you’ll surely have a good time singing its chorus along with the band.

In Mater Mortis, what begins as an epic chant quickly morphs into a futuristic tune, more specifically into an ode to the music from the 80’s with highlights to its awesome keyboards, and this instrumental voyage sets the tone for Gospel for War, a badass Gothic/Stoner Rock chant tailored for fans of Rock N’ Roll pub fights where Fed keeps blasting his excellent riffs while Andrea takes his drumming to a whole new and amazing level of intricacy. And last but not least, bringing elements from non-metal genres like Jazz and Blues to their sounding, the band offers us all the introspective and soulful I Don’t Want to Be a Star, showcasing smooth but fierce piano notes by Eric and strong performances by Danilo on vocals and by Fed with his fiery solos. If you love long and experimental songs with the energy and feeling of Rock N’ Roll, you might have found your new favorite song in rock music.

In summary, the music presented in Deadlights, which features a stunning artwork by Italian artist Carlo Muselli (who by the way is the big boss at Sliptrick Records) and is available on iTunes or on Amazon, has everything a true fan of heavy rock always looks for and more, and in order to know more about the Witches Of Doom, including their future plans and tour dates, don’t forget to go check their official Facebook page. This skilled coven of Doom and Gothic Metal is not among us to simply play some rock tunes, but in special to put an electrifying Rock N’ Roll spell on all of us, lovers of dark and rhythmic heavy music.