A Dark Metal album that beautifully represents all the diversity, radiance and finesse of the Greek culture, crafted by a power trio ready to conquer the world of heavy music.

In order to properly celebrate the 300th album review by The Headbanging Moose, let’s go back to a country that has always played a very important role in the history of immigration to Canada, especially during the early 20th century, building a healthy and flourishing relationship with “The Great White North”. Known for their incomparable history, rich cuisine and astonishing landscapes, Greece has always been a place where past, present and future meet, creating a distinct atmosphere not found anywhere else in the world, and the same can be said about their multilayered music as you’ll be able to see in Godbox Suicide, the debut full-length album by Gothic/Industrial Metal act Slitherum.

Amazing groups from the Hellenic Republic such as Diablery, Primeval Mass and Defision have already had their powerful music reviewed at The Headbanging Moose, not to mention the iconic Rotting Christ, all of them shaping their own style by blending elements from different genres and subgenres of rock and heavy music similarly to what Slitherum offer us in their new album. Formed in 2015 in the city of Athens, the power trio comprised of Nick Marinos on vocals, Giannis Kalamatas on guitars, bass and synths, and Antonis Kanaras on drums will take you on a journey through the realms of obscure and melodic music, showcasing all their skills and their passion for Dark Metal.

Godbox suicide starts with Λεχωνα (pronounced “Lechona”), which is Greek for a woman who has just given birth, an atmospheric intro that “gives birth” to the album and sets the tone for Feet, presenting a groovy sounding with the resonant bass lines by Giannis building the perfect ambience for the devilish growls by Nick. Not only it sounds like a hybrid of Moonspell and early In Flames, but it’s quite interesting how they add pure Hard Rock elements amidst the havoc generated by their Death and Black Metal vein, creating a fresh and solid sonority.

The title-track Godbox Suicide offers the listener slightly more melodic lines in a journey back to the 80’s, mainly due to the Type O Negative-inspired vocals by Nick. This is one of those top-notch Gothic Rock and Metal tunes tailored for lovers of the dark side who enjoy dancing facing the wall (if you know what I mean), with highlights to its powerful solos and extremely catchy chorus; whereas Vulnus, the Latin word for wound or injury, is another thrilling Gothic Metal composition with vocals leaning towards Black and Doom Metal, being melancholic, sorrowful and venomous. In addition, the spot-on Doom Metal beats by Antonis boost the song’s impact on the listener, making the whole experience of listening to Slitherum a lot more pleasant. 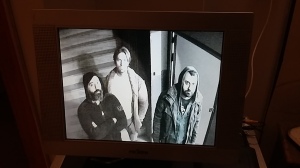 Keyboards bring forward an electronic vibe before Antonis smashes his drums in the awesome Industrial Metal chant Mother, with Nick going from the deepest low vocals to the harshest screeches while Giannis keeps kicking ass with his riffs and solos. After listening to this song, you’ll realize how much those Greek guys simply love all the alternative and obscure subgenres of heavy music and how elegantly and passionately they mix all their main influences into their musicality.

Before Godbox Suicide is over, Slitherum have another blast of their dark music entitled Child, a mesmerizing and atmospheric power ballad led by its strong bass lines and synths where Nick has a great performance declaiming the song’s cryptic lyrics, sometimes sounding like the weird creations by Faith No More (which just proves how versatile Slitherum are). And then the wicked composition Cure concludes the album in the darkest way possible, working almost as a regular outro but with extra layers added to it, including some eerie vocal lines in the background.

This up-and-coming Greek band can be found on Facebook and on YouTube, and Godbox Suicide can be purchased at Discogs as a CD or as a special vinyl version. Godbox Suicide is not only an album that beautifully represents all the diversity, radiance and finesse of the Greek culture, but also an album that will help this talented band go places and spread their peculiar metal music throughout the entire world.

Best moments of the album: Feet, Godbox Suicide and Mother.

Worst moments of the album: Cure.