A superb display of modern and melodic Power Metal by an emerging band from Greece who unite the past, present and future of heavy music in their compositions, always sounding fresh, vigorous and exciting.

Investing your energy and resources into making Power Metal in modern society “is a dangerous business, Frodo”. Apart from the mass hysteria caused by the swords and dragons from Game Of Thrones, just a very small niche of the world population still finds delight and excitement while listening to old school bands such as Manowar, Blind Guardian and many others who devoted their careers to singing about warriors and battles. Maybe it’s just a momentary trend and Power Metal will return to its glorious days soon, or maybe the advancements in technology and the modern-day life do not match with its thematic anymore. Luckily for all of us metalheads, there are still some newborn bands that not only know how to deliver high-end Power Metal, but they have also adapted their style to a more contemporary approach, sounding fresh and interesting even playing a subgenre of heavy music that’s becoming more and more relegated to the underground. Having said that, one of the best examples of how a band can be successful in this new world order are Greek Melodic Power Metal troopers The Silent Rage, who have just released their first (and superb) full-length album The Deadliest Scourge.

Formed by guitarist Nikos Siglidis in Athens, Greece in 2006, The Silent Rage have been on a roll since then, releasing their self-titled debut EP in 2009 (which got impressive feedback from global media) and another EP entitled Harvester Of Souls in 2011, thus sharing the stage with icons like Rage, Grave Digger, Stratovarius and Rotting Christ during their Greek tours. Displaying a somber artwork designed by Polish artist Michal Karcz of Parallel Worlds (who has already worked with Metal Church and VNV Nation), and featuring special guest musicians Apollo Papathanasio (Spiritual Beggars, Firewind), Yossi Sassi (Orphaned Land), Vladimir “Wolf” Reshetnikov (Arkona) and Theophilos Kritikos (Feel), The Deadliest Scourge unites the past, present and future of Power Metal in such a solid and compelling way those guys sound like veterans, but obviously always looking forward without being imprisoned in a past that unfortunately will never return.

Signal Of War, an atmospheric and somewhat tribal intro composed by guest musician Theophilos Kritikos, warms up the listener for the first song of the album named My Race Won’t Last, a modern Heavy Metal hurricane led by the unstoppable drummer Stamatis Katsafados, showcasing an amazing synchronicity between lead and backing vocals which end up strengthening the story told through the lyrics. Right after that excellent start, the title-track The Deadliest Scourge begins at full speed through the blazing riffs by Nikos and his bandmate Kostas Krikos, before Steve Venardo joins the music with his potent vocals in a solid display of contemporary Power Metal, reminding me of old school Iced Earth but with the band’s own touch and a high dosage of electricity. And pedal to the metal in what can be considered a tribute to traditional Heavy Metal by The Silent Rage entitled StormWarrior, a song that will inspire you to grab your sword and shield and head into the battlefield to the sound of its accelerated rhythm, its catchy chorus and a beyond powerful performance by Steve on vocals.

Those Greek metallers provide us another shot of pure Power Metal in Between Harmony & Sorrow, where both lead and rhythm guitars sound cutting and electrified, being beautifully complemented by the heavy and tuneful bass lines by Stavros Tsilivarakos and, consequently, keeping the level of stamina really high in the album. With guest musician Apollo Papathanasio on lead vocals, Sin Of A Pilgrim is a hybrid of traditional Heavy Metal and Hard Rock, presenting many elements found in the music by Iced Earth such as the fiery guitar solo delivered by Kostas amidst the precise beats by Stamatis. And when a song starts with an amusing guitar solo inspired by Heavy Metal from the 80’s like what we see in Leading The Legions, a powerful tune about courage and leadership, you know it’s going to be awesome. Furthermore, all band members put their hearts and souls into the making of this chant, which obviously enhances its impact and beauty. 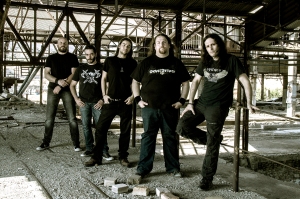 Proselytize The Masses can be described as “when progressive music meets pure Heavy Metal”, because this is exactly what you get in this great composition where lyrics are as traditional as possible (“You know that they’ve ruined your life / Led your behavior this way / Forming the limits and guiding your thoughts / Setting the borders, around and around as we’ll go / There’s no awakening from this oblivion / No escape or salvation, Gatekeepers leading you blind”). It’s quite impossible not to get thrilled by its lancinating riffs, with Kostas once again stealing the spotlight with his guitar solos. If you think there can’t be more awesomeness in The Deadliest Scorge, you’re completely mistaken, because even after so many epic songs they still have the necessary energy to craft more amazing metal such as in The Right To Dream, where Stamatis continues to smash his drums relentlessly while the guitar riffs by Nikos and Kostas keep piercing our ears.

The last “triumvirate” of this flammable album brings forward more high-end Heavy Metal, starting with the metallic Thoughts Collapse, a fast and heavy tune perfect for diehard fans of old school Power Metal, with highlights to the superb job done by the dynamic duo Nikos and Kostas on guitars and to the violent growling by Steve and Nikos. In A Piece Of Eden, the band offers the listener an uplifting chorus and another spot-on performance by Stamatis on drums, not to mention Kostas’ epic solo that leads to the song’s powerful conclusion, before Shadow Spirit, an awe-inspiring and medieval Folk Metal acoustic tune, puts an end to this brilliant opus. Guest musicians Yossi Sassi and Vladimir “Wolf” Reshetnikov add an extra dosage of epicness with their eccentric instruments, while the smooth ending of the song brings peace to our beaten and bruised metal hearts, sounding delightfully melancholic.

Available as a 500 hand-numbered digipack format (which includes a bonus track entitled Inner Scars), a regular jewel case format and digital download at the band’s BandCamp page or at the Alone Records’ webstore, The Deadliest Scourge is one of those albums that definitely put a smile on the faces of all admirers of good old Power Metal. You can find more about The Silent Rage and their incredible album at their Facebook page, YouTube channel, SoundCloud and ReverbNation, and witness how Power Metal is still relevant and puissant in the world of music. May the Gods of Metal always be by the side of The Silent Rage, helping them generate a lot more top-notch Heavy Metal for many years to come, never sounding cheesy or outdated and, therefore, continue taking virtuous and precise steps on the bright path ahead of them.

Best moments of the album: The Deadliest Scourge, StormWarrior, Proselytize The Masses and Shadow Spirit.