A top of the line Thrash Metal album by a passionate and all fired up quartet that wants to show the entire world Brazil has a lot more to offer than just samba and MPB. 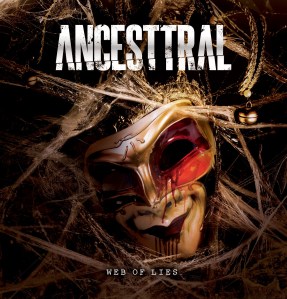 When my good friend Jorge Diaz, host of the awesome Brazilian radio show Timão Metal, asked me if I wanted to write a review for Web Of Lies, the brand new album by Brazilian Thrash/Heavy Metal band Ancesttral, I obviously accepted the task right away. First and foremost, it’s always a pleasure to show the world that “terra brasilis” has a lot more to offer than just samba and MPB in regards to music. Furthermore, Jorge brought to my attention that two members of Ancesttral are huge supporters of our favorite soccer team (and obviously the team that inspired the creation of Timão Metal), the almighty Sport Club Corinthians Paulista. And do you want to know how Web Of Lies sounds? Well, let me tell you it’s goddamn good, just like scoring a beautiful and pivotal goal against your worst archenemies in a decisive soccer match.

Formed in 2003 in the city of São Paulo, Brazil, Ancesttral have been on an exciting upward spiral of success since the band’s inception, having already released an EP named Helleluiah in 2005, their debut full-length album The Famous Unknown in 2007, and more recently another EP entitled Bloodshed and Violence in 2012. Now in Web Of Lies not only the band’s old school influences the likes of Metallica, Anthrax, Pantera, Slayer and Testament continue to shine in their music, but there’s also the addition of modern elements from artists such as Godsmack, Disturbed and Rob Zombie, contributing to a fresher sounding while remaining loyal to our good old Thrash Metal, their biggest passion in life (together with Corinthians, of course).

There’s a lot of electricity flowing from the very first second in the opening track, the fantastic What Will You Do?, which sounds like an awesome fusion of Fight, Metallica and Anthrax. Even before lead singer and guitarist Alexandre Grunheidt (who’s by the way absolutely nuts for Corinthians) joins the music with his blazing vocals, lead guitarist Leonardo Brito already fires a flammable mini-solo as the band’s welcome card, leading up to a difficult question: can it get any better than this? The solid and sharp headbanging composition Massacre, inspired by the Carandiru massacre, one of the most hideous slaughters in Brazil’s history, answers that question with its endless aggressiveness and dark lyrics (enhanced by an enfuriated Alexandre on vocal), sounding like a hybrid between some of the classics by Fight and the heaviest tunes by Disturbed; followed by Threat to Society, more modern than the two previous tracks due to the additional elements from bands such as Godsmack and System Of A Down. Furthermore, drummer Denis Grunheidt blasts groovier-than-usual beats, providing the perfect atmosphere for Alexandre and Leonardo to bring forth also more contemporary riffs and solos.

Megadeth-like riffs by Leonardo and more tuneful growls by Alexandre are the main ingredients in the well-crafted chant (and a good choice for their live performances) named You Should Be Dead, where its backing vocals are very effective in increasing the song’s impact on the listener, whereas in the excellent Fight a somber intro led by the obscure bass sounding by Renato Canonico suddenly becomes a merciless neck-breaking tune, presenting elements from old school Thrash Metal as well as from Alternative Metal. Not only that, albeit the vocal lines get more melodious (and consequently less violent), Ancesttral do not give up their usual brutality, being driven in this case by their heavier than hell riffs. And in Nice Day to Die, a Speed Metal composition with hints of Alternative and Nu Metal, the band definitely puts the pedal to the metal in terms of pugnacity, in special the demented vocals by Alexandre (and all backing vocals as well) and the frantic drumming by Denis.

After such amazing devastation, it’s time to slow things down in Pathetic Little Liars, focusing on a darker sounding, something that could have been recorded by Metallica in any of their albums after the 90’s (except of course for the horrendous St. Anger). The only minor issue with this song is that, in my opinion, nothing changes in its four minutes, being quite repetitive after a while. Also groovy and as heavy as hell, Subhuman is another high-quality composition with highlights to the burning riffs and solos by Leonardo, its nonstop beats and an awesome Rob Zombie-inspired performance by Alexandre, all translating into modernized metal music tailored for old school metallers. 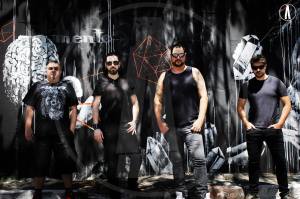 Then we have one of the most thrilling songs of the album, the title-track Web of Lies, another awesome tune where hints of the sonority by Disturbed become manifest one more time, showcasing how much Ancesttral looks into the future when composing their material, and despite being less thrashy than their customary sounding it’s still awesomely vibrant and resonant. Before the wondrous sonic extravaganza in Web Of Lies is over, Ancesttral show us what happens when Pantera meet Anthrax in the deranged Fire, where metallic riffs build the necessary ambience for Alexandre to spit fire through his incandescent vocals. In addition to that, I bet you’ll start screaming “FIRE!” together with the band while slamming into the pit to the sound of this belligerent tune, and that says it all when the music in question is Thrash Metal. As a bonus, What Will You Do? returns with the same punch as its original version, but this time with a special alternate solo by guest guitarist Rodrigo Flausino, concluding the album almost exactly like it started, which is evidently on a very high note.

The guys from Ancesttral are true workhorses, having invested a shitload of money, time and energy into the making of the album, and playing exhaustively everywhere in Brazil where first-class Heavy Metal is demanded. For instance, take a look at their outstanding performance at Manifesto Rock Bar, in São Paulo, on August 23, 2014 playing three of the new songs (“What Will You Do”, “Threat to Society” and “Web of Lies”) before they were even launched, and you’ll be able to notice how much they nurture a profound passion for all things metal. And in order to provide your honest support to this sensational Brazilian band, go check their Facebook, YouTube, ReverbNation and SoundCloud, and buy your copy of Web Of lies through their online store, the Shinigami Records’ webshop, CD Baby, iTunes, Amazon and many other locations. Just like Ancesttral do, simply respect your past, live the present, look into the future… E VAI CORINTHIANS!

Best moments of the album: What Will You Do?, Massacre, Fight and Web of Lies.

Guest musician
Rodrigo Flausino – guitar solo on “What Will You Do? (Alternate Solo Version)”