A fantastic album of old school “Motherfucking Thrash Metal” by an unstoppable quintet from Spain, annihilating everything and everyone that dares to cross their path.

What started in 2004 as an uncompromised Thrash Metal project by vocalist Dave Rotten (frontman of underground Spanish Death Metal act Avulsed) long before the New Wave Of Thrash Metal exploded massively has finally reached its final stage of evolution, culminating in an unstoppable and pugnacious thrashing beast for lovers of bands such as Dark Angel, Infernäl Mäjesty, Atrophy, Coroner and Sacrifice. In other words, it might have taken over a decade for Madrid-based steamroller Holycide to become a reality, but after listening to the crushing music from their debut album, the excellent Annihilate… Then Ask!, you’ll see the wait for this new entity created by Mr. Rotten was definitely worth it.

The intention, from the very beginning, was to create a very aggressive kind of thrash, exempt of commercial touches and focusing on the intense side of this kind of music. However, Dave was able to record the project’s first demo only in 2013, named No Escape, followed by the EP Toxic Mutiation in 2015. Although those releases might not have been exactly what Dave had in mind at first, they certainly fueled him and his bandmates to keep moving forward and become a full-bodied Thrash Metal group in the next couple of years. Featuring a kick-ass old school cover art by Andrei Bouzikov (Municipal Waste, Skeletonwitch, Toxic Holocaust), Annihilate… Then Ask! not only brings forward all the passion of the members of Holycide for the most hostile form of Thrash Metal, but it’s also the first major step in the career of a project that can now be considered one of the best and most electrifying new names of the genre worldwide.

Guitarists Miguel Bárez and Salva Esteban, together with drummer Jorge Utrera, build the stage for Dave and his demented growls in the opening track, a brutal and metallic devastation named Afterworld Remnants, a perfect sample of what the band calls “Motherfucking Thrash Metal”, followed by the insane title-track Annihilate… Then Ask!, presenting more of Dave’s sick screams supported by the reverberating bass by Dani Fernández. This is another classic chant with amazing backing vocals during its beyond-fun chorus, with the album’s crisp production boosting its already belligerent vibe. Dani continues to kick us in the head with his bass while the rest of the band delivers pure Thrash Metal for our total delight in Human’s Last Dawn, in special the awesome job done by the talented Jorge on drums and the old school guitar solos by Miguel and Salva. And following the path of icons such as Exodus, Forbidden and Overkill, the band blasts high-speed, visceral Thrash Metal that will certainly inspire you to slam into the pit in Eager to Take Control, with highlights to the always inebriate and acid growls by Dave. 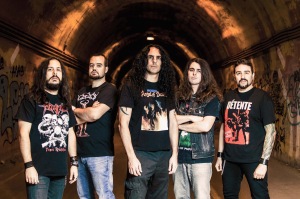 Motörhead, Holycide’s tribute to the most badass Rock N’ Roll institution of all time is flammable, potent and as thrashy as hell, with an entertaining bonus for the listener in all the references to Lemmy and his crew in its lyrics, while the band delivers unstoppable beats, classy solos and endless aggression to our ears. The next tune, Bonebreaker, is an uproarious, rhythmic and ruthless composition, with the bass lines by Dani and the riffs by Miguel and Salva cutting our skin deeply (the song could have been slightly shorter to keep the music fresh, though); whereas the band’s raging onrush of Thrash Metal goes on in full force with another furious spawn entitled Deserve to be Erased, where Dave continues to be the madman on vocals while Jorge accelerates the music with his frantic and precise drumming. Needless to say, this song should sound fantastic if played live.

Holycide’s cover version for Losers, one of the most famous songs by American Thrash/Speed Metal band Détente, is a thing of beauty, living up to the anarchy and hardcore vibe of the original version, with its guitar solos being exactly what we want in Thrash Metal, while Leather Spikes Chains & Blood carries in its name all elements we crave in good heavy music. Musically speaking, it’s a magnificent feast of slashing riffs, thunderous bass lines, powerful beats and a superb performance by Dave on vocals, supported by the song’s sick backing vocals. Put differently, it can’t get any more thrashing than this. And the album ends at maximum speed and savagery with the merciless tune Back and Forth, a demolishing hymn led by the hellish growls by Dave and Jorge’s intricate and demonic drumming. Well, what are you waiting for to have some beers and get smashed into the circle pit to the sound if this sensational song?

If you’re still not convinced about the absolute awesomeness of the music by Holycide, simply click HERE and, after around 42 minutes of sheer havoc, you’ll certainly bow your head to this amazing Spanish quintet (or at least headbang nonstop to them). Holycide can be reached through their Facebook page, where you can keep updated with everything the band is working on, while Annihilate… Then Ask! can be purchased at their BandCamp, at the Xtreem Music’s BandCamp or webstore, on Amazon or at Discogs. When you have in your hands an amazing album of old school Thrash Metal like what Holycide are offering us, you don’t ask anything. You simply annihilate whoever crosses your path.

Best moments of the album: Annihilate… Then Ask!, Motörhead, Leather Spikes Chains & Blood and Back and Forth.

Worst moments of the album: Bonebreaker.