Through fears, conflicts, uncertainties and discomfort, this Italian Darkwave trio offers the world of heavy music their latest (and unfortunately final) opus.

Through fears, conflicts, uncertainties and discomfort, the music by Italian Darkwave/Neocrust act Buioingola tells of a journey that leads nowhere, but which finds its meaning in its own becoming. Drawing influences from legendary Crust and Post-Punk bands like Amebix, Cocteau Twins, The Cure, Killing Joke and Joy Division, the mysterious Buioingola (which literally translates to “darkness in my throat”) have just released their new and final album, elegantly titled Il Nuovo Mare, or “the new ocean” in English. Nobody knows for sure If Il Nuovo Mare is actually their swansong or not, but if it is, let’s say Buioingola are retiring at the prime of their short but intense career.

Founded in 2011 in the city of Pisa, Tuscany, in central Italy, the band formed by Diego Chuhan on guitars and vocals, Omar Bovenzi on bass and vocals and Thomas Gianardi on drums and samples has been making a name for themselves since the release of their debut demo in May 2012, followed by their first full-length album, named Dopo L’Apnea, in October 2013. And now, after almost four years of “silence”, Buioingola are back with more of their wicked experimentations in seven distinct but thoroughly connected compositions, with the obscure artwork by Italian artist Marco Zanella beautifully summarizing what you’ll face during the album’s 35 minutes of their characteristic deep and doomed sounds.

Experimentations hit our ears and penetrate our minds instantly in the opening track, Polvere, where the dissonant guitar lines by Diego generate an eerie atmosphere in a great display of Post-Metal and Darkwave, with both clean and harsh vocals effectively telling the story proposed (in Italian, of course). Following that potent start, Buioingola don’t give us time to breathe, attacking our senses with a sensational avalanche of sick distortions, deranged growls and doomed riffs and beats entitled Latenza. Moreover, you might not understand a single word in Italian, but it’s quite easy to feel the poetry coming from the song’s lyrics (“Per guardare avanti cerco la forza di una memoria, / un modo di strappare il lutto al braccio / che comprime le arterie ed erode i miei arti, / un modo per tagliare la catena dell’ancora /e salpare verso lidi meno funesti”). After reaching the third track of the album, Irriconoscibile, you’ll notice all songs are connected as one entity, with the power trio offering in this case a sonic amalgamation of belligerent sounds led by the intricate, obscure and metalized drumming by Thomas, and with its second part being an ominous and exploratory voyage of modern metal music. 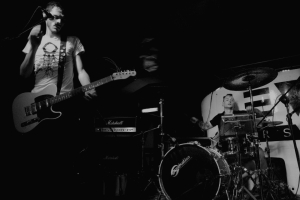 Attesa, a whimsical instrumental piece, brings forward eerie background noises with constant bursts of modern madness, followed by Eclisse, where the band gets back to a more metallic sounding with heavier guitars and Doom Metal inspired beats. Furthermore, this is the perfect sample of what Post-Doom is all about, showcasing a mesmerizing rhythm and hints of Depressive Black Metal in its last part to make it more compelling and exciting. More visceral and potent, Silenzio brings elements of traditional Black and Doom Metal added to the band’s Darkwave core, with highlights to its brutal deep growls full of anguish and to the blast beats by Thomas, before the music flows into a melancholic ending. And Il Giorno Dopo presents a dark and introspective closure to the album, being a beautiful composition by Buioingola where steady, calmer passages are the main ingredient throughout the whole song, never exploding into the savagery of all previous tracks.

One might inquire if the music by Buioingola is really metal, questioning the “metalness” of the band’s wicked creations. Not only I think it’s metal, but I also consider it high-quality music, offering us fans a distinct side of the type of music we love so much. Hence, if you want to experiment the creations by Buioingola, go check what they’re up to at their Facebook page and enjoy their music at their YouTube channel, and purchase Il Nuovo Mare (which you can listen in its entirety HERE) through the band’s BandCamp page, the Sentient Ruin Laboratories’ BandCamp or webshop, the Unquiet Records’ BandCamp or webshop, the Sangue Dischi’s webstore, on iTunes, Amazon, or at Discogs. Swansong or not, Il Nuovo Mare is definitely an album the three musicians involved should be proud of, and maybe the positive feedback it deserves from us fans of heavy music will provide the band the necessary inspiration for another Buioingola album in the future.

Best moments of the album: Latenza, Eclisse and Silenzio.

Worst moments of the album: Attesa.