Don’t cross the path of one of the most respectful bands from the Brazilian Thrash and Death Metal scene, or they will mercilessly crush you with the pulverizing music from their sensational new album. 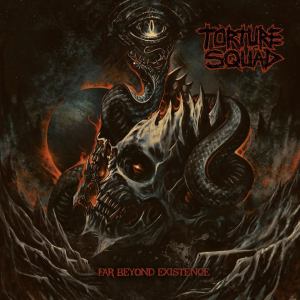 If there’s a band that beautifully epitomizes what old school underground Thrash and Death Metal are all about, that band has to be the ruthless Brazilian four-piece outfit Torture Squad who, since their inception in the distant year of 1990 in the city of São Paulo, a metropolis with almost 20 million people located in the southeast region of Brazil, has been fighting for heavy music and remained loyal to their foundations, even with all the adversities in a country where metal is far from being a popular genre. Carrying a powerful name inspired by the song “Death Squad”, by American thrash metallers Sacred Reich, and having already released seven studio albums, two live albums and three EP’s, it’s time for Torture Squad to attack humanity once again with another sensational blast of traditional extreme music, titled Far Beyond Existence, the eight full-length release in their solid and exciting career.

Featuring a somber and ominous artwork by Brazilian artist Rafael Tavarez (who has already provided his brilliant art to several other bands all over the world such as Dark Ministry, Vulture and Moonkult), Far Beyond Existence is the first full-length opus by Torture Squad to feature the she-wolf Mayara “Undead” Puertas as their lead singer, as well as Rene Simionato on guitars. As a matter of fact, although the talented Mayara and Rene already released last year an EP with Torture Squad, the excellent Return of Evil, it’s now with the band’s new full-bodied installment that they have all the room needed to showcase their refined abilities as musicians and their utmost passion for all things extreme. And they more than succeed in their mission as you’ll see when you start listening to this incendiary album of Brazilian Extreme Metal. 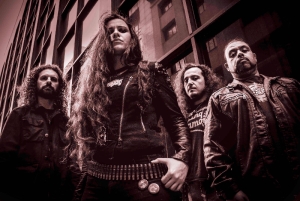 In the fantastic opening track Don’t Cross My Path, Rene presents his welcome card in the form of cutting, flammable riffs, while the band’s wardogs Amílcar on drums and Castor on bass are simply thunderous with their respective instruments. And what to say about Mayara? She’s a true unstoppable she-demon, kicking some serious ass with both her deeper guttural and her more strident screams. As the name of the song says, don’t dare to cross her path under any circumstances, unless that’s what you really want deep down inside, right? Continuing with their sonic destruction, sirens warn the listener a tempest of old school Thrash and Death Metal is about to come in No Fate, another boisterous creation by this Brazilian quartet that exhales heaviness and aggression, with Amílcar giving a lesson in drumming by being rhythmic, violent and groovy at the same time. And connecting instantly with where the previous song ended, Blood Sacrifice presents a serene and somewhat esoteric intro, suddenly exploding into belligerent Thrash Metal. Amílcar once again demolishes his drums in a fantastic way, while Mayara keeps barking, gnarling and screaming like a beast, resulting in one of my favorite songs of the album by far; followed by Steady Hands, a mid-tempo tune perfect for some intense headbanging intercalated with some faster and more furious parts, with Rene once again blasting a metallic feast of heavy and raw riffs, not to mention the great job done by Castor with his demonic bass punches enhancing the song’s heaviness to the limit.

The also superb Hate, featuring British vocalist Dave Ingram (Benediction, Bolt Thrower, Just Before Dawn) on guest vocals, is more ferocious than most of the previous songs, where the pounding drums by Amílcar are in perfect sync with Castor’s bass lines and Mayara’s grunts, and with the song’s ending being a thing of beauty tailored for smashing your skull into the circle pit. In Hero for the Ages, slashing riffs and accelerated beats generate a warlike atmosphere perfect for Mayara to attack us with her devilish guttural vocals. Furthermore, it’s truly impressive how all songs sound extremely imposing and heavy, and of course this one couldn’t be an exception to that, with Castor hitting us hard in the last part of the song with his bass guitar. The title-track Far Beyond Existence is a lesson in traditional Thrash Metal, sounding simply excellent for the band’s live concerts, showcasing a neck-breaking, galloping pace that will certainly stimulate the spawn of some intense mosh pits, all boosted by the amazing guitar solo by Rene amidst all the rumbling sounds emanating from bass and drums. And leaning towards a more obscure form of Death Metal, mainly due to the deep and enraged gnarls by Mayara and the old school riffs by Rene, Cursed by Disease keeps the album’s momentum going, with the special narration by Brazilian drummer Edu Lane (Nervochaos) and its old school lyrics (“A rotting corpse remains preserved / Receptacle of the spirit of a king / Sarcophagus was sealed with all his treasure / And on the walls the paintings bore a curse / Death will attack / With its trident / for those who disturb / The pharaoh”) spicing up the final result. 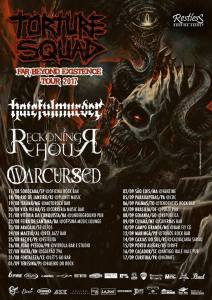 You Must Proclaim, featuring Brazilian multi-instrumentalist Luiz Louzada (Chemical Disaster, Predatory, Vulcano) as a guest vocalist (making a demonic duo with Mayara on vocals), begins with Castor punching his bass mercilessly, emanating a violent and metallic sound that grows in intensity together with all other instruments until it becomes a thrilling Thrash Metal onrush; whereas Just Got Paid,  their pulverizing version for a ZZ Top classic (which original version can be enjoyed HERE), sounds as groovy and hellish as it can be, led by the harsh vocals by guest vocalist Alex Camargo (Krisiun) and the exciting riffage by Rene. Moreover, Castor’s bass sounds once again insanely deafening, which obviously translates into sheer awesomeness. Before all is said and done, Castor and his potent bass kick off the instrumental extravaganza titled Torture in Progress, featuring Brazilian keyboardist Marcelo Schevano, with those bass wallops being the main ingredient during the song’s first part, always accompanied by Amílcar’s intricate beats. In addition, the Deep Purple-inspired keys by Marcelo bring a fresh taste to the overall musicality, culminating in almost 10 minutes of top-notch Brazilian metal. Then closing the album we have Unknown Abyss, a cinematic intro (or outro, depending on how you listen to it, as I’m not really sure why it was added as the last track of the digital version of the album) where Mayara “presents” herself to the fans of the band like a demonic entity rising from the underworld. Needless to say, it will sound fantastic as the intro to their live performances.

In a nutshell, when Mayara had the arduous mission a couple of years ago to replace Torture Squad’s longtime iconic vocalist Vitor Rodrigues, she already proved the world she was the right choice for the band, but in Far Beyond Existence her performance reached such a stunning level she has emphatically carved her name as the band’s undisputed voice (hopefully) for many years to come. If you want to know more about Torture Squad, simply go to their Facebook page for news and tour dates (if you’re in Brazil, don’t miss their Far Beyond Existence Tour 2017, which is just about to start on August 17), and to Spotify to listen to Far Beyond Existence in its entirety. You can also buy the album through the Secret Service Records’ webstore, on iTunes or on Amazon, and show all your support to high-end underground metal from Brazil, more specifically to one of the most respectful, hard-working and thrilling bands in the history of Brazilian heavy music.

Best moments of the album: Don’t Cross My Path, Blood Sacrifice, Hate and Far Beyond Existence.