The debut album by this American quartet is an obscure fusion of black, industrial, punk and electronic, and you’ll simply love this style known as “Electro Black”. 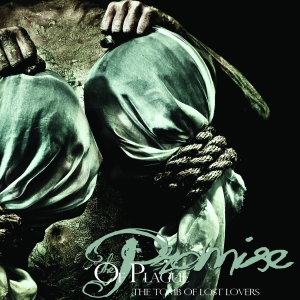 Featuring members and ex-members of bands like Abominant, Fatal Step, Astrum Empyrean Asunder, Absence of Faith, Märcoda and Assisting Sorrow, the Louisville, Kentucky-based four-piece Industrial Black Metal entity known as The Promise Of Plague is back in 2019 with their debut full-length opus entitled The Tomb Of Lost Lovers, a huge step forward for the band in terms of creativity, strength and overall sound production compared to their 2016 demo Sleepwalking Into Armageddon. Comprised of Jim Higgins and Ashley Vega on vocals, Jerry Barksdale on guitars, keys and programming, and Chris Dalton on bass, The Promise Of Plague play an obscure and piercing fusion of Black and Industrial Metal infused with Punk Rock and electronic elements, or as some people like to say, they play a fairly new style called “Electro Black”.

And their Electro Black becomes already crystal clear in the opening track You Became My Noose, ignited by cutting guitars and electronic beats intertwined with whimsical keys, with Jim alternating between demonic roars and clean, anguished vocals and also presenting symphonic nuances in the background as a welcome add-on. Tim keeps gnarling in great Black Metal fashion in The Quiet, while Jerry slashes his guitar and Ashley brings some finesse to the music with her vocals in a short and sweet display of modern Industrial Black Metal; followed by These Stones Were Meant To Be Thrown, where its imposing and rockin’ vibe reminds me of the primeval days of the unparalleled Cradle of Filth. Furthermore, Jerry and Chris are ruthless with their stringed weapons, while Jim and Ashley make an amazing duet once again exhaling anger, passion, melancholy and darkness from their vocal lines, sounding at the same time furious and doomed. And what can I say about their cover version for Venom’s Warhead? It’s just as raw and infernal as the original one released in 1984 (check it out HERE), showcasing a great job done by Jerry with his scorching hot riffs and the hints of Doom Metal added to the musicality to make it more demonic. 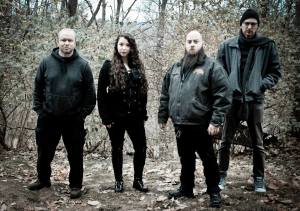 Then leaning towards the classic Doom Metal played by Black Sabbath and Celtic Frost we have Insolent, sounding and feeling considerably different from the previous songs of the album and presenting another spot-on performance by both Jim and Ashley on vocals. In other words, it’s dark, heavy and damned, ending in the most melancholic and beautiful manner you can think of. Chris’ low-tuned bass lines fill every empty space in the somber Mine Is A Place Called Hell, where Ashley’s clean vocals make a very interesting paradox with Jim’s hellish screeches in what’s perhaps the most electronic of all songs, perfectly depicting what Electro Black is all about. And lastly, the title-track Tomb Of Lost Lovers is a rumbling and dancing hybrid of classic Black Metal with electronic music, with Jerry bringing tons of epicness with his keys. Not only that, it should work really well at a dark electro party, with all band members delivering sheer aggression and electricity form their respective instruments.

I guess after reading this humble review of The Tomb Of Lost Lovers you got really curious about what Electro Black is, right? If your answer is yes, go check what The Promise Of Plague are up to on their official Facebook page, and grab your copy of the album directly from the band’s own BandCamp page. In a nutshell, The Promise Of Plague might not be reinventing the wheel with their fusion of metal and non-metal styles, but they have certainly unleashed an interesting and entertaining beast of heaviness, fury and darkness with their debut album, pointing to a very healthy future for the quartet and, who knows, inspiring more underground musicians who are starting their careers in heavy music to venture through the realms of Electro Black, a subgenre of metal that will never go mainstream without any doubt, and we’ll always love it that way.

Best moments of the album: These Stones Were Meant To Be Thrown and Insolent.