Back from the very depths of the underworld, this unrelenting Polish entity is ready to crush our senses once again with their unique and scorching fusion of Black and Death Metal. 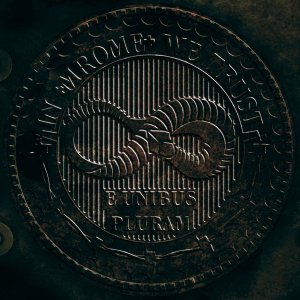 Poland’s own Black and Death Metal entity +MROME+ is back from the very depths of the underworld once again to crush our senses with the unique and scorching music found in their brand new album, curiously entitled Leech Ghetto. Furthermore, as already expected (or not), the new opus by +MROME+, who are now a trio with the addition of bassist LV’s, joining lead singer and guitarist Key V and drummer P in their quest for heavy music, is completely different from their 2016 album Noetic Collision on the Roof of Hell, yet still maintaining the band’s core essence and heaviness intact, working as a new start and keeping the band’s unpredictability as high as possible just the way we like it. Add to all that the wicked guest vocals by Ataman Tolovy (from Polish Experimental Black Metal band Túrin Turambar) in a couple of songs, and there you have an excellent DYI album highly recommended for anyone in pursuit of innovative and obscure metal music.

And Key V’s guitar ignites the engines of the opening track titled The Rogue, a mid-tempo, dark tune perfect for breaking your neck headbanging, also presenting a very welcome thrashing twist that makes it truly incendiary. Then ominous riffs and beats permeate the air in Born Old, which sounds like a hybrid of the music by Obituary, Exodus and Celtic Frost, just to name a few (and to show you how insane it sounds), with P being very precise with his drums, delivering aggressiveness and intricacy and, therefore, being tailored for fans of 80’s and 90’s heavy music; whereas in Anti-Ant Entante the band ventures through more rockin’ lands, with Key V’s raspy roars and razor-edged riffs piercing your soul mercilessly while LV’s and P keep the ambience thunderous with their respective bass and drums.

Led by LV’s metallic bass, The City of Opax offers our ears a significantly different start from all previous songs, sounding melancholic and grim and evolving into a very introspective tune, proving once again how wide the band’s range is when crafting their music. Featuring the aforementioned Ataman Tolovy on guest vocals, the stylish Coffin Nail is a feast of demented sounds as if Faith No More went Death or Thrash Metal, showcasing steady beats, wicked gnarls and a feeling of insanity as its main ingredients, and the trio continues to extract Stygian sounds form their instruments in Detroit Daze, especially LV’s with his groovy jabs, bringing elements from Progressive Metal to their already multi-layered music. Not only that, all of its changes and variations turn it into a very pleasant musical journey that will certainly smash your mind in the best way possible.

Ataman Tolovy returns in Twarz Niezawisła (“an independent face” from Polish), perhaps the most obscure and atmospheric of all songs, blending the thunder from Doom Metal with alternative and experimental music, followed by Bellies Grow, and let me tell you that the second to last blast of insanity by +MROME+ sounds and feels it was taken straight from the 80’s while having a futuristic touch at the same time, as if The Misfits and Motörhead had a bastard son. Do you understand now how multi-layered their music is? Anyway, Key V’s riffs dictate the rhythm in this distinguished tune, while P doesn’t stop pounding his drums for our total delight. And LV’s and his rumbling bass kick off the closing tune Primordial Soup, bringing forward slashing guitars, in-your-face, straightforward beats and aggressive vocals, flowing darkly until its venomous ending. Can this song be added to the official soundtrack of a Tarantino movie, please?

In a nutshell, +MROME+’s Leech Ghetto, which will really soon (aka later this week) be available on Spotify for a full listen and on the band’s own BandCamp page for purchase, continues to pave the band’s path of madness while sounding fresh and distinct from their previous releases as already mentioned, leaving us all disoriented and eager for more of their music in the coming years. We just can’t predict at all what Key V and his bandmates have in mind for their next album, but again that’s the beauty of their music and I truly hope they never change while they keep always changing (if that makes any sense to you).

Best moments of the album: The Rogue, Coffin Nail and Detroit Daze.