Dealing with the apocalyptic reality we live in, the debut EP by this Qatar-based quartet brings to our ears a classic fusion of Death, Black and Thrash Metal.

Blending traditional Death Metal with a myriad of sounds ranging from Thrash and Black Metal to classic Heavy Metal and even Progressive Rock since their inception in 2015, the up-and-coming Doha, Qatar-based hellraisers Abanoch are the sole Extreme Metal band hailing from their homeland playing original music, proudly carrying the flag of metal and defying all social and religious norms wherever they go. Now in 2020 the quartet comprised of Almarri on vocals and rhythm guitars, Sefiroth Ounane on lead guitars, Dahman Ouzzane on bass and Geoff Fontillas on drums aims at new heights with their debut EP Buried And Left Behind, an awesome warm-up for their first full-length opus which is currently scheduled to be released by the end of this year. Taking their name from ancient Middle-Eastern demonology, more specifically from a book titled The Sun of Major Knowledge (or The Sun Of Knowledge & Kindly Knowing) by Ahmed Bin Ali Al-Bonny, meaning a demon king who ruled the Sabbath, Abanoch deals with the apocalyptic and dark reality we live in in their new album, calling for Abanoch’s saving in all his glory to take us out of this reality.

The quartet begins hammering their instruments mercilessly in The Rise Of Abanoch, led by the electrifying riffs by Almarri and Sefiroth while Geoff smashes his drums in great Death Metal fashion, also presenting eerie, atmospheric passages and a huge amount of adrenaline and rage. Then another round of their solid and intricate Death Metal comes in the form of Five Spells, with Almarri’s demonic screeches and roars adding an extra touch of darkness to the music while Almarri himself together with Sefiroth and Dahman keep the ambience aggressive and sharp with their stringed weapons; whereas in End Of Times the band mixes the violence by bands such as Death and Cannibal Corpse with the obscurity and epicness of Cradle Of Filth, with its demonic growls, slashing riffage and nonstop blast beats turning it into an amazing option for slamming into the circle pit, all spiced up by a spot-on guitar solo by Sefiroth. The title-track Buried And Left Behind brings forward the most metallic and cutting riffs of the entire EP, resulting in a Death Metal feast tailored for admirers of the genre with Geoff dictating the pace with his rhythmic and berserk beats, and lastly, venturing through more thrashing and visceral lands, the band offers us all Treacherous Ways, highly inspired by 80’s Thrash and Speed Metal and showcasing an amazing job done by both Almari and Sefiroth with their scorching shredding, reminding me of the early days of Megadeth. In other words, get ready for over eight minutes of experimentations, epic riffs and fast beats, flowing smoothly until its climatic finale. 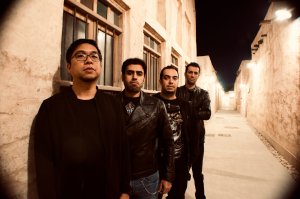 You can enjoy Buried And Left Behind in its entirety on YouTube and on Spotify, but of course in order to show your true support to Abanoch you should follow them on Facebook and grab your copy of the album from their own BandCamp page. The metal scene in Qatar is making its baby steps, and with our support in spreading the word the guys from Abanoch hope they can encourage more bands to come out and create music in their homeland, elevating the importance of extreme music all over the country and, therefore, opening the minds of their young generation to the beauty of Death, Black and Thrash Metal. Just like in the aforementioned book, Abanoch are among us to save us all from our harsh reality with their first-class extreme music, with Buried And Left Behind representing only the first step in their promising career.

Best moments of the album: The Rise Of Abanoch and Treacherous Ways.