An unrelenting Polish entity returns with their sophomore full-length opus, presenting a new sound directed towards classic Death Metal from the 90’s. 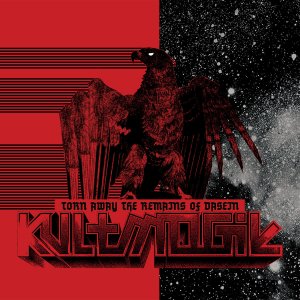 Almost three years after the release of the EP Portentaque, Tarnów, Lesser Poland-based Blackened Death Metal entity Kult Mogił is back from the pits of the underworld with a brand new full-length album entitled Torn Away the Remains of Dasein, presenting to the listener a new line-up and, more important than that, a new energy and sound directed towards a more classic Death Metal style from the 90’s when compared to their debut full-length opus Anxiety Never Descending. Mixed and mastered at Satanic Audio by Haldor Grunberg and featuring a stylish cover artwork by Polish artist Sars (Gruzja, Odraza), Torn Away the Remains of Dasein reeks of pure violence from start to finish, showcasing all the talent and passion for extreme music by lead singer and bassist Deimos, guitarists Rzulty and Thisworld Outof, and drummer The Rays. “Instead of following trends of fashionable playing, we’re heading in the opposite direction, going back to the roots of death metal even more than before. This is our most essential recording, devoid of layers of sludge and other popular additions from previous releases. We want the new songs, stripped of these ornaments, to defend themselves with strong, load-bearing riffs. This album is 100% devoid of the desire to be avant-garde or experimental. We are destroying the previously developed formula so that we can on its ruins pay homage to the classics of the genre,” commented the band about their vicious new album.

And the opening track Hunger of Pride is the perfect depiction of this new version of Kult Mogił, sounding and feeling absolutely ominous, disruptive and violent from the very first second, with Rzulty and Thisworld Outof showing no mercy for our souls with their infernal riffage while Deimos roars and growls rabidly, resulting in a putrid Death Metal feast infused with Black Metal nuances. Then wicked sounds ignite another awesome display of brutality titled White.Death.Implosion, where The Rays sounds vile and demented on drums by blasting sheer havoc through his beats, therefore providing his bandmates all they need to shine with their venomous growls and sick riffs and solos, and not giving us a single second to breathe, the quartet fires the also hellish Blackened Death Metal tune Torment of Dasein, bringing to our ears pure savagery flowing from all instruments, with Deimos doing a fantastic job with both his guttural vocals and his menacing bass punches. In Idols in Blood we’re treated to an austere onrush of Black and Death Metal sounds spearheaded by the rhythmic and groovy beats by The Rays, while Rzulty and Thisworld Outof don’t stop extracting razor-edged riffs from their axes, reminding me of the total darkness of the early days of their countrymen Behemoth, whereas in A Wax Reverie the band adds hints of Doom Metal to their already otherworldly sonority, smashing our skulls once again and blending the gore of bands like Cannibal Corpse and Six Feet Under with their own share of dementia. And lastly, the rumbling bass by Deimos ignites the closing tune Fountain of Affliction, where the band’s guitar duo fires an endless amount of sulfur and rage from their stringed weapons while The Rays sounds like a bulldozer on drums, ending the album on an utterly obscure and aggressive note.

In case you’re not familiar with the music by Kult Mogił, I highly recommended you go take a good listen at their previous releases before listening to Torn Away the Remains of Dasein in full on YouTube to have a clear understanding of the musical evolution explained by the band until reaching their current shape and form, showing that the adjustments they made to their sound were more than welcome and spot-on, therefore pointing to a bright future to such obscure unity hailing from Poland. In addition, don’t forget to give the guys from Kult Mogił a shout on Facebook, and to grab your copy of Torn Away the Remains of Dasein from the Pagan Records’ BandCamp page or from their webstore in CD, black LP or red LP formats. After such pulverizing album, I wonder if Kult Mogił will continue to venture through even more classic Death Metal lands, if they’ll succumb to the darker side of Black and Doom Metal, or if they’ll simply merge all of their influences and all those styles into something new and fresh. As a matter of fact, it doesn’t matter what the final result is, as long as they keep bringing forth amazing records like Torn Away the Remains of Dasein we can rest assured the underground Polish scene will remain alive, vibrant and as brutal as it can be.

Best moments of the album: White.Death.Implosion and Idols in Blood.