Spelling a shift in its musical direction with a faster and more aggressive sound, this Canadian one-man army will rock your world with his classic fusion of Speed and Heavy Metal. 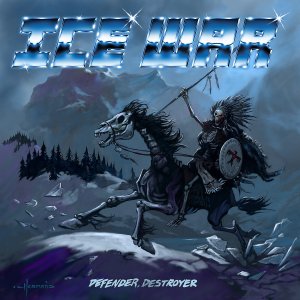 After the dissolution of his previous band Iron Dogs in 2015, the unstoppable Ottawa, Canada-based metaller Jo “Steel” Capitalicide (also known for his contribution to some amazing underground bands such as Aphrodite, Dexezon and Expunged) has been on a roll with his solo project entitled Ice War, releasing a stream of demos, EP’s and full-length albums at full force, culminating with the release of his fourth full-length opus now in 2020, the fulminating Defender, Destroyer. Featuring a beyond classic artwork by Canadian artist Didier Normand, the album is Jo’s personal tribute to all things Speed, Heavy and Thrash Metal with a Punk-ish, Hardcore twist, being highly recommended for fans of the music by Savage Grace, S.D.I., Razor and Iron Angel, among others, to the very first Helloween EP from 1985, spelling a shift in the project’s musical direction with a faster and more aggressive sound.

Jo begins slashing his stringed ax in great fashion in the opening track Power from Within, an ode to 80’s Thrash and Speed Metal infused with Punk Rock elements, while at the same time he pounds his drums nonstop and fires his raspy, rebellious vocals with a lot of power, followed by the thrashing title-track Defender, Destroyer, where Jo sounds even more berserk and mental, showcasing flammable riffs and rumbling bass punches while inviting us all to slam into the circle pit to the sound of his unstoppable beats. And Soldiers of Frost is even faster and more electrifying than its predecessors, with Jo giving a lesson in feeling and passion for old school metal music, resulting in the perfect composition for singing along with our talented lone wolf, not to mention how incendiary his riffs and solos are.

And there’s no sign of slowing down at all, as Jo keeps hammering our heads with his high-octane fusion of Thrash and Speed Metal with Hardcore elements in Rising from the Tomb, where it’s impressive how he sounds like a full-bodied band even being absolutely by himself. Then it’s time for a mid-tempo, headbanging metal extravaganza titled Mountains of Skulls, where Jo keeps vociferating like a beast and shredding his strings beautifully, reminding me of the early days of bands like Exodus, Metallica and Megadeth, whereas in Crucified in Fire he ventures through more traditional Heavy Metal lands, bringing forward high-pitched screams amidst his always thrilling riffage and blast beats, never letting the level of adrenaline go down and, therefore, inspiring us to keep raising our fists to his ass-kicking music. After such high-speed exhibit we’re treated to another round of classic thrashing sounds and tones in Demonoid, where Jo focuses on his strident riffs and the song’s old school lyrics, resulting in pure Speed Metal made in Canada tailored for metalheads who enjoy having a cold beer while crushing their skulls into the circle pit. 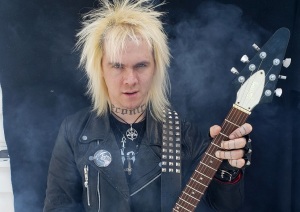 It looks like Jo is never tired of delivering tons of electricity and rebelliousness through his music, which is also the case in the Punk Rock-infused tune Skull and Crossbones, presenting a rumbling atmosphere due to his metallic bass punches and reverberating drums, and in Running Out of Time, with his vocals getting more and more enraged and inebriate, sounding as one of his biggest personal tributes to metal from the 80’s, bringing to our ears vicious riffs and solos while the rhythm remains as insane as possible thanks to his hellish blast beats. Finally, there’s nothing better to properly close an album then with a groovy and insurgent hymn the likes of Breakaway, where Jo generates a rowdy ambience with his unstoppable guitars, bass and drums, building the perfect atmosphere for delivering his classic roars, ending Defender, Destroyer in a very melodic and epic way for our vulgar delectation.

You can show your support to this talented one-man army hailing from Canada by following Ice War on Facebook and on Instagram, by listening to more of his classic metal music on Spotify, and above all that, by purchasing your copy of Defender, Destroyer from the Fighter Records’ BandCamp page or from the Xtreem Music webstore sooner than you can say “Speed Metal”, keeping the unrelenting Jo “Steel” Capitalicide pumped up and ready to rock wherever he goes. Defender, Destroyer has no artificial elements, no special effects, nor any kind of innovation; it’s a straightforward, in-your-face album of classic Speed Metal deeply rooted in the 80’s, and that’s precisely what Jo needed to bring forth in his new album to truly shine. Well, let’s say that he more than succeeded in that, taking us all on a frantic and vibrant journey to the 80’s and, consequently, putting a huge smile on the faces of everyone who loves the music from that glorious decade from the bottom of their metal hearts.

Best moments of the album: Defender, Destroyer, Soldiers of Frost and Demonoid.