Get ready to rock to the debut album by four young musicians hailing from the UK, offering us all ten electrifying songs dealing with the struggles of growing up in the digital age of expression.

Formed early in 2016 by Alex Mancini, then aged 15 as lead singer, and four friends from the Music and Performing Arts Service in Salford, a large English town directly west of Manchester city center, Bolton-based Hard Rock outfit Unknown Refuge offers an accomplished, mature sound and performance that will set your fillings on edge despite the young ages of its members, those being the aforementioned Alex Mancini on vocals and bass, Jack Tracey and Harry Skinner on the guitars, and Morgan Deveney on drums. Now in 2021 it’s time for such promising act to unleash upon us their debut album, entitled From The Darkness, a 10-track electrifying opus showcasing forward-thinking from those young rockers and demonstrating laser-sharp musicianship accompanied by thoughtful songwriting, telling the evolution of a songwriter’s life growing up as a teenager, the personal interests during those years as well as capturing some of the struggles faced while growing up in the digital age of expression.

The cinematic, obscure intro From The Darkness sets the stage for the quartet to kick some ass in To The Light, where Jack already fires a sick guitar solo as his welcome card, accompanied by the classic vocals by Alex and the rhythmic beats by Morgan, blending the most incendiary elements form Hard Rock, Rock N’ Roll and old school Heavy Metal. Then with Alex’s menacing bass and Morgan’s heavy beats generating a thunderous ambience, the band fires the old school feast titled Kicked To The Floor, highly recommended for fans of the modern rock and metal music crafted by Alter Bridge; and it’s time for the boys to put the pedal to the metal and blast a Motörhead-fueled rockin’ tune titled Battle Hymn, showcasing slashing riffs by Jack and Harry while Alex leads his crew with his straightforward vocals and thunderous bass punches. And Shadows is another great composition by Unknown Refuge, bringing elements from the music by Volbeat and Godsmack to their core Hard Rock, with Morgan pounding his drums mercilessly nonstop.

Presenting hints of 80’s Heavy and Progressive Metal, which only proves how versatile the band is, Palace Walls is slightly darker than its predecessors, with Jack and Harry showcasing another awesome job on the guitars, not to mention how smoothly Alex’s vocals flow from start to finish, whereas razor-edged riffs ignite the also fun and vibrant Wall Of Lies, once again blending the past and present of rock music and with its thrilling pace being led by the rhythmic drumming by Morgan. Following such entertaining song, we face another round of their kick-ass modern-day Hard Rock in If The Gods Be Good, with Alex being supported by the band’s classic backing vocals, therefore being perfect for hitting the road or raising your horns on the dance floor. And speeding things up a bit, the quartet fires the Godsmack-inspired extravaganza I’m Not A Bad Guy, offering a hybrid of Alternative Rock and Metal with old school thrash the likes of Metallica, also with Jack and Harry being on absolute fire from start to finish. And last but not least, old school, epic riffs kick off the closing tune titled Journey, with its headbanging rhythm and dense atmosphere being exactly what Alex needs to declaim the song’s pensive words, putting a climatic ending to such powerful album of Rock N’ Roll. 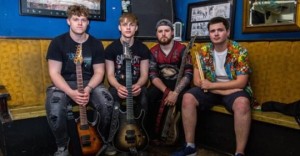 It’s quite easy to join the boys from Unknown Refuge in their quest for Rock N’ Roll. All you need to do is follow them on Facebook and on Instagram, subscribe to their YouTube channel, stream their music on Spotify, and above all that, grab your copy of From The Darkness from their own BandCamp page or Big Cartel (where by the way you’ll find an amazing bundle containing a CD, a charcoal grey Unknown Refuge shirt and four beer mats), or from Apple Music. Growing up as a teenager anywhere in the world nowadays is a true pain in the ass, but there’s nothing better than our good old Rock N’ Roll to guide us through such difficult times, just like what Unknown Refuge did in their debut album. That being said, how about hitting the dance floor to the high-octane music found in From The Darkness? It doesn’t matter if you’re a teenager or a grown-up, that will definitely make your day a lot better.

Best moments of the album: To The Light, Battle Hymn and I’m Not A Bad Guy.