A talented and hardworking musician from Chile channels all his anger in his debut EP, overflowing Thrash and Speed Metal for our total delight. 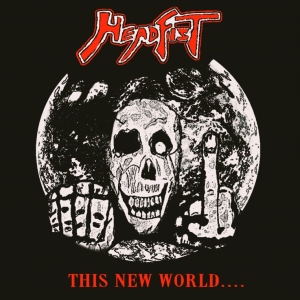 Formed by guitarist Cristóbal Perez in Chile’s capital Santiago earlier this year as a four-piece act, but currently having Cristóbal as its sole member (with the support of session vocalist Michel Hoogervorst of Dutch Heavy/Thrash Metal band KFFR), the newborn Thrash/Speed Metal entity Headfist has just released their debut EP This New World…., following up on their 2022 two-track self-titled demo. Comprised of six songs clocking at 20 minutes of pure speed and insanity, the EP is according to Cristóbal himself highly influenced by Motörhead, Overkill, Exodus, Anvil, Anthrax, Testament and Iron Maiden, among others, allowing him to channel all his anger while the lyrics deal with the adversities most musicians face in life when trying to create new music.

Uncertainty is a very melodic intro inspired by renowned acts such as Megadeth and Testament, exploding into the high-octane and rebellious This World, with Cristóbal slashing his guitar in great fashion, firing caustic riffs and solos while Michel roars manically in the name of 80’s Thrash Metal. Then pounding drums and endless heaviness are the main ingredients in What a Nice Way to Live…, another incendiary tune by Headfist with nuances of Hardcore and Punk Rock added to its already violent core; whereas the soaring vocals by Michel add an extra touch of insanity to the music in Instinct to Kill, where once again the Speed Metal riffage by Cristóbal lives up to the legacy of the genre. It’s time to put the pedal to the metal as Headfist invites us all to slam into the pit to the sound of Reign of Treason, sounding like a Chilean version of Anthrax with Cristóbal’s sharp riffs and solos bringing that welcome dirt to the overall result. Lastly, the song that carries the name of the band, Headfist, overflows electricity and rage, with Michel and Cristóbal being in perfect sync and, therefore, offering us all another hurricane of Thrash and Speed Metal.

While the EP can be heard in full on YouTube and on Spotify, the talented Cristóbal is currently looking for musicians who nurture the same passion as he does for heavy music, and who are also willing to embark on the hard and difficult (but exciting) path to create high-quality metal music. Hence, if you think you have what it takes to be part of Headfist, or if you just love Speed Metal and want to show Cristóbal all your support, go check what he’s up to on Facebook and purchase a copy of This New World…. from Apple Music. Hopefully, Cristóbal will quickly find some skillful metallers to join Headfist and become once again a full-bodied band, because the music found in his debut EP is excellent, it perfectly represents what the underground is all about, and above all that, it exhales Heavy Metal. We need more of the music by Headfist, no doubt about that.

Best moments of the album: This World and Reign of Treason.