Let the music from the sophomore album by this Belgian Symphonic Metal trio embrace you, showcasing a continuous evolution of their sound. 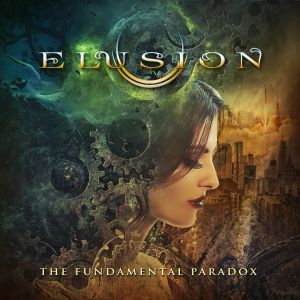 Fans of Beyond the Black, Ad Infinitum, Epica and Within Temptation, among several other big names of the European symphonic and melodic scene, will have an amazing time listening to The Fundamental Paradox, the sophomore effort by a Belgian Symphonic Metal band that goes by the stylish name of Elusion. Currently formed of Evy Verbruggen on vocals, Domingo Smets on the guitars and backing vocals, and Frederik Van Mieghem on drums, the trio showcases a continuous evolution of the Elusion sound in their new installment compared to their debut album Singularity, released back in 2019, living up to the legacy of the genre while also carving their name in the underground Belgian scene by offering our avid ears nine solid songs throughout the album’s 42 minutes of music.

In the opening tune …In Love and War we already face a huge dosage of classic Heavy Metal added to their core Symphonic Metal thanks to the incendiary riffs by Domingo, with Evy kicking ass with both her strident clean vocals and her she-demon gnarls, whereas the sound of the rumbling bass will punch you in the head in the also electrifying Chiaroscuro, with Frederik dictating the song’s pace behind his drums, therefore offering Evy the perfect ambience for her soaring vocals. Acrimonious is even groovier and more metallic than the previous songs, with Domingo and Frederik being in absolute sync with their sonic weapons, once again sounding a lot more modern than classic Symphonic Metal mainly due to its Progressive and Groove Metal nuances. And there’s no sign of slowing down as the trio keeps embellishing the airwaves with their sharp music in Adversity, presenting another awesome performance by Evy on vocals supported by the crushing beats by Frederik and all of the song’s background elements.

The first single of the album, entitled Science|Fiction, brings to our avid ears more of the band’s incendiary Symphonic Metal spearheaded by the razor-edged riffage and solos by Domingo; and the tribalistic vocalizations by Evy ignite the next tune, titled From the Woods to the Water, a solid piece by Elusion despite lacking the same energy of the rest of the album. It’s then time to blast a purely European Symphonic Metal tune named In Balance, where Domingo keeps extracting endless electricity from his axe accompanied by the pounding drums by Frederik; whereas enhancing their epicness and emotion, the trio fires the symphonic extravaganza Isochronism, showcasing classic riffs, hammering drums, stunning orchestrations and the always enfolding vocals by Evy. Lastly, after such charming song the band closes the album on a high note with Deafening Silence, bringing forward another round of the metallic guitars by Domingo and the vicious but intricate beats by Frederik. 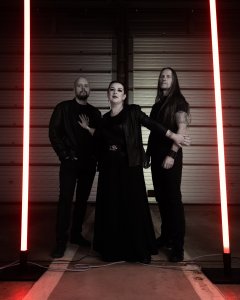 If you want to know more about Evy, Domingo and Frederik, listen to more of their their music, and stay up to date about their tour dates and plans for the future, you can find those Belgian metallers on Facebook, on Instagram, on YouTube, and on Spotify, and above all that, you can grab your copy of The Fundamental Paradox from the band’s own BandCamp page. After listening to each and every track from The Fundamental Paradox, we must all agree that Elusion are hands down one of the most interesting names of the Belgian Symphonic and Melodic Metal scene, with their newborn opus representing not only a big step in their career, but it’s also another must-listen album made in Belgium, leaving us eager for more of their refined music in a not-so-distant future.

Best moments of the album: Adversity, Science|Fiction and In Balance.

Worst moments of the album: From the Woods to the Water.