There might be silence in the snow during this coming winter, but there was surely a lot of good noise and blazing hearts on the last night of the summer in Toronto. 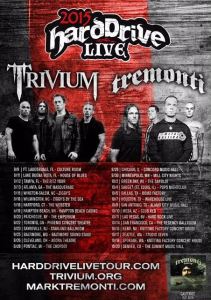 Unfortunately, due to traffic and working issues, I cannot say anything about the performance by American Hard Rock/Rock N’ Roll band WILSON, who were in charge of warming up the crowd for the main attractions of the night at the Phoenix Concert Theatre as part of the 2015 HardDrive Live Tour. All I can say is that if you’re curious to know how their music sounds, two very good songs are Give ‘Em Hell and College Gangbang, both part of their setlist. And, in addition, in case your first or last name is “Wilson” I suggest you go after their merchandise right away. Who wouldn’t love to have your own name on a cool T-shirt like this one? Maybe next time they’re around I’ll go check their live performances, but this time the Gardiner didn’t allow me to do so.

For those of you who don’t know this excellent guitarist, award-winning American musician MARK TREMONTI is the lead guitarist and founding member of the famous rock groups Creed and Alter Bridge, and since 2012 he’s been on the road with his solo project that takes his last name, being also responsible for the band’s lead vocals. And that’s probably the main reason why there were so many people eager to see Tremonti, I would say almost the same amount that were at the venue to see Trivium, because not only his music is clean and cohesive, but also fun.

Playing a mix of Hard Rock, Rock N’ Roll, Speed Metal and Alternative Metal, this Detroit-based band did a pretty good job during their relatively lengthy setlist, which ended up extending their concert to past 10pm and therefore “forcing” some people to go home before Trivium started due to different reasons, such as work or classes the next morning. I’ll be 100% honest and say that their music is not really my cup of tea, but I enjoyed their performance as much as I could while having a cold Rolling Rock. Perhaps the biggest issue with the concert was the huge amount of ballads, because when they played heavier stuff you could feel a much stronger reaction from everyone at the venue.

I’m not familiar with the names of the songs either, but if there were two that caught my attention were curiously the very first, Cauterize, and the very last, Decay, due to their strength and speed. In other words, if you’re more into old school metal music (including really heavy stuff like Death and Black Metal) like I am you might consider Tremonti a bit too light for your taste, but as a straightforward rock band they more than deliver it on stage.

After a short pause to the sound of the entire Ace Of Spades album, by Motörhead, lights went down and like many bands do, the speakers played a classic song TRIVIUM truly love to ignite the hearts of the fans waiting for their performance. Well, they chose the all-time battle hymn “Run to the Hills” by Iron Maiden for that. Do I need to say more? After that brilliant demonstration of passion for metal music and after their own intro Snøfall, our already iconic and influential Orlando-based metallers hit the stage between two giant skulls from their new album with one of their brand new songs, the good Silence in the Snow. Matt was electrified as usual, wearing a Dio T-shirt and an Emperor vest, again showing his respect and admiration for his idols in music and his loyalty to his roots, while Corey Beaulieu, Paolo Gregoletto and Mat Madiro interacted with the fans as much as possible during and between songs to make things even better.

I know some people are complaining Matt doesn’t want to scream anymore, but all three new songs (Silence in the Snow, Until the World Goes Cold and especially Blind Leading the Blind, which Matt dedicated to the unparalleled Ronnie James Dio while telling a story about food and friendship when they opened for Heaven & Hell in Japan in 2007) sounded truly powerful live, proving the harsh screams are not really necessary for them to work. However, as an old school metalhead I have to say it was when they played their classic assaults Throes of Perdition, Pull Harder on the Strings of Your Martyr and A Gunshot to the Head of Trepidation that things got really serious inside the mosh pits. Moreover, although Corey was incredible with his guitar, I think he seemed a little “lost” during the songs without the harsh screams. Let the guy scream, please! 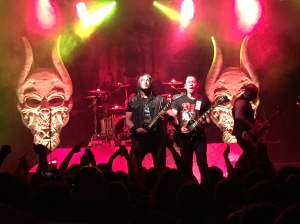 And I was impressed (actually, the whole band was too) with the insane reaction of the crowd for each and every song of their setlist, in special their “newer” classics Strife (including a loud and awesome “Oh-oh-oh… Oooooh!” to its Iron Maiden-ish riffs, as demanded by Matt), Built to Fall (what a “built-to-fall” image seeing everybody singing the whole song at full force with Trivium!) and Black, showcasing how thrilling In Waves and Vengeance Falls are despite some diehard fans not digging those albums. Not to mention the amazing turmoil caused by the fans during the superb duo Capsizing the Sea/In Waves, which started with a decent wall of death just for you to have an idea of how crazy fans were. The band noticed that, enjoyed that and acknowledged that on their social media, saying Toronto was the best crowd of the entire tour. I have to agree with them, it was indeed a fantastic night, much better than their last concert back in 2013 at the same venue.

And in order to keep us all craving for more Trivium and more metallic tunes, the sound system played the masterpiece “Heaven & Hell” by Black Sabbath, which was sung by most fans so excited everybody got after Trivium finished their flawless performance. Now let’s wait and see how their entire new album sounds like, if there won’t be any screams at all or if they’ll still offer us some harsher moments like the ones we learned to love from their music. It might have been the last night of summer in Toronto, but it was more than enough to keep our hearts on fire through the fall and the winter, even if there’s total silence in the snow that’s about to come soon.

Encore:
Capsizing The Sea
In Waves