It’s time to join Trivium in the court of the dragon to the sound of their magnificent new opus.

After getting back on track with their two previous albums, those being the excellent The Sin and the Sentence, released in 2017, and What The Dead Men Say, released in the beginning of 2020, Orlando, Florida-based Heavy Metal unity Trivium continues to deliver their trademark fusion of violence, speed and intricacy with their newborn spawn, beautifully titled In the Court of the Dragon, the tenth studio album in their beyond solid career. Produced by Josh Wilbur and mastered by Ted Jensen at Sterling Sound, In the Court of the Dragon sounds and feels even better than its predecessors, proving the isolation during the pandemic was extremely productive for vocalist and guitarist Matt Heafy, guitarist Corey Beaulieu, bassist Paolo Gregoletto, and drummer Alex Bent, who as I always like to say elevated Trivium’s sound to a whole new level after joining the band in 2017, and in their new album he sounds even more awesome than usual.

Composed and arranged by Emperor’s own Ihsahn, X is an epic, dark and cinematic intro that warms up our senses for the fulminating In the Court of the Dragon, where Matt begins screaming the song’s powerful lyrics (“In the court of the dragon / Death of gods and world / In the court of the dragon / You will know your worth”) accompanied by the headbanging riffs and beats by Corey and Alex, whereas an imposing start morphs into sheer adrenaline in Like a Sword Over Damocles, with Matt and Corey kicking ass on the guitars while Paolo makes the earth tremble with his bass jabs. Needless to say, Alex adds tons of intricacy and feeling to this already fantastic composition, turning it into my favorite of the entire album. Then we have Feast of Fire, the second single of the album and a solid, traditional Trivium song, albeit not as powerful as the rest of the album. Then it’s time for another frantic, high-octane creation by the quartet named A Crisis of Revelation, providing an excellent balance between their heaviest side and their more melodious, clean sounds, and if played live it will surely ignite some fun mosh pits during their live concerts.

In The Shadow of the Abattoir we’re treated to a gentle beginning to the deep, clean vocals by Matt, evolving into another complex Melodic Death and Heavy Metal feast spearheaded by Alex and his unstoppable drums and spiced up by their sick guitar solos; and more of their groovy sounds are offered to us all in the neck-breaking No Way Back Just Through, with Matt once again thriving with both his clean singing and enraged roars. A massive wall of sounds will hammer your head mercilessly in Fall Into Your Hands, even heavier and more detailed than its predecessors, where Matt screams nonstop from the bottom of his heart while his bandmates add elements from Progressive, Death and even Symphonic Metal to their core sonority. It looks like the guys form Trivium wanted to offer endless heaviness in their new album, and they more than succeeded in that as From Dawn to Decadence is another bestial Metalcore tune where Matt, Corey and Paolo are in absolute sync from start to finish with their infernal riffage and bass. Lastly, closing the album we face one final round of their trademark wicked lyrics in The Phalanx (“Within the thrill, amidst the kill / One against all, soon blood will spill / We cannot wait to make your pain / We are the burn inside your brain”) amidst a hurricane of heavy sounds that lasts for stunning seven minutes. 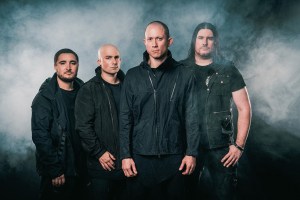 Trivium are a band that at the same respects their past while always looking towards the future, and In the Court of the Dragon (available for a full listen on YouTube and on Spotify) is the perfect depiction of that, pointing to an even brighter future ahead of those four talented metallers who are becoming one of the most important bands of the current scene worldwide. Hence, don’t forget to follow them on Facebook, on Instagram and on YouTube for news, tour dates, and more of their sick music and videos, and if you want to add the majestic In the Court of the Dragon to your personal collection, you can purchase it from their official webstore, or click HERE for several other places where you can buy the physical or digital copy of the album. As the lyrics to the title-track say, “in the court of the dragon you will know your worth”, and if you’re there to the sound of Trivium’s new album, you can rest assured the “dragon” will provide you with exactly what you deserve.

Best moments of the album: In the Court of the Dragon, Like a Sword Over Damocles, A Crisis of Revelation and Fall Into Your Hands.

Worst moments of the album: Feast of Fire.