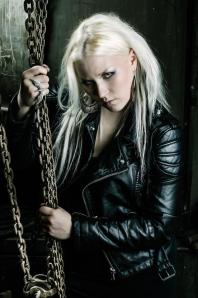 It is a well-known fact that all Finnish women are pretty and charming, absolutely no doubt about that. But it’s when a girl from the land of ice and snow releases her inner beast that things get even more exciting, which is exactly the case with our Metal Chick of the Month, the ravishing Noora Louhimo, lead singer of Finnish Heavy Metal band Battle Beast. And if you don’t like the voice and the looks of this blonde “warrior princess”, honestly, I don’t know what to say.

Noora was born on November 6, 1988 in Tampere, Finland, around 180km north of the capital Helsinki, and she has been singing since she was only 4 years old. She had many hobbies before she started focusing on singing, such as dancing, acting, drawing, painting and anything else she could do to express herself. When she was around 13 years old, she had her first band at school, singing Finnish pop songs as well as love ballads from artists like Whitney Houston and Celine Dion.

Despite being a huge fan of Heavy Metal from the 80’s when she was a teenager, when she was 16 years old she had some classical singing lessons, before starting to study music in a more Pop/Jazz-line and doing some jam sessions at bars at the age of 19. That was also when she found her first band, called Admiral Octopus, at a place called BluesBar. The band used to play Rock N’ Roll and Blues from the 60’s, 70’s, and also songs from Janis Joplin, which according to Noora herself is the reason why she got the rasp in her voice. After Admiral Octopus, Noora took part in a singing competition called “Wanna Be A Rock N’ Roll Star” at a place called Henry’s Pub, also in Tampere, and guess what? She won the competition singing Janis Joplin’s classic Piece of My Heart. That’s how her single Relax was born, and that’s pretty much her history before joining Battle Beast.

It was during autumn in 2012, right after Battle Beast finished touring some summer rock festivals in Finland, that singer Nitte Valo, who was with the band since its inception in 2008, announced to be leaving the band due to family issues. In September 2012, guitarist Anton Kabanen found Noora by accident on YouTube when he was searching for a new vocalist for Battle Beast, and after a couple of calls Noora accepted the challenge to be the new frontwoman of the band. In 2013 our blonde diva recorded her first full-length release with the band, the powerful self-titled album Battle Beast, and more recently the also amazing Unholy Saviour, in January 2015.

The Finnish lioness mentioned in one of her interviews that she does many different exercises with her voice, rest it when needed and then a lot more, and also that working out is a very important part of keeping her vocals in a good shape. Whatever she’s actually doing with her voice, it’s working more than perfectly, as we can notice in her excellent performance on a Finnish television program in 2014 singing the song Into the Heart of Danger, her contributions to the good song Satans of Swing by Finnish band Somehow Jo! and to the inspiring Eye to Eye by Swiss Melodic Power Metal band Crystal Ball, and also singing one of her favorite songs from Battle Beast, the electrifying tune Let It Roar. One interesting fact about her singing style is that, as much as she wants to sound like a female singer with “balls”, she wants to sound feminine and sexy at the same time.

In regards to her main influences in life, our warrior princess doesn’t only sing Heavy Metal, but a huge variety of music genres such as Soul, Rock, Blues, among others, and those different styles are what keep her in balance and inspired as a singer. As aforementioned, she started listening to metal music when she was 16 years old, and that “fire” started actually with Guns N’ Roses. When she heard Welcome to the Jungle for the first time, she knew there was no coming back. Then there came Dio, Judas Priest, W.A.S.P. and of course Iron Maiden. Although her list of influences is endless, including names such as Robert Plant, Freddie Mercury, Ronnie James Dio, Whitney Houston, Blackie Lawless, Rob Halford, Bruce Dickinson, Michael Jackson, Axl Rose and many more, her biggest idols in music are first Janis Joplin and second Ann Wilson.

And last but not least, when asked if she’s addicted to any bad habit or guilty pleasure, her answer couldn’t be more feminine than that: chocolate. Well, our “blonde ninja” is an extremely talented and beautiful woman, and Finnish chocolate is by far one of the best in the world. I guess there couldn’t be a better combination than that to celebrate two years of The Headbanging Moose, right?

“My passion has always been music and different ways of expressing myself as an artist.” – Noora Louhimo

Battle Beast want the world and everything in it, and they’re definitely on their way to conquer it all with their brilliant brand new album. 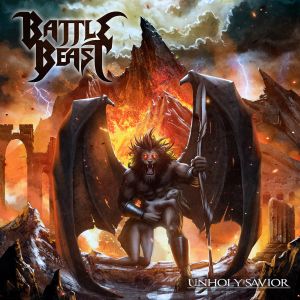 If what Finnish Heavy Metal warriors Battle Beast wanted with their 2013 album, the self-titled masterpiece Battle Beast (which was left out of our 2013 top 10 list by a huge and inexcusable mistake), and their brand new album, the mighty Unholy Savior, was conquering the world of heavy music, I must say they are on the right path to reach their goal. Their third full-length album sounds even more professional and polished, always with that magic aura from the 80’s supporting their musicality.

Just like its predecessor, Unholy Savior is an endless feast of heavy riffs, catchy melodies and straightforward Heavy Metal boosted by the inspired performances from all band members, led by guitarist Anton Kabanen and especially the stunning bombshell Noora Louhimo, the “Janis Joplin of Heavy Metal”. Honestly, I cannot think of a band that’s been playing such captivating heavy music nowadays, and things get even more exciting as Battle Beast have the whole package, from their music to their looks. In other words, what else do you need in a Heavy Metal band that those “unholy saviors” from Finland are not offering us?

Unholy Savior has a very simple rule: hitting “play” and banging your fuckin’ head until the end, which becomes obvious from the very first notes in the opening track, Lionheart. This “fight song” focuses on a solid and traditional instrumental with a strong Stratovarius vibe, with Noora’s amazing voice and its inspiring lyrics (especially its chorus) making it one of the best of all songs without a shadow of a doubt. The title-track, Unholy Savior, has that 80’s intro similar to what was done in some songs from their previous album, with its drumming by Pyry Vikki and keyboards by Janne Björkroth dictating the rhythm. Moreover, pay good attention to its backing vocals as they add a lot of electricity to the chorus.

The following track, I Want The World… And Everything In It, is beyond spectacular and the best of the whole album, with its powerful riffs and solos working flawlessly. Besides, it’s quite impossible not to raise your fists and scream the chorus with Noora, whose potent voice perfectly flows through the song’s harsher lines. But before you listen to it again and again, take a listen to the rest of the album starting by the next song, the Power Metal tune Madness, certainly one of the best choices for their live performances with highlights to the nonstop Pyry on drums and, once again, to the gorgeous Noora. As she screams during the song, her name is madness! 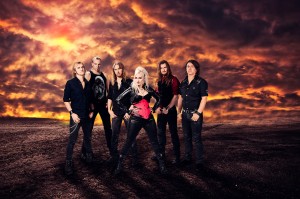 In order to slow things down a little and let us recover our energy, the band provides us a beautiful “medieval” ballad entitled Sea Of Dreams which focuses 100% on Noora’s voice, and let me tell you her performance and the song lyrics will surely warm up our hearts during the coldest nights of winter so pleasant this song is. After that short break, it’s time to break our necks again with Speed And Danger: with a name like that I don’t need to say it’s as fast and heavy as it can be, right? I would love to get into some circle pits while the band plays this song, with highlights to its great lyrics paying a tribute to several of the band’s Heavy Metal idols.

Touch In The Night, with its 80’s keyboard notes and its lyrics talking about love and passion (“I’m gonna feel the wrath of the king / ‘Cause touching you was a sin / I’m a victim of my own desire”), might not be a bad track, but it gets so pop sometimes (including Noora’s vocals) to the point it’s annoying. The next two tracks are a bit “weird”, but that doesn’t mean they’re not good at all: The Black Swordsman is a nice and short ballad that works as a bridge to Hero’s Quest, an instrumental track tailored for playing video game or drinking beer with your friends, with its guitars and keyboards in total sync.

The last part of this awesome album begins with Far Far Away, a very consistent song about the journey of each and every Heavy Metal fan in the world, with its riffs inspired by classics such as Judas Priest and Iron Maiden, especially by the unique riff from “Two Minutes to Midnight”; followed by the touching ballad Angel Cry, with kudos to Noora for another outstanding performance. To be fair, if anyone still thinks our Metal diva shouldn’t have become the frontwoman of Battle Beast, this song will easily prove why she was indeed the chosen one. And finally, as a more-than-welcome bonus track, we have Push It To The Limit, a Metal version for Paul Engemann’s classic from the 1983’s masterpiece Scarface that will put you to dance.

In short, while Battle Beast keep roaring and spreading their thrilling heavy music all around the world with albums like Battle Beast and now the incredible Unholy Savior, we can rest assured Heavy Metal will stand strong and relevant for many years to come. Those Finnish metallers are getting closer and closer to dominating the entire world of music, and when they finally do so I’m sure everyone will just love it. Who doesn’t want to be ruled by a screaming queen like Noora, right? All hail to Battle Beast!

Best moments of the album: Lionheart, I Want The World… And Everything In It, Sea Of Dreams, Far Far Away and Angel Cry.

Worst moments of the album: Touch In The Night.