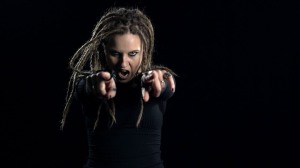 Label me insane… My madness is not my enemy!

Get ready to be absolutely stunned by the sick growling, screaming and roaring blasted by our metal lady of the month of September, a true metalhead who loves all types of extreme music from the bottom of her Latvian heart, with her music being highly recommended for diehard fans of renowned acts like Aborted, Cryptopsy, Cattle Decapitation, Decapitated, Bloodbath and Hideous Divinity, among several others, who are always in pursuit of new names in the scene and who also love a feminine touch amidst such level of devastation. Hailing from Riga, Latvia’s capital, set on the Baltic Sea at the mouth of the River Daugava, but currently residing in the metal heaven known as the Federal Republic of Germany, here comes the ferocious she-wolf Māra Lisenko, the indomitable growler for some of the best bands of the past few years coming from the Baltics, those being Ocularis Infernum and MĀRA.

Having studied vocals at Vocaltech – Thames Valley University (currently known as University of West London) in 2007 in the UK, as well as with some of the most prestigious vocal coaches worldwide such as rock and metal vocal coach Melissa Cross, rockstar vocal coach Mark Baxter, and “Death Metal Phoniatrician” Dr. Enrico H Di Lorenzo (Hideous Divinity), Māra is an extremely versatile vocalist, being able to sing from the most brutal and gory growls to fragile, emotional clean vocals. In addition, although she started to sing in bands and tour around Europe in 2003, her singing career started way earlier than that, when she was still a three-year old girl, mainly because her own mother was a choir leader and inspired her to follow a similar path. A self-starter and an autodidact, our dauntless growler is also a vocal coach, having taught several aggressive as well as melodic vocal techniques and training since 2011, and also offering studio session work for bands who need professional sounding vocals for their recordings (and you can get more details about her services by clicking HERE or HERE). In one of her interviews, she said all the energy in her singing and screaming is driven by her real-life experiences and emotions, never about fictional topics, which in her opinion makes it a lot easier for her to transform those feelings into ass-kicking vocals.

During hear early years as a professional vocalist, she was part of two distinct Latvian bands named Defame (which I couldn’t find any information online) and Karmafree, with whom she won a couple of awards, those being Best Vocalist in a band contest named “Rīgas Dzintars” with Karmafree in 2011, and a Grand Prix with Defame at Sinepes Un Medus in 2005. Karmafree, which is still active by the way, is an alternative bass and vocal duo comprised of Māra on vocals and her husband Dmitry Lisenko on bass formed in 2010 in London, England, playing many festivals and releasing a self-titled demo and video entitled Fresh Millionaire before the duo returned to their homeland Latvia. In 2012 they released their first EP, named Illusions, along with a music video for the song Fragile; after their debut album, Karmafree released a series of singles, with songs like Invisible,  Validate Me and #SSDD beautifully representing the evolution of the project, their social and political fights, and of course Māra’s fantastic vocal range. You can listen to a lot more of the music by Karmafree on their official YouTube channel, as well as on their BandCamp page.

It was back in 2015 when Māra was able to present herself to a much broader audience after joining a Riga-based Melodic/Symphonic Death/Black Metal band named Ocularis Infernum, who have been on the road since 2002 but who had released only one demo and one EP before she became their frontwoman. Under the stage name of Māra Sekhmet, she released in 2017 together with the band’s founders Andris and Magnuss the excellent Expired Utopia (which you can purchase from their own BandCamp page or listen in full on Spotify), exploring themes like darkness, occultism and paganism, always embraced by a symphonic and Stygian aura inspired by renowned acts such as Dimmu Borgir and Cradle Of Filth. I personally loved listening to every single second of Expired Utopia, and if you’re also a fan of this fusion of extreme and symphonic music you can have a taste of the band’s darkness and of Māra’s refined gnarls and powerful clean vocals by listening to the songs A Confession Of Defeat and Lost Forest. There’s nothing on the band’s official Facebook page about an upcoming album, concerts nor anything like that since the end of 2018, but let’s hope they’re just taking a break and that the world can enjoy more of the music by Ocularis Infernum in a not-so-distant future.

Right now, Māra’s main project is her own solo band named MĀRA, a Latvian/German four-piece outfit established in 2018 that plays a modern and sharp amalgamation of Death, Thrash, Alternative and Groove Metal. Currently based in two countries – Germany and Latvia – MĀRA have already played tours and summer festivals all across Europe since their inception, visiting countries like Italy, Belgium, Switzerland, United Kingdom, Germany, France and obviously Latvia, and opening for some of the biggest exponents of Extreme Metal such as Sepultura, Krisiun and Satyricon. So far Māra and her henchmen, including her aforementioned husband Dmitry on bass, released in 2018 their debut EP entitled Therapy For An Empath, which you can purchase from their BandCamp page or listen to in full on YouTube, and three music videos for the songs Sell Your Soul, Label Me Insane and Blameshifter, having already won Album Of The Year (with Therapy For An Empath, of course) and Best Vocalist at the  Latvian Metal Music Awards 2018. Moreover, you can enjoy MĀRA’s incendiary performance at the Latvian Metal Music Awards 2018,  which was held at an underground extreme music club in Riga named Melnā Piektdiena, playing the song Label Me Insane live during the event. As you might have already noticed, the name of the band was taken directly from her own name Māra, a very traditional Latvian girl name and, according to Māra herself, in Latvian folklore it’s also the name of a goddess, carrying a lot of strength rooted very deep in where the band comes from, also using Māra’s cross as their logo, a powerful Latvian magic sign.

Regarding her main idols in music, you just need to think of most classic Death, Thrash, Black and Groove Metal bands like Sepultura, Morbid Angel, Slayer, Carcass, Aborted, Cryptopsy and so on, with Max Cavalera (Sepultura, Soulfly, Cavalera Conspiracy) being perhaps her biggest idol as a vocalist. Māra even mentioned during an interview that one of her dreams as a musician would be to sing either Territory or Roots Bloody Roots together with Max as a very distinct and powerful duet, showing her total admiration and respect for a man that has undoubtedly revolutionized the way extreme vocalists sing all over the world. Not only that, you can also check all her passion for extreme music and vocalists on her official YouTube channel, where she uploads her own vocal covers for some of the heaviest and most awesome songs of all time, as for example Slipknot’s Psychosocial and The Heretic Anthem, Lamb Of God’s Laid To Rest and Sepultura’s Territory, with Slipknot having a huge influence on her vocal style and taste for music according to Māra herself, in special their 2001 masterpiece Iowa. As a matter of fact, she released her cover version for The Herectic Anthem on the same day Slipkont launched their brand new album We Are Not Your Kind this year, proving how much she loves and follows the band led by Corey Taylor. On a side note, our skillful vocalist also said that all metalheads from Latvia who dedicate a lot of their time to keep the local metal scene going, doing it just for their love for metal with basically no financial reward, also inspire her a lot in life, once again showing Māra has and will always have a beautiful connection with her homeland.

Māra also seems to be crazy four touring and performing live, as she mentioned in an interview that she could simply live out of touring. She enjoys visiting different countries, meeting and playing for different people, and learning about metal scenes everywhere she goes. She has already played in several European countries, and I’m pretty sure she can’t wait to expand her horizons to places like North and South America, Japan and Australia. As aforementioned, Māra and her husband Dmitry are currently residing in Germany (while the other band members, guitarist Denis Melnik and drummer Alberts Mednis, still live in Riga), and the reason why they decided to do that was purely due to music. She said that while metal in Latvia is considered underground and the opportunities for metal bands and artists there are very limited (albeit the internet can be very helpful in terms of worldwide exposure), even taking into account the metal scene in Latvia is healthy and friendly, Germany is the place to be for any type of metal band, complementing by saying that the fact her band is located in two different countries ended up helping them book gigs in more than one country. In addition to that, she said there are no metal radio stations in Latvia, and there are only 4 or 5 metal-oriented pubs in the entire country where local and touring bands can play. Well, let’s say that Māra is one of the most hardworking metal musicians (if not the most) hailing from Latvia that’s trying to change that, putting her beloved homeland on the global metal map even living in Germany.

Last but not least, when asked if she also sings and writes in her mother tongue Latvian and in any other language rather than English, she said although English is her preferred language because she wants her lyrics and messages to be understood by as many people as possible, she also sings and writes lyrics in Latvian and Russian depending on the project she’s working on, as sometimes she feels she wants to communicate only with Latvian and Russian speaking people. In case you want to enjoy about one hour of Māra talking about her career, her goals, her personal life and many other topics in English, I highly recommend you take a shot at an interview she gave to Dani Zed Extreme Music Reviews & Liveshows via Skype a couple of months ago. How lucky is Dani Zed for having the utmost pleasure of talking to such nice and talented metal woman for an extended period of time like that? We need to thank him for uploading the interview on YouTube, and obviously keep supporting Māra on her quest for extreme music in Lativa, in Germany, and anywhere else in the world where powerful and visceral female roars like hers are truly appreciated.

“I love touring, I could live like that. I love visiting different countries, meeting and playing for different people, learning about metal scenes everywhere I go. It’s very exciting.” – Māra Lisenko