Behold the debut opus by a Canadian Black Metal horde that takes inspiration from the surging oceans and mist-strewn coast as they explore themes of futility, passage, and individual and metaphysical transformation.

As the skies turn grey and dense fogs hang above the shoreline, Canadian Black Metal unity Liminal Shroud will expel a swirl of melancholia and torment over its moss-strewn forests and perilous waves in their debut full-length album, titled Through the False Narrows. Formed in late 2017 in Victoria, British Columbia, the three-piece band comprised of Aidan Crossley on vocals and guitar, Rich Taylor on bass and vocals, and Drew Davidson on drums takes inspiration from the surging oceans and mist-strewn coast as they explore themes of futility, passage, and individual and metaphysical transformation in their new opus, being highly recommended for fans of the music by Ash Borer, Drudkh and Fen. Recorded by Jordan Koop at The Noise Floor Recording Studio, mixed by the band’s own Aidan Crossley, mastered by Rolando Rolas at Cavern of Echoes Studios, and featuring a striking artwork by Canadian artist Alayna Coral Gretton, Through the False Narrows offers the listener a unique form of Black Metal surging with atmosphere and anguish, melancholy and rage, showcasing Liminal Shroud’s own sound and style without sounding repetitive or tiresome at all.

A demented growl from the pits of the underworld ignite the sluggish, dark and infernal Blackened Doom-infused aria A Hollow Visage, with Aidan barking and roaring like an anguished beast supported by the intricate drumming by Drew, and with the music changing its shape and form throughout its imposing 11 minutes while presenting the band’s Black Metal core from start to finish. Then more of their fusion of progressiveness and obscurity comes in the form of Tainted Soil, with Aidan and Rich crafting a Stygian ambience with their respective riffs and bass lines while Drew and Rich are in absolute sync, darkening our minds and thoughts to the sound of their evil kitchen; followed by To Forget, presenting cryptic, acid lyrics vociferated by Aidan (“A life not lead lies obscured / Beyond broken branches / Amidst the shallow, desperate forest floor / What secrets have you buried?”) while the music remains bold and epic in a hybrid of classic Black Metal with Atmospheric Black Metal. Needless to say, this amazing tune will please all fans of the genre without a shadow of a doubt. 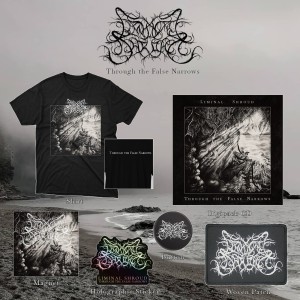 Investing in a more melodic, melancholic and grim sonority, the trio offers our avid ears a majestic wall of sounds in The Grotto, where the strident riffage by Aidan matches perfectly with his own austere gnarls, ending in a truly enfolding manner before we’re treated to four minutes of old school Black Metal infused with Atmospheric and Epic Black Metal nuances in Erupting Light, where Drew is unstoppable behind his drums showcasing all his dexterity and passion for extreme music. Never tired of blasting their disturbing but extremely sharp and harmonious Black Metal, those Canadian metallers bring forward the multi-layered Sentinel, where Aidan keeps roaring deeply and demonically while Drew and Rich alternate between sheer obscurity and demolishing sounds, and before all is said and done get ready for an 11-minute feast of Atmospheric Black Metal in Lucidity, presenting their darkly pensive lyrics (“Dragged down by weighty night / Hollow, weary eyes – fixated / The world moves faster / Time is a wheel / Every second / Every hour”) and with Aidan being on fire with his strident riffs, accompanied by the smashing beats by Drew and the Marduk-inspired bass jabs by Rich, therefore putting a beyond splendid and venomous conclusion to Through the False Narrows.

Do you think you have what it takes to enter the realm of atmospheric and tormented Black Metal ruled by Liminal Shroud in their brand new album Through the False Narrows? If your answer is a hellish “yes” with an evil grim on your face, you can enjoy the album in its entirety on YouTube and on Spotify, but of course if I were you I would definitely purchase such distinguished opus of extreme music from the band’s own BandCamp page, from the Hypnotic Dirge Records’ BandCamp page or webstore (where by the way you can find this amazing bundle including a CD, a shirt, a woven patch, a magnet, a metallic button and a sticker), from Season of Mist or from Amazon. In addition, don’t forget to follow the band on Facebook and on Instagram for news, tour dates and other nice-to-know details about such talented horde, keeping the fires of their tormenting extreme music burning bright for centuries to come in their homeland and anywhere else in the world where Black Metal is truly appreciated.

Best moments of the album: To Forget and Lucidity.