Exploring the definition of nihilism as a philosophy and a way of life, this ruthless Portuguese horde will darken your mind with the Blackened Death Metal found in their sophomore opus.

Forged in the fires of Paços de Ferreira, a city in the Porto District in the north of Portugal, in 2012, Nihility are a four-piece Blackened Death Metal band heavily influenced by the roots of Death and Black Metal, exploring the definition of nihilism as a philosophy and a way of life, passing through the many different ways of nihilism, how it’s understood and adjusts to everyday life and society as a whole. Following their 2019 debut opus Thus Spoke The Antichrist, the band comprised of Mário Ferreira on vocals, Renato Barbosa on the guitars, Miguel Seewald on bass and Luís Moreira on drums has just released their sophomore effort, entitled Beyond Human Concepts, a top-notch album that hopefully will catapult these Portuguese youngsters into the forefront of the European Death Metal scene. Produced, mixed and mastered by Pedro Mendes at Ultrasound Studios Braga, and displaying a Stygian artwork by Credo Quia Absurdum, Beyond Human Concepts is an album of sheer brutality that will please fans of bands the likes of Behemoth, Vader, Morbid Angel, Decapitated and Vomitory, among others, representing an infernal step forward in the band’s career.

Renato ignites the band’s devilish machine with his riffage in the opening tune Martydom for the Herd, being gradually accompanied by Miguel’s bass and Luís’ drums in an infernal display of Black and Death Metal. And Mário continues to vociferate like a demonic entity in Hubris, with Luís crushing his drums in great fashion. Put differently, it’s a fulminating fusion of Blackened Death Metal with D-Beat Crust elements, whereas Destroy the Shackles of Prejudice is even more devastating than its predecessors, with Renato being on fire with his wicked riffs supported by the kitchen from hell by Miguel and Luís, not to mention how evil Mário sounds once again on vocals. Then after such high level of destruction get ready for two and a half minutes of insanity in the form of extreme music in Human Stupidity, a song that’s absolutely perfect for slamming into the pit while Mário vomits the song’s putrid words.

Conflicting Vanities is ideal for banging your head like a true metal maniac thanks to the visceral beats by Luís in another brutal display of Blackened Death Metal by the quartet that lives up to the legacy of the genre, and there’s no time to breathe as those Portuguese metallers keep delivering sheer dementia and obscurity in Will to Power, with Luís stealing the spotlight with his venomous drums. The Religious Dogma is another demented explosion of Blackened Death Metal made in Portugal where Mário roars and barks rabidly, accompanied by the slashing and rumbling sounds blasted by the band’s stringed duo, whereas the title-track Beyond Human Concepts brings to our avid ears an extreme music extravaganza where all band members showcase their dexterity and passion for heavy music, keeping the album blazing brightly. And last but not least, it’s time for Sea of Thoughts, a sinister outro that puts a proper end to the album (albeit not as vile as the other songs). 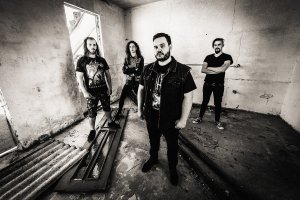 You can enjoy such devilish album in its entirety on YouTube and on Spotify, follow Nihility on Facebook and on Instagram for news, tour dates and other nice-to-know details about the band, and above all that, grab your copy of Beyond Human Concepts from the band’s own BandCamp page, and from the Vicious Instinct Records’ BandCamp page or webstore (or click HERE for all locations where you can buy or stream the album). In other words, go numb and let your mind go black, let your soul be engulfed and captured by the void, then let this be the vessel for all your pent-up aggression and rage, for this is Nihility and this is the void.

Best moments of the album: Destroy the Shackles of Prejudice, Human Stupidity and The Religious Dogma.

Worst moments of the album: Sea of Thoughts.

A progressive, technical and “psychedethic” album by a Canadian band that has all it takes to dominate the world of Death Metal.

Have you ever heard of the expression “psychedethic” in your life? That’s how Canadian Progressive/Technical Death Metal band Antlion refers to their music, a powerful combination of the wrath found in Death Metal with an unbounded burst of groove and progressiveness. Based on what their debut full-length album The Prescient has to offer, I must agree this new term created by the band should be added to the dictionary, and as soon as you hit play you’ll have the perfect explanation to that in the form of high-quality Canadian metal.

Although the band was formed in 2012 in the city of Ottawa, Canada, it’s just now in 2015 that they’re releasing their first material, which for me at least indicates they might be extremely rigorous with the quality of their compositions, right? Anyway, featuring a more-than-psychedelic album art by Chris Volion (The Gilley van Weirden Workshop), The Prescient has all it takes to get deep into your mind and make you feel completely dazed, so exquisite the album is. And especially if you’re a musician, pay good attention to the details those guys offer within each and every song, and you might have encountered a new favorite band for your collection.

What seems like it’s going to be just relaxing progressive music in the opening track, Incubation, suddenly turns into a wild feast of Progressive Death Metal for fans of Tool and Mastodon, with guitarists Shane Williams and Joe Kruger giving a lesson in creativity with their strings. In the amazing Hubris, imagination and complexity keep walking hand in hand, with drummer Arend Nijhuis stealing the spotlight with his breaks and double bass, sounding as if Dream Theater and Cannibal Corpse merged into one band. And Cycle of Failure presents Jazz elements in a crazy journey guided by Shane and Joe, as if there were three or four songs in one due to its progressiveness.

The next tune, named Hive, flirts with Melodic Deah Metal by providing the listener awesome guttural vocals and flowing electricity. It’s definitely one of the best tracks of the album due to its excellent riffs and rhythm, not to mention its violent ending, before A Seer’s Elegy showcases another display of heaviness and creativity by the band, with Adam kicking ass on both vocals and bass. I would say this song has all the “attributes” of a serial killer, being violent but extremely methodical and/or surgical at the same time.

Spire offers an awesome blend of Groove and Progressive Metal (it can’t get any crazier than this!), with its background effects enhancing the song’s oddity and, once again, Arend providing the listener incredible beats and breaks. And as a final treat for us metalheads, Antlion bring forth an insane two-piece title-track, with the first part, The Prescient (Part I), delivering madness, beautiful riffs and lots of variations, being heavier than most tracks of the album mainly due to its resonant bass lines; and the second part,The Prescient (Part II), concluding the album in a solid and progressive way, again including hints of Jazz to provide extra layers of intricacy to it.

All this metallic lunacy can be found at their official Facebook page and YouTube channel, and you can find The Prescient for sale at the band’s BandCamp page. If you’re not only a connoisseur of Death Metal, but also a fan of visionary metal bands, I must say The Prescient might have a significant impact on your headbanging life, as it’s indeed an important breakthrough in this “psychedethic” band’s path to conquer the world of extreme music.

Best moments of the album: Hubris and Hive.