This imposing Swedish metal band is ready to hypnotize us all with their breathtaking debut concept album.

Formed in 2017 in the city of Linköping, Sweden, Symphonic Metal act Emetropia is set to release their debut album, entitled Equinox, bringing the full Equinox Saga which was teased in their 2018 debut EP Procession of the Kings, with all EP tracks also being “re-imagined” and re-recorded. While many bands in the genre choose to lean towards a gothic, dark theme, Emetropia instead focus on delivering energetic and dynamic metal driven by big orchestras and choirs carefully brought forth by Lisa Wallenberg on vocals, Olle Renius and Jonatan Jakobsson on the guitars, Kristoffer “Bobo” Pynnönen on bass, Liam Strand on keyboards and orchestrations, and Oscar Heikkinen on drums. Mixed and mastered by Michele “Meek” Guaitoli and displaying a stunning artwork by Jani Stefanović, Equinox “is a story about a small boy who finds himself captivated by a story told by the fireplace at night. In this tale, the kings of Summer and Winter rage a never-ending battle for the throne. Saddened by the fact that they are trapped in a cycle of bloodshed and suffering, the boy sets out to convince the Fey King and Frost King to make peace. However, while the Great Wheel turns, can it ever stop spinning?”, as explained by the band’s vocalist and lyricist Lisa.

Liam kicks some ass from the very first second with his striking keys in the re-imagined version of Seasonal Warfare, while Olle and Jonathan begin their guitar duel in great fashion in a classic Symphonic Metal feast for admirers of the genre. Then in the also re-imagined version of A Summer Breeze, Oscar dictates the song’s epic pace with his thunderous beats supported by the rumbling bass by Kristoffer and the magical orchestrations by Liam, not to mention how powerful and hypnotizing Lisa’s operatic vocals sound; and this six-piece squad keeps embellishing the airwaves with their unique Symphonic Metal in That Fateful Night, with all backing vocals enhancing the song’s impact and epicness considerably while Lisa beautifully tells the story proposed. In the re-imagined version of Lord of the Blizzards we’re treated to the angelic vocals by Lisa in paradox with harsh growls, turning the song into a metal opera  with the rhythmic drums by Oscar and the riffage by Olle and Jonatan guiding us on Emetropia’s musical voyage; whereas the stunning piano notes by Liam kick off the whimsical The First Leaf Falls, absolutely epic and bringing to our ears over six minutes of classic Symphonic Metal with a cinematic approach.

The visceral riffs by the band’s guitar duo set fire to the music in Fall’s First Storm, offering us all an electrifying wall of sounds spearheaded by the crushing drums by Oscar while providing Lisa with all she needs to shine on vocals, and it’s time for a classic Melodic Metal tune with symphonic nuances entitled The Old Gods, as if Stratovarius and Nightwish had a child together, and with Liam and Oscar once again stealing the spotlight with their respective instruments. The re-imagined version of Procession of the Kings is another Nightwish-inspired tune by those Swedish rockers that will put you to dance while you enjoy Lisa’s mesmerizing vocal performance, resulting in a top-of-the-line composition flawlessly brought forth in the name of metal music. Finally, prepare your senses as an 11-minute voyage through the realms of Symphonic Metal is about to begin in His Final Endeavour, full of breaks and variations and feeling like the score to an epic movie blending the band’s core essence with Heavy and Power Metal elements. Furthermore, Olle and Jonatan are bestial with their guitars, all of course spiced up by the stunning vocals by Lisa until the song’s smooth and climatic finale. 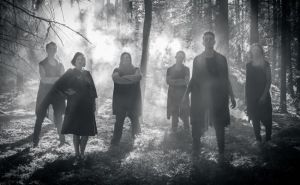 The talented musicians from Emetropia are waiting for your feedback on their music on Facebook and on Instagram, and don’t forget to also subscribe to their official YouTube channel and to stream all of their creations on Spotify. “Equinox represents everything about Emetropia. After half a decade of songwriting and developing as musicians, we’ve finally completed an album that sounds just like we envisioned it. There will be straight forward power metal, there will be mind-boggling progressive metal, and there will be bombastic symphonic metal over the course of its 53 minute run time! In the end, Equinox provides listeners with nine diverse and unique songs, all displaying the different sides of Emetropia to look forward to. We can’t wait to finally unveil the complete Equinox Saga,” commented Liam about the band’s new opus, which will be available for purchase from their BandCamp page, and I’m sure you’ll be beyond thrilled to join Emetropia in their quest for Symphonic Metal to the awesome music found in Equinox.

Best moments of the album: Fall’s First Storm, Procession of the Kings and His Final Endeavour.

Worst moments of the album: That Fateful Night.