A gargantuan collision between the heaviest of Death Metal and the darkest of emotions, submerged in an unsettling atmosphere of grief and isolation, masterfully crafted by a ruthless Belfast-based quartet. 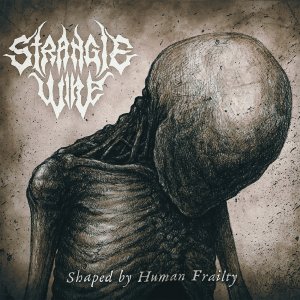 A gargantuan collision between the heaviest of Death Metal and the darkest of emotions, submerged in an unsettling atmosphere of grief and isolation, Shaped By Human Frailty, the first full-length album by Belfast, Northern Ireland-based horde Strangle Wire, is a demonstration of Death Metal at its most effective and affecting, with sheer power being shaped by superb song writing following up on their 2018 EP The Dark Triad. Branding themselves as “Psychological Death Metal”, the band currently formed of Pete on vocals, Ross on the guitar, Daff on bass and John on drums delivers fast, groove laden and devastatingly heavy Death Metal throughout the entire album with the assistance of Chris Fielding (Electric Wizard, Primordial, Napalm Death) at Foel Studios, being therefore tailored for fans of Bolt Thrower, Asphyx, Grave and Benediction.

Arising from the pits of the underworld, the band kicks things off with a demented Death Metal attack entitled Heavily Medicated, where the vocals by Pete sound inhumane, also showcasing an amazing stringed work by Ross and Daff while John decimates our souls with his crushing drums. Pete roars deeply in the also pulverizing Learned Wretchedness, bringing forward old school Death Metal for lovers of the genre while again inviting us all to slam into the circle pit like demented metalmaniacs, with Ross extracting sheer obscurity from his riffs and solos. Are you tired already? Because there’s more of the band’s demolishing Death Metal in Judas Switch, an ass-kicking, infernal creation bringing to our avid ears more of the putrid guttural by Pete and the hammering drums by John, and get ready to be smashed by Strangle Wire in the demonic The Human Tensile Experiment, where the sensational blast beats by John offer Pete exactly what he needs to bark like a rabid beast, not to mention how heavy and visceral the guitars and bass by Ross and Daff sound.

Take a deep breath to the sound of the melancholic instrumental interlude An Abhorrent Intervention before all hell breaks loose in the title-track Shaped by Human Frailty, offering us all old school, in-your-face Death Metal with no shenanigans, being vile and aggressive from start to finish spearheaded by the intricate and demonic beats by John. Dead Before the Still brings forward less than three minutes of pulverizing groove and heaviness by the quartet, with the bass by Daff making our heads tremble in an ode to classic Death Metal; whereas their second to last blast of insanity and darkness, titled Psychology of the Sick, is a lesson in violence inspiring us all to headbang like there’s no tomorrow. And there’s nothing better than ending an album of crushing Death Metal with another crushing song, named Horrors Beneath, where Pete roars in great fashion supported by the stunning instrumental by his bandmates.

If you would like to explore the vicious, psychological world of Strangle Wire, you can do so by following the band on Facebook and on Instagram for news and tour dates, by subscribing to their YouTube channel, by streaming their music on Spotify, and by purchasing Shaped By Human Frailty from their own BandCamp page or from Apple Music sooner than you can say “Death Metal”, or simply click HERE for all things Strangle Wire. Absolutely dark and sinister, Shaped By Human Frailty provides us with the exact message that the band wanted to send when they started working on the album, with its cruel atmosphere proving that once you’re captured by the Death Metal brought into being by Strangle Wire, there’s no escape.

Best moments of the album: Heavily Medicated, The Human Tensile Experiment and Horrors Beneath.

Enjoy this short and sweet lesson in Death Metal made in Northern Ireland, taking you into the dark heart of the human condition.

Behind the locked doors that lie in the shadows, at the end of forgotten passageways, in the depths of every human mind, madness waits, scratching at the splintered wood with bleeding fingers. However, sometimes those locks fail, or the keys are purposefully turned, unleashing the monsters from within. The Dark Triad, the brand new EP by Northern Irish Death Metal quartet Strangle Wire, is the sound of the monsters set free, the sound of broken minds and twisted personalities, and the sound of an insidious assault on the light that keeps the night at bay.

Formed in 2017 in Belfast, Northern Ireland’s capital, the band comprised of I (Pete Clarke) on vocals, II (Greg “Daff” Diffin) on bass, III (Ross Duffy) on the guitar, and IV (John Curlett) on drums plays what can be called “Psychological Death Metal”, being highly recommended for fans of Dying Fetus, Cannibal Corpse and Sinister, among several other Death Metal icons. Featuring a classic artwork by British musician and designer Tom Bradfield, The Dark Triad is divided into three sections, entitled Narcissism, Psychopathy and Machiavellianism, taking the listener into the dark heart of the human condition, propelling them ever onward with a musical force of savage intensity, Death Metal possessed of speed, groove and supreme heaviness.

III (or Ross, if you prefer) kicks off the Death Metal hurricane titled The Games They Play with his metallic riffs before pure anarchy and devastation take over the world, with I (Pete) firing his deep, enraged and bestial growls nonstop. Put differently, this is one of those songs tailored for fans of extreme music who simply love to slam into the pit more than they love anything else in life. Then tribal sounds start another heavier-than-hell, putrid Death Metal feast named The Narcissist, a slow and steady tune from the pits of hell led by the rhythmic beats by IV (John), while II (Greg) and III keep slashing our skin with their demonic strings. Then we have Psychopathic Blue, showcasing guitar lines that remind me of the work done by Thrash Metal acts like Slayer and Testament, but still being pulverizing and demonic as good old Death Metal should be. The quartet is on fire and in total sync throughout the entire song, delivering belligerent and rabid sounds for our total delight, with I’s hellish roars getting even deeper and more primeval. 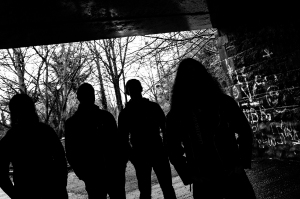 And their metallic demolition goes on with more furious blast beats, infernal vociferations and crushing riffs in The Failure Exhibit, where the band practically demands that we all get into the circle pit and slam to the total havoc they generate by their instruments; whereas if you’re a diehard fan of old school Death Metal the likes of Cannibal Corpse you’ll have a blast with Through a Black Lens, where IV sounds like a machine gun on drums while I is a demonic bulldozer on vocals. Furthermore, there isn’t a single second of peace during the entire song, it’s nonstop action boosted by the excellent riffage by III and a beyond violent atmosphere. And last but not least, as the final onrush of extreme music by Strangle Wire we’re treated to a headbanging, menacing chant titled Den of Iniquity, sounding insanely heavy from the very first second until its neck-breaking end, while I keeps barking like a creature from a deep and dark cave.

The Dark Triad, which is available for purchase from the Grindscene Records’ webstore, from Code 7, or from Amazon, is not only a very promising and vibrant start for Strangle Wire, but also a “mini-lesson” in how to properly unite technique, feeling and rage in Death Metal and in extreme music in general. And if that’s just a mini-lesson as I said, can you imagine how pulverizing Strangle Wire will sound when they come back with their first full-length lecture?

Best moments of the album: The Games They Play and Through a Black Lens.