A journey through the past, present and future in the career of the unstoppable Blaze Bayley in the form of first-class Heavy Metal for his diehard fans in Toronto. 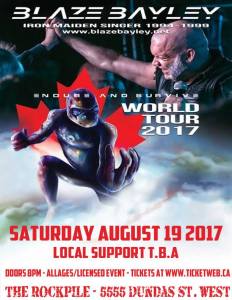 I’ll never understand why people who call themselves diehard metalheads would miss a chance to attend a top-notch Heavy Metal concert like what we had this Saturday at the really nice venue The Rockpile, which despite being usually referred as located in Toronto, technically speaking it’s in Etobicoke, an administrative district and former city that makes up the western part of the city of Toronto, around 18km from downtown. The weather was perfect, the beer was nice and cold, the food was great and all prices were very, very reasonable (including the ticket price). And those so-called fans of heavy music keep complaining on Facebook, Twitter etc. that metal doesn’t have the proper support and all those shenanigans. How about instead of just typing, you get up from that couch, head to a place like The Rockpile and support underground metal?

If you do that, perhaps you’ll face an electrifying band like the young and restless thrashers from CADILLAC BLOOD, a completely independent act from Keswick, Ontario, located 70km north of Toronto. Blending elements from Thrash Metal, Punk Rock and Rock N’ Roll in their music, and being clearly inspired by bands such as Volbeat (by the way, the band’s name comes from Volbeat’s classic album Guitar Gangsters & Cadillac Blood if you haven’t noticed yet), Metallica, Motörhead and Anthrax, the quartet comprised of Luke Morrell on vocals, Tyler Morrell on guitar, Sean Murphy on bass and Dean Fraser on drums delivered an excellent warmup to the fans that were there for Blaze Bayley, being extremely professional and excited from start to finish, in special Luke who didn’t stop jumping and headbanging for a single second while singing at the same time. Unfortunately I don’t have their full setlist, but you can go to their BandCamp page and check out songs like Crow’s Nest and Devil’s Brew, both played by the band on Saturday. 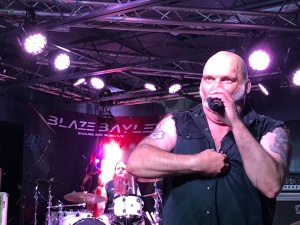 When it was time for the unstoppable BLAZE BAYLEY to hit the stage with his Endure and Survive World Tour 2017, at around 10:30pm, The Rockpile was not even half full, maybe due to lack of better promotion or because the pub was a bit far for fans who rely on public transportation to move around, but I think those are just excuses for our society’s growing laziness to do anything that’s not online. Blaze deserved a much bigger crowd (he even joked it was his fault, as he asked that only true metalheads attended his concert), as he’s been doing superior music being totally independent, with very little support from anyone but himself and his bandmates. His music is powerful and vibrant, his lyrics are poetic and meaningful, and his energy on stage is simply fantastic. What else do you need in a metal concert?

Anyway, the brave fans who were at The Rockpile had the absolute pleasure of witnessing an amazing performance by Blaze and his amazing band formed by the talented Chris Appleton on guitars and backing vocals, Karl Schramm on bass and backing vocals, and Martin McNee on drums, who are not only the guys who recorded the first two parts of the kick-ass Infinite Entanglement trilogy with Blaze, the 2016 album Infinite Entanglement and the 2017 follow-up Endure And Survive (Infinite Entanglement Part II), but who are also three quarters of British Heavy Metal act Absolva, a great underground band highly recommended for lovers of old school metal music. 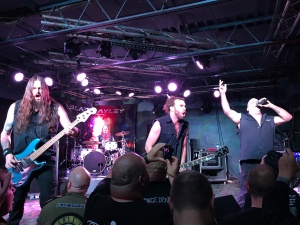 When Blaze was in Toronto for the last time, at the now defunct Hard Rock Café in 2014, he was supported by a Canadian Iron Maiden cover group named Maiden Quebec, and although they were a very good band, Blaze’s performance was somewhat hampered by their lack of chemistry. Fortunately for the fans at The Rockpile this Saturday, Blaze and the guys from Absolva were in perfect sync, a reflection of their years working together, delivering to the crowd a top-notch setlist encompassing the best of Blaze’s past, present, and even future (if you think of Infinite Entanglement as an evolving project), playing simply the best songs from Wolfsbane, Iron Maiden and his unparalleled solo career. From the very first notes of the inspiring Endure and Survive, to the speed and violence of Blood, Dark Energy 256 and Man on the Edge (see his intro video to this all-time classic HERE), and the epicness of The Clansman, their performance was flawless.

As I mentioned before, Blaze is a metal poet, and there was always a reason for a song to be inserted in his setlist, always bringing a powerful message to the fans who were singing along all lyrics with Blaze. For instance, his speech about how we all fail and how we all must stand up from our failures and fight our fears again and again in Fight Back, from his latest album, only shows how much he loves what he does and how much he’s passionate about Heavy Metal, as well as how he said us fans are his “home” in the emotional Calling You Home. Of course there was also room for lighter topics, like when he explained the origins of Wolfsbane and how we all would feel “sexier” after screaming the words “man hunt” during Wolfsbane’s biggest hit Man Hunt. By the way, the “duel” between Blaze and the rest of the band during this song was awesome, with Chris and Karl stealing the show with their refined techniques. Blaze made sure he acknowledged the undeniable talent of Chris not only as a guitarist, but also as a songwriter and producer, something we can easily see through his work with both Absolva and Blaze Bayley. 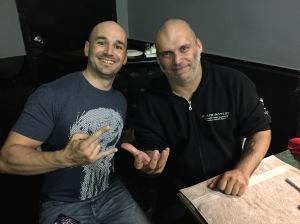 After the last song of the setlist, A Thousand Years (my favorite track from Infinite Entanglement), Blaze and the guys stayed at the venue for a free autograph and photo session with their fans, not charging a single penny as most band do nowadays with their “meet & greet experiences”, as a sign of his respect and admiration for us, supporters of independent music. All band members were very nice and courteous with everyone, talking about their tour across Canada and the US, their plans for the future and other topics. And all true metal fans who attended the concert on Saturday went back home with a huge smile on their faces, something that happens every single time you see a concert by the metal warrior Blaze Bayley. As simple as that.