Is it a tornado? Is it a tsunami? No, it’s motherfuckin’ OLD SCHOOL SLAYER NIGHT in Toronto!

Yesterday night was one of those things that will be forever in our minds, hearts, aching necks and torn muscles. I must admit I was really tired after a full day at work, and driving from Oakville to Toronto when it’s raining it’s not fun at all, but what happened at the Kool Haus last night was worth every minute spent in traffic downtown.

Before I start, I have to say something amazing I saw lat night, which was the huge number of parents with their small kids at the concert. There was this father with his son, who was pretty excited for the concert, so I asked him how old his boy was and he said “he’s 11 now”. That’s about when I started listening to Slayer! That made me sleep better this night (even with my neck killing me), knowing the future of mankind doesn’t look so bad while we still have headbanging kids like that.

The first band of the night was 4ARM, from Melbourne, which means we have another good Metal band from Australia now. It was a decent concert that I liked a lot, even though I knew nothing about their career. Quick question: why do over 50% of the metalheads today, including band members, look so much like Jesus Christ even when singing about Jesus being a lie is their favorite topic? Anyway, that was a good warm-up for the rest of the night and a good chance to enjoy some beers while listening to some fuckin’ heavy tunes.

Then came Gojira, or Godzilla in Japanese, which by the way was the original name of the band. If you like to bang your head non-stop like a mutherfucker, you must listen to this neck-breaking French band: they are far from being the fastest band in the world, but they’re as heavy as an obese elephant and perfect for having a beer and smashing your neck. I don’t know a lot about the band; however, songs like L’Enfant Sauvage and The Heaviest Matter of the Universe sounded excellent for live concerts. Merci beaucoup, Gojira, for such a nice performance!

And it was so funny between Gojira and Slayer, when the DJ was playing some AC/DC songs and some guys (including myself) started singing “Aaaaaaaa… SLAYER! Aaaaaaaa… SLAYER!”, instead of “thunder” in Thunderstruck. There are things that only Slayer fans can do. 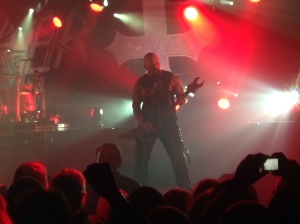 Whoever is responsible for the management of the venue can definitely change its name to “Kool Hell” or “Slaughter Haus” from now on. I think any Slayer concert should be used for human population control, especially if it’s an OLD SCHOOL SLAYER NIGHT like last night in Toronto. The mosh pits were insane; it was like Hell on Earth! In fact, the entire venue was a mosh pit.

Talking about the concert itself and the band, and I know it doesn’t matter what or how I say it here, I’ll never be able to describe in words the perfection of the show. I’ve seen Slayer live a lot of times (how the hell am I still alive?), and they’ve never disappointed me. Slayer always delivers a brutally awesome performance on stage, no matter where they are. When the intro to the classic Hell Awaits started and the white sheet that was covering the stage went down, there they were: Tom, Kerry, Gary and Paul, all ready for some fuckin’ Thrash Metal, and the fans answered the best way possible with a crazy mosh pit.

After that it was a sequence of old classics to make all diehard fans go crazy: the fast Antichrist and Necrophiliac, the cool Mandatory Suicide and Captor of Sin, and then we had the havoc anthem War Ensemble. There’s nothing I can say about this song except HOLY FUCKIN’ SHIT! And when I thought I could have a break and breathe for a few seconds, they come with an avalanche of classics including some of my all-time favorite Slayer songs such as At Dawn They Sleep, Die by the Sword and Spirit in Black. Do you want to rest now? No, you don’t, because the next song is Seasons in the Abyss, which was sung out loud by all fans at the venue in a celebration of Thrash Metal. 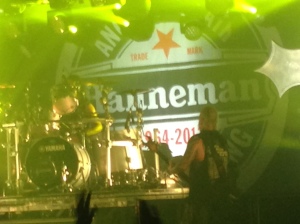 Although we all love Jeff Hanneman (RIP) and respect that amazing punk attitude he brought to Slayer, we have to admit Gary Holt is a beast and a perfect fit for Slayer. I don’t want him to leave/end Exodus, no way, but the Thrash Metal riff master adds so much value to Slayer that it’s impossible to think of anyone else that could replace him now. And as a tribute to one of the most underrated guitar masters of all time, Kerry and Tom decided to add the magnificent Strike of the Beast to their entire tour. Holy shit, that was brutal and unforgettable! And just when things didn’t seem they could get more awesome, Slayer provides us another annihilating sequence with Dead Skin Mask (also sung by everybody there), one of the most violent songs in the world and one of my favorites Raining Blood, and the fuckin’ old school Black Magic. Was it the end (of the world)? No, there was still time for the encore, the famous one with the Heineken/Jeff Hanneman flag on the back with the obscure South of Heaven and my top Thrash Metal track of all, the slashing anthem Angel of Death. Although in my opinion Dave Lombardo shouldn’t have left Slayer, I feel really good with the monster Paul Bostaph on drums, and what he did in Angel of Death just confirmed my feelings.

Finally, it’s always a pleasure to see Tom Araya and Kerry King playing live. The first is always so serene and enjoys so much having a good time with the fans (he even  demanded the security guys to bring back one fan that was supposedly doing something wrong and was about to be expelled), while the other is an unstoppable shredding machine with his pretty evil guitar.

I swear I tried hard to find a Metallica T-shirt, but there was none. The Kool Haus in Toronto was a huge SLAYER NATION (the T-shirt I got yesterday!) last night, with no room for pussies. Well, there were many girls there, but they were not pussies at all (although they do have one): they were slamming in the pit with no mercy of the poor (or lucky?) guys close to them. Next time someone tells me Metallica is heavier than Slayer, I’m going to slap that stupid idiot in the face.

I didn’t see a single person that was just “OK” when that Armageddon came to an end. Quite the contrary, everybody was exhausted, sweating like a pig, but with an immense smile on their faces. I unfortunately hit a guy’s nose with the back of my head, and it might have hurt a lot on him (I feel so sorry for that guy). I also got a kind of a bruised eye, but nothing compared to a guy with a full black eye I saw when the show was over. My neck and the rest of the body hurt like if I was smashed by a steamroller, but hey, that’s FUCKIN’ SLAYER! No ballads, no acoustic shit, just pure fuckin’ Heavy Metal. Was it raining in Toronto when the show was over? Yes, but who cares? Inside the venue it was RAINING BLOOD, and I can’t wait to see my Thrash Metal heroes live again.