Immerse yourself into the 40 minutes of Orthodox Black Metal split into seven obscure arias carefully crafted by an up-and-coming horde from the Hellenic Republic. 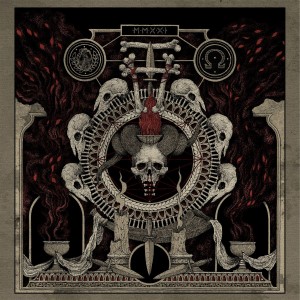 If you’re an admirer of the darkest side of extreme music it’s time for you to enjoy some Orthodox Black Metal made in Greece in the vein of Misotheist and Ascension, courtesy of an occult and mystic entity known as Svartulven armed with their debut opus entitled Ruins of Desolation, Transcendence for the Other Side. Mixed by Nikos Trialonis at Goblin’s Lair Studios in Greece, mastered by V.Santura at Woodshed Studio in Germany, and displaying a cryptic cover artwork by Adrian Baxter, the album brings forward 40 minutes of ass-kicking Black Metal split into seven obscure arias carefully crafted by this up-and-coming horde from the Hellenic Republic.

Arising from the depths of the underworld, this uncanny band comes ripping with their phantasmagorical sounds in Witness of Fire Beyond, with its venomous roars and strident riffs penetrating deep inside your psyche in a great display of sulfurous Black Metal, whereas Svartulven in Twilight begins in full force with its pounding drums hammering our cranial skulls mercilessly, also displaying an amazing fusion of visceral screams with some background vocalizations and, therefore, being highly recommended for fans of a more progressive and diverse style of Black Metal. And continuing their path of devastation, obscurity and evil, Svartulven deliver the straightforward extravaganza Therianthropic Metamorphosis, again presenting classic blast beats, Stygian guitars, low-tuned bass lines, and a crushing sense of despair that permeates the air until the very last second.

The Parable of Abel offers us all five minutes of sheer darkness in the form of old school Black Metal, or in other words, it’s another amazing example of what the band is capable of doing, with the song’s razor-edged riffs generating a pulverizing paradox with its groovy bass jabs. Back to a more classic sound, Herald of Eternal Damnation presents a mid-tempo start spearheaded by their always harsh vociferations that explodes into an avalanche of brutality and violence, resulting in a lecture in Black Metal by such talented Hellenic outfit. Their second to last onrush of extreme music comes in the form of Feast for the Black Earth, again showcasing a heavier-than-hell kitchen, a sinister atmosphere and sharp riffs for our total delight, before the band crushes us one last time with The Crystal Scythe of the Old, a beyond caustic composition where its wicked vocals and a disturbing ambience will haunt our damned souls until all fades into the unknown.

The gates to the Hellenic underworld are open thanks to Svartulven and their Ruins of Desolation, Transcendence for the Other Side, and in order to join them in their quest for extreme music you can start following the band on Facebook and on Instagram, and soon purchase a copy of their austere new album from Dark Terror Temple’s BandCamp page or webstore, proving you’re a true servant of darkness. Although the names of the musicians that are part of such distinguished horde are unknown, in the end that’s just a minor detail taking into account the high quality of the music found in their debut effort, and they can keep their identities as secret as they want as long as they keep delivering more of their incendiary Black Metal for many years to come.

Best moments of the album: Svartulven in Twilight and Herald of Eternal Damnation.