One of the most traditional and respected Power Metal titans from Germany return with another good album, although not as memorable or inspired as it could have been.

As a tribute to the newly crowned World Cup champions Germany, who won the final match yesterday against Argentina, a team that truly put their hearts and souls into the match and deserve our most pure respect for almost beating an unbeatable machine such as the Teutonic squad, here’s the review for the new album by one of the most influential German bands of all time. I remember back in the 90’s when German Power Metal icons Grave Digger redefined their style to a more epic and powerful musicality, releasing some high-end classic albums such as Heart of Darkness (1995), Excalibur (1999), and especially the masterpiece Tunes of War (1996), increasing their legion of fans significantly, reaching a main-eventer status and headlining important tours and festivals worldwide. That was exactly when I became a huge fan of their unique Power Metal, and until today I feel really excited whenever Chris Boltendahl and his clan announce that a new Grave Digger album is about to rock the world.

Unfortunately, this time I’m a little sad to say that their new album, Return of the Reaper, is not as good as I was expecting. Despite having some very traditional and powerful moments with those characteristic elements we learned to love in the music by Grave Digger, most songs of the album sound way too generic and uninspired. They seem to be suffering from the same “sickness” as Arch Enemy with their latest release: the album is far from being a disaster, but we all know they’re capable of delivering something a lot more creative and thrilling than that. Where are those Heavy Metal anthems such as “The Grave Dancer”, “Rebellion (The Clans Are Marching)” or “Excalibur”?

However, there’s no need to panic: Return of the Reaper might not be a memorable album, but it is quite enjoyable and sufficient enough to keep Grave Digger relevant in the world of heavy music. The intro Return Of The Reaper, which is a heavy version of Frederic Chopin’s Funeral March enhanced by some desperate screams, followed by the most traditional Grave Digger musicality you can find in this album (and by far the best song of all), the violent Hell Funeral, are together an excellent way to kick things off with lots of  Power Metal riffs, a catchy chorus and Chris Boltendahl’s voice sounding as awesome as usual even after so many years on the road. War God is another fast tune most fans will enjoy, with Stefan Arnold always precise on drums, but the chorus could have been a little more powerful and less repetitive (which by the way is a constant during the rest of the album); while Tattooed Rider has a name that simply asked for a more Hard Rock sonority, and albeit being a good song it’s kind of generic, especially in regards to the lyrics. 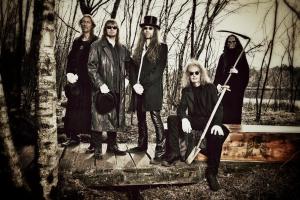 Then we have two of the worst tracks of the album: Resurrection Day, despite some good riffs and drumming, has horrible lyrics that don’t mean anything and a really bad chorus; while Season Of The Witch sounds like a rip-off of “The Last Supper” (especially the riff), getting really tiring after a while. At least the following track, the boisterous Road Rage Killer, speed things up with its really awesome heavy riffs, sounding similar to some of their old classics and, consequently, becoming one of the top moments of the album.

The following tracks will probably create mixed feelings among all fans of the band, alternating really good moments with lots of cheesiness and lack of creativity. Although Grave Desecrator offers us a good mix of Hard Rock and Power Metal, its horrible lyrics hamper it from becoming an excellent song; on the other hand, Satan’s Host is another good song with a very traditional approach and direct lyrics, and I’m pretty sure it will be one of the chosen songs by the band to be played live due to its intensity. Dia De Los Muertos slows things down a little with its simple but effective 80’s Hard Rock, even with its “creative” Spanish name that doesn’t add anything to the song (“Day Of The Dead” would have been a much better choice); while Death Smiles At All Of Us has an interesting keyboard intro that turns into a nice Power Metal tune, complemented by the best guitar solo of the whole album. And finally, for a band with so many outstanding ballads such as “Dolphin’s Cry”, “The Ballad Of Mary (Queen Of Scots)” and “Emerald Eyes”, closing the album we have the boring Nothing To Believe, which sounds truly uninspired and too generic compared to what Grave Digger are capable of doing.

At least the album art, once again created by Gyula Havancsák of Hjules Illustration and Design, who has been responsible for all of the band’s artworks since The Last Supper (2005), lives up to Grave Digger’s name, even if it’s not as majestic as The Last Supper or Heart of Darkness. In conclusion, if you’re a long-time fan of Grave Digger you can go ahead and buy their new album, you’re probably going to enjoy it. But if you are not fond of their most recent releases, Return of the Reaper will just be another reason for you to keep complaining about what the band is currently doing and keep going back to their old classics for some truly inspired Power Metal music.

Worst moments of the album: Resurrection Day, Season Of The Witch and Nothing To Believe.