Bringing to our ears and hearts first-class music inspired by the golden years of Heavy Metal, the most electrified metal squad from Finland are ready to storm the world once again with their brand new kick-ass classy album. 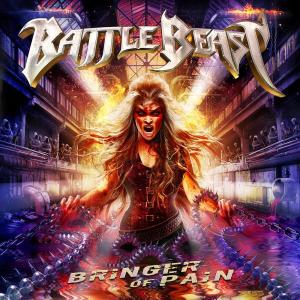 After listening to Bringer Of Pain, the fourth full-length album by Finnish metallers Battle Beast, there are two immediate conclusion that come to my mind. First, that the motto “100 % Heavy Metal – 0 % Bullshit!” couldn’t be more precise to describe the electrified Heavy and Power Metal compositions by this Helsinki-based squad. And second, the entire album feels like it was recorded back in the 80’s or 90’s due to its sensational old school aura, but only released now in 2017. And perhaps paying a tribute to the golden years of heavy music was the original goal of the band with Bringer Of Pain, starting with its impactful name. “The title is more than just a catchy punchline,” bassist Eero Sipilä explains. “’Bring the pain’ as a phrase means ‘giving your best’, stepping up against the odds, something that really sums up the spirit of this band and this album. The fact that the name also brought to mind a certain Judas Priest album definitely didn’t hurt either.”

The album’s classic album art, crafted by the specialist of realistic fantasy art Jan Yrlund (Darkgrove), is the perfect depiction of what Battle Beast have to offer their fans this time. “The cover art is mainly involved with the title track of the album, “Bringer of Pain”, which is obviously about this super evil female character destroying stuff. We brainstormed a little around this topic and then sent some sketches to Jan, who returned with the picture, some mean-looking woman who appears like she’s coming through the box art to kick your ass. And since ‘kicking ass’ is pretty much exactly what this band is about, we considered it a very fitting cover.” In addition to that, the main change from their previous album, the flammable Unholy Savior, is the departure of guitarist and main songwriter Anton Kabanen, but that doesn’t mean the band couldn’t maintain their signature sound alive, with newcomer Joona Björkroth fitting perfectly to everything Battle Beast stands for.

The first track of this rousing album, Straight to the Heart, brings to the listener pure upbeat Heavy Metal from the 80’s with the electrified keyboards by Janne Björkroth and the flawless vocals by the fiery metal goddess Noora Louhimo turning it into an instant classic. Put differently, it’s that type of metal music that will put you to dance right away while you scream its chorus from the top of your lungs together with Noora. Albeit the name of the album and its cover art bring the unbeatable Painkiller to our minds, the title-track Bringer of Pain actually reminds me of another high-octane classic by the almighty Judas Priest, “Freewheel Burning”, which obviously means it’s beyond awesome. Furthermore, the frantic performances by Pyry Vikki on drums and both Juuso Soinio and Joona with their blazing guitar riffs and solos, together with the song’s epic background vibe, turn it into the best of all tracks in my humble opinion. Whereas the first single of the album, King for a Day, unites classic Heavy Metal with old school Hard Rock, feeling at times like a modern metallic version of Survivor’s hit “Eye of the Tiger” with another blast of the sensational keyboards by Janne, not to mention its catchy chorus, which will certainly stick inside your mind for a long time (“King for a day / He kills the truth and looks away / King for a day / Lives like the world would end today / King for a day / What do you hide, why do you lie? / Who made the rules for this game? / Who is paying your champagne? / All the mercy in the world / Cannot save you anymore / King for a day”). 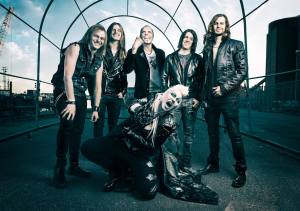 In Beyond the Burning Skies, Battle Beast deliver a beautiful and inspiring musicality, with Noora stealing the spotlight with her powerful and precise vocal lines while the rest of the band maintains a high level of energy flowing from their instruments. Needless to say, listening to this classy chant will make your day better for sure. Then we have Familiar Hell, a song about our inexplicable fear of change and how change can actually bring happiness and joy to our lives, with Janne and bassist Eero Sipilä keeping the adrenaline running from start to finish (if this song had been written in the 80’s, it would have definitely been a top-chart hit); followed by Lost in Wars, a mid-tempo composition showcasing an epic atmosphere with Noora and guest vocalist Tomi Joutsen sounding like the beauty and the beast, boosted by the song’s heavy riffs and thunderous keyboards. And Bastard Son of Odin might have the cheesiest song name, lyrics and rhythm of all, but that ends up working really well as Battle Beast are masters in crafting this type of music. In a nutshell, their “Viking mode” sounds absolutely great, especially the raspy screams by Noora and the galloping bass and drums à la Iron Maiden by Eero and Pyry, respectively.

We Will Fight, an potent Power Metal hymn tailored for singing along with the band while holding your fists in the air, is another mid-tempo tune that enhances Noora’s vocals through its mystical aura and steady beats, while Dancing with the Beast is a very good surprise amidst so many heavy tunes. The first time I saw the song’s name, I honestly thought it would be more ferocious like any song with the word “beast” in it. However, it’s a smooth 80’s Hard Rock ballad with very gentle instrumental pieces, with the sexy voice by Noora leading its pleasant sonority. On the other hand, Far from Heaven is just a below average song that’s way too mellow, sounding like a lame ballad from any of those generic “top 40” artists, which obviously means it’s the worst of all songs hands down. It’s well-played and very melodic indeed, but it lacks punch and electricity. anyway, if you go for the digipack edition of Bringer Of Pain (which can be purchased HERE), you’ll be treated to three amazing bonus tracks, all displaying the band’s trademark high-voltage Power Metal, with Rock Trash being by far the most awesome of them. This is a superb metal hymn that should have been part of the regular version of the album, perhaps its closing tune instead of that boring ballad.

We can never get tired of the indomitable Battle Beast, right? That’s why the band is always willing to share more of their music and their lives with us, which in the case of Bringer Of Pain comes in the form of three entertaining official track-by-track videos from the band that can be seen HERE, HERE and HERE. And Valentine’s Day might be dead and gone this year, but I’m sure if you give your significant other the “Bringer Of Pain special bundle” (for guys or for girls), his or her love for you will only grow stronger than metal. Or you can go to the official Nuclear Blast webstore and choose your favorite option from several versions available. Battle Beast are more than ready to storm the world once again with Bringer Of Pain, bringing to our ears and hearts another shot of their first-class heavy music, and we should be more than thankful for that, as well as for the band not giving us any sign at all of slowing down or giving up metal. Quite the contrary, it seems that their battle will rage on for many years to come.

Best moments of the album: Straight to the Heart, Bringer of Pain, Beyond the Burning Skies, Bastard Son of Odin and Rock Trash.

Worst moments of the album: Far from Heaven.