In the hostile lands of Borsu, witness the passage of a soldier through various levels of consciousness about the reality of war, human society and the fabric of the cosmos itself, all embraced by the fury and epicness of Melodic Death and Black Metal. 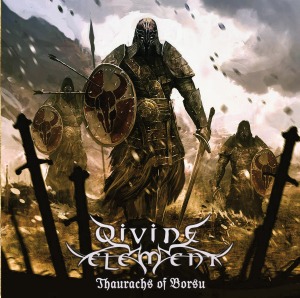 A comeback that has been slowly brewing since a few years now. Formed in 2002 in the city of Athens, Greece, Melodic Death/Black Metal act Divine Element was the first band of Spectral Lore’s multi-instrumentalist Ayloss and vocalist Antonis, releasing their self-titled debut album back in 2010. After a hiatus of almost seven years, Divine Element are finally back with the stunning Thaurachs of Borsu, the first chapter in many future ones to come under a new and ambitious conceptual undertaking, the combination of metal with fantasy literature and world-making. Featuring a classy artwork by Chilean artist Matias Trabold Rehren, Thaurachs of Borsu is based on the same-titled novel written by Ayloss, which will be unveiled not long after the album release (to be followed by short stories from Antonis), set on a medieval fantasy universe envisioned by the band.

Thaurachs of Borsu chronicles the passage of a soldier through various levels of consciousness about the reality of war, human society and the fabric of the cosmos itself, as the gritty and daring warriors of his nation, Borsu, fight to regain their ancestral homeland from a much more powerful enemy. Musically speaking, the album ties together several styles of metal to serve the higher purpose of epic storytelling, albeit taking notice to never fall into the typical clichés of “soundtrack metal”, keeping an old-school approach mostly centered around Death and Black Metal of the heavy, melodic variety. Put differently, after hitting play you’ll find yourself wandering through the lands of Borsu, ready for battle and eager for some blood, banging your head nonstop to the majestic heavy music played by Antonis and Ayloss, with the precise and masterful support of German drummer Hannes Grossman (Alkaloid, Hannes Grossman, Shapeshift) to make their sound even more enthralling.

A Realignment With Destiny is a fantastic epic intro to the battle that’s about to come, the title-track Thaurachs Of Borsu, where Antonis and Ayloss begin their crushing onslaught in total sync with the Amon Amarth-inspired beats by Hannes. In other words, this is superb metal music, dense and profound, with all instruments filling all spaces with sheer aggression and might. In addition, how not to fall in love for those monumental lyrics (“The valley folk to the mountains’ slopes withdrew / Surrounded only by unwrought stone / The sea lords to the dry desert driven / Οswan roams frenzied in a soundless plain / Mestyr hangs discouraged with a rusting blade / And all hearts bellow in a silent wailing / A resignation to oblivion”)? 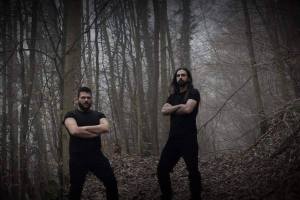 In Onto The Trail Of Betrayal, Antonis’ potent deep growls keep rumbling the earth while the instrumental pieces invest in a more Black Metal sonority. Moreover, the intricate beats by Hannes go along flawlessly with the cutting riffs by Ayloss, resulting in eight minutes of the best underground Melodic Death and Black Metal you can get anywhere, where they not only play superior music but the story being told is also a work-of-art. Then in Beyond This Sea we’re treated to a calm and melancholic start before the sound of the sea and the guitar lines blend in a beautiful manner, creating a potent atmosphere for the metallic sounds that are about to come. Adding elements of Blackened Doom and Folk Metal to their menacing Melodic Death Metal, the result couldn’t sound more imposing and appealing, with highlights to how vocals and guitar follow the exact same lines.

The movie-inspired bridge Interlude (The Point Of No Return) sounds even more majestic than the album’s intro, warming up your fighting soul for the crushing Call Of The Blade, a gripping fusion of the music played by Amon Amarth with traditional Folk Metal, with Antonis sounding like a beast on vocals, enhancing the impact of the song’s already powerful lyrics (“The land speaks to me in an alien tongue / Though my blood was born in these shores / What will I find, if I dig to unearth these roots / The echo of old thoughts faints quickly here / As the collective energy rises triumphant / Powered by the fiery will of a few”). Traitor’s Last Stand is another belligerent tune by Divine Element, showcasing almost eight minutes of heavier-than-hell riffs, electrifying passages and enlivening breaks. Furthermore, Hannes brings a high dosage of intricacy to the overall musicality with his drumming, while Antonis keeps telling the story with precision and passion through his anger-fueled growls. The last part of the song exhales epicness, gradually morphing into the cinematic outro Augury For A Shapeless Future, where the gorgeous sound of a rough ocean, together with the orchestrations in the background, make it the perfect climatic ending for the album.

No words can describe with the right amount of detail how amazing Thaurachs Of Borsu is, which is why I highly recommend you go take a listen at the album in its entirety HERE, and also visit the band’s official Facebook page for more information and their YouTube channel for more awesomeness in the form of heavy music. Also, there are several locations where you can purchase Thaurachs Of Borsu, such as Divine Element’s BandCamp, the I, Voidhanger Records’ BandCamp or webstore, and the Season of Mist’s webstore, as well as on Amazon and at Discogs. And while we wait for the next chapter in the career of Divine Element, we have plenty to enjoy and absorb in this superb album where heavy music and a thrilling story-telling couldn’t be more connected, impactful and vibrant.

Best moments of the album: Thaurachs Of Borsu, Beyond This Sea and Call Of The Blade.

Released in 2017 I, Voidhanger Records