Blending elements from progressive and symphonic music with the most obscure side of Extreme Metal, all enfolded by majestic orchestrations, here come Rise of Avernus with their heaviest and darkest opus thus far. 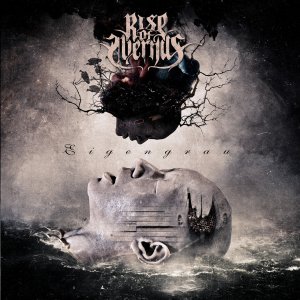 Since their inception in 2011, Australian Dark Orchestral Death/Doom Metal horde Rise of Avernus has been making a name for themselves throughout the metal community with their unique style blending elements from progressive and symphonic music with the darkest side of Extreme Metal, all enfolded by majestic orchestrations. Within the short time since the release of their 2012 debut EP, they’ve followed a relentless touring schedule, supporting some major international acts such as Apocalyptica, Enslaved, Eluveitie, Prong, Septicflesh, Fleshgod Apocalypse, Rotting Christ and Sigh along the way. Now in 2018 it’s time for this Sydney-based blackened squad to spread their devilish wings all over the world once again with Eigengrau, their fourth studio release and, more important than that, their heaviest and darkest opus thus far.

Featuring a Stygian artwork by world renowned artist Seth Siro Anton (aka Spiros Antoniou from Septicflesh), Eigengrau is the experience of seeing a deep grey shade in the total absence of visible light, or what one may refer to as a “perfect darkness.” Upon this canvas, an individual can project their subconscious, their processes, their anxieties and their fears. Thematically, Eigengrau explores the fluidic nature of these self-created experiences, how they can be shaped and how they may change at the point of one’s own death. Other tracks go on to explore the intricacies of personal realities, influenced by external factors or via spiritual and religious indoctrination. The nature of self-realization and being forced to confront weakness to overcome it. The distinct sound of the album reflects these altered states, oscillating between delicate movements and nightmarish grandiosity.

And Rise of Avernus’ nightmare of tenebrous and imposing sounds begin in full force in the opening track Terminus, showcasing a movie-inspired start before becoming a majestic fusion of the extreme music by bands like Cradle of Filth, Dimmu Borgir, Behemoth and Necronomicon with a raw Death Metal twist. Furthermore, Ben VanVollenhoven, the (black) heart and soul of the band, sounds insanely infernal on vocals, as well as Andrew Craig and his thunderous drums. Following such fantastic beginning we have Ad Infinitum (or “to infinity”), a neck-breaking, symphonic tune led by the atmospheric keys by Mares Refalaeda where Ben once again brings sheer darkness to the musicality with his demonic voice, resulting in a flawless combination of Atmospheric and Symphonic Black Metal. 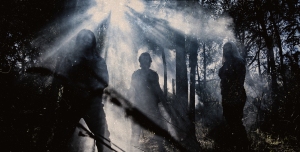 Then we have a movie score-inspired beginning to yet another venomous feast by Rise of Avernus titled Gehenna, showcasing a beautiful but still obscure mid-tempo rhythm led by the guitars by Ben, who also provides a powerful performance with both his harsh and clean vocals (not to mention how awesome all orchestrations are); while Eigenlicht offers the listener almost eight minutes of a descent into the pitch black crypts of Hades, presenting smooth guitar lines by Ben and the always gripping keys by Mares, with the atmospheric break halfway through it being a thing of beauty. To sum up, this is Symphonic Black Metal at its finest, with the whole music ending in dense and ferocious fashion for our total delectation. And there’s’ still a lot more to go in Eigengrau, with tribal beats igniting another sonic extravaganza named Tempest, where Ben sounds more hellish and cavernous than before while Andrew and Mares fill all empty spaces with their burning instruments, resulting in a flawless mix of orchestral and heavy music.

Forged in Eidolon brings forward an ominous intro rising from the pits of hell directly into your mind, with the spectral orchestrations and keyboards by both Ben and Mares imprisoning your soul in the metallic realm of evil reigned by Rise of Avernus. Then serene sounds are joined by a wave of sublime orchestrations in Mimicry, creating the perfect ambience for the demonic growls by Ben and enhanced by the astounding keys by Mares. And as the closing act to this impressive album we have Into Aetherium, a wondrous composition that starts with almost three minutes of an instrumental blast of melancholic and obscure Symphonic Black Metal before all hell breaks loose, darkening our thoughts and hearts during its eight minutes of duration. Led by the bestial drums by Andrew, this fiendish hymn sets the perfect landscape for Ben to continue his path to the underworld, gnarling like an evil entity until the song’s mesmerizing and grandiose ending.

What are you waiting for to show your support for Rise of Avernus and purchase your copy of Eigengrau, one of the best extreme albums you can find out there, blending the aggressiveness of Death, Doom and Black Metal with the finesse and epicness of orchestral music? Eigengrau is available through Rise of Avernus’ own BandCamp page or Big Cartel (where by the way you can also find an album + patch + shirt bundle and an album + patch + pin + shirt + canvas/artwork bundle), as well as through the Aural Music webstore as a regular CD format or as a very special woodbox edition, if all of those versions of the album are still in stock, of course (which I doubt due to the insanely high quality of the music in question). Also, don’t forget to pay a visit to Rise of Avernus on Facebook for news, tour dates and other nice-to-know details about the band, and to listen to more of their classy music on YouTube. This is not only the band’s boldest, darkest and heaviest release to date, as aforementioned, but a lesson in extreme music that will certainly figure among the best metal albums of 2018 not only at The Headbanging Moose, but in several other publications all over the world where dark music always prevails.

Best moments of the album: Terminus, Eigenlicht, Tempest and Into Aetherium.