Steeped in the mythology and mysticism of ancient Egypt and Mesopotamia while exploring forgotten paths of history, here comes an infernal duo armed with their brand new opus of crushing Blackened Death Metal. 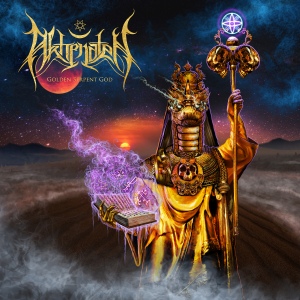 Forged in 2012 in the fires of Manitou Springs, a resort city in Colorado, in the United States by the “Houseman Brothers” Wyatt Houseman on vocals and Jerred Houseman on all other instruments, here comes a unique and vibrant Black/Death Metal studio project infused with Middle Eastern Folk Influences (even called “Blackened Mesopotamian Folk/Death Metal”) known as Akhenaten with their brand new album Golden Serpent God, steeped in the mythology and mysticism of ancient Egypt and Mesopotamia while exploring forgotten paths of history, extracting unknown lore and threads of truth. For instance, Akhenaten, known before the fifth year of his reign as Amenhotep IV, was a pharaoh of Egypt especially noted for abandoning traditional Egyptian polytheism and introducing worship centered on the Aten, giving you a very good idea of how distinct and aggressive the music by the duo sounds.

With parallel themes to what’s found in the brother’s Symphonic Black Metal band Helleborus, and featuring an imposing cover artwork by Tony Koehl of Sketch The Soul and a title page artwork by Dennis Lee Hughes of Cythraul Art, Golden Serpent God will appeal to fans of the music by bands such as Al-Namrood, Narjahanam, Melechesh and Kartikeya just like what happened in their previous release Incantations Through the Gates of Irkalla, from 2015, whispering to the most remote regions of primal memory to the sound of their Blackened Death Metal, filled with exotic instruments and rhythmic structures of the ancient Near and Middle East. “The album is a mural of epics from Egypt and Mesopotamia. It tells stories of belief, warfare, men and Gods,” said Jerred about their newborn opus, inviting the listener to an idiosyncratic and extreme music journey together with the duo.

In the excellent opening track, titled Amulets of Smoke and Fire, ominous sounds take us to the Mesopotamian world of Akhenaten, with Jerred generating a dark and embracing atmosphere with his scorching riffs, whimsical keyboards and demonic beats, while Wyatt growls like an Egyptian beast; followed by the also imposing and devastating Dragon of the Primordial Sea, where the guitar and bass lines create a beautiful paradox with the epicness flowing from keyboards, while Wyatt declaims the song’s lyrics with his deep, visceral growls, enhancing the song’s taste and impact even more, creating an instant link with the crushing chant Throne of Shamash, where the drums by Jerred get more and more demolishing as the music progresses in an excellent display of classic Blackened Death Metal, feeling like a battle hymn due to its thunderous vibe.

Then Middle-Eastern and folk elements permeate the air in the captivating instrumental bridge Through the Stargate, setting the stage for Akhenaten to smash our senses in Erishkigal: Kingdom of Death, a full-bodied, metallic feast of darkened sounds and nuances where the Houseman Bothers are absolutely on fire and in total sync, with highlights to the rumbling sounds extracted from guitars and bass. And things get even more thrilling as the strident and piercing sound of keyboards take the lead in the melodic aria titled Pazuzu: Harbinger of Darkness, the perfect union of history, myths and metal music, with the vociferations by Wyatt matching the musicality flawlessly, whereas in Akashic Field: Enter Arcana Catacombs get ready for over seven minutes of tribal beats and Middle-Eastern tones and nuances in another fresh instrumental extravaganza by this talented band, with Jerred blasting hypnotizing beats while the atmosphere remains as cryptic as it can be.

Featuring Brian Palmer (Circaic) on the guitar, God of Creation is the most devastating and modern composition by Akhenaten, with Wyatt growling like a demonic entity while Jerred makes sure the ambience remains as violent as possible in a multi-layered, intricate feast of Black and Death Metal for our avid ears. After such furious explosion of extreme music we have another interesting display of Middle-Eastern music infused with Extreme Metal and even futuristic elements entitled Sweat of the Sun, sounding a bit too weird at times (not to mention it could have been slightly shorter and more metallic), while in Apophis: The Serpent of Rebirth the duo gets back to their more incendiary mode, blasting a potent fusion of Progressive and Blackened Death Metal, being therefore tailored for fans of bands like Behemoth. Furthermore, the intricacy flowing from guitars and bass are the exact background Wyatt needs to thrive with his gnarls, flowing like a firestorm until the music fades into the atmospheric and vibrant outro Golden Serpent God, with all its hypnotizing sounds generating an enfolding and obscure finale for such heavy and captivating album.

In case you want to explore in more detail the vast and eccentric realm of Akhenaten, simply pay them a visit on Facebook for news and other nice-to-know details, and grab your copy of Golden Serpent God (available for a full listen on YouTube, on Spotify and on SoundCloud) from their BandCamp page, from the Satanath Records’ BandCamp page, from the Cimmerian Shade Recordings’ webstore, from iTunes, from Amazon or from Discogs. Akhenaten offer you a one-way ticket into the blackened and mysterious lands of ancient Egypt and Mesopotamia in Golden Serpent God, and I’m sure such distinguished experience will deeply encourage you to stay there and not come back of your own free will.

Best moments of the album: Dragon of the Primordial Sea, Pazuzu: Harbinger of Darkness and God of Creation.

Worst moments of the album: Sweat of the Sun.