Close your eyes and enjoy this Atmospheric Black Metal beast by a talented UK-based one-man army, bringing the beauty of vast and unspoiled landscapes and cold, cleansing winds to our hearts.

Wherever you may be in your life, the music by British Atmospheric Black Metal one-man band Arx Atrata can open a window onto that moment of hope and clarity you have always been searching for, bringing the beauty of vast and unspoiled landscapes and cold, cleansing winds to your heart, therefore being highly recommended for fans of the music by Winterfylleth, Ashbringer, Imperium Dekadenz and Agalloch, to name a few, or simply for those who still seek magic beneath the trees and under the stars. Formed in 2010 in Nottingham, a city in central England’s Midlands region, by vocalist and multi-instrumentalist Ben Sizer, Arx Atrata is offering to your avid ears and soul now in 2019 his third full-length opus, entitled The Path Untravelled, the follow-up to his debut album Oblivion, from 2013, and his sophomore installment Spiritus in Terra, from 2016, featuring a darkly stylish artwork by British artist Ellie Mowforth (Namurian Visions). With The Path Untravelled, Ben has unveiled even more of the qualities that have delighted fans and reviewers so far on his journey, digging deeper, reaching further and dreaming in even more vibrant colors to create something truly special.

The soothing sounds of nature and acoustic guitars invade our senses and grow in intensity in the instrumental intro MCMLXXVII until To Be Reborn comes crushing with its strident, razor-edged guitars and Doom Metal-inspired beats in an absolutely atmospheric, captivating and aggressive manner, also presenting lyrics that exhale melancholy (“A once-proud people, now brought to their knees / Their downfall created by their own hand, it seems / The end was coming quicker than foretold / The tears of young and old were heard throughout the land”). In An Undying Verse, the talented Ben keeps blasting his obscure and melodic Black Metal for our total delight, generating an enfolding ambience full of somber passages, demonic roars and crisp riffs, and let me tell you that Ben does a fantastic job matching the sharp sounds of his guitar with his anguished gnarls, with all background keys and ethereal elements bringing an extra touch of delicacy to the overall result, building an instant connection with the title-track The Path Untravelled, a grandiose display of classic Atmospheric Black Metal that instantly darkens our hearts and fills our souls with melancholy and grief. Moreover, the song also brings forward minimalist piano notes amidst potent doomed beats and hellish vociferations, resulting in a voyage through dark and desolate lands that goes on for over ten minutes of awesomeness. 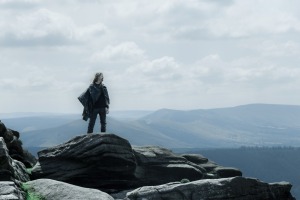 Elmet is another stunning creation by Ben, showcasing a very melodious and pleasant rhythm where his riffs sound more acute and austere than ever, not to mention his blast beats and whimsical keys, inspiring us all to close our eyes and let his music embrace us completely. Brethren And Betrayer, the second to last aria in The Path Untravelled, presents the most gentle intro of all songs, evolving into a heavy but utterly harmonious display of extreme music where Ben once again delivers a lesson in Atmospheric Black Metal with his deep gnarls and endless obscurity, whereas the final song The Wraith already beings in full force, setting the tone for Ben to darkly declaim its pensive lyrics (“Beyond our knowledge there is a lost place / And none who reach there will ever return / Here he stands / Stalwart protector of all his lands / Until the end / At his hand, enemies were vanquished / Until he could fight no more / The spirit endures… the body is weak”). All instruments are in perfect sync throughout this superb composition, where not even a single space is left empty in its over ten minutes of metallic, ambient and Stygian sounds and tones, majestically flowing until an epic and somber finale.

Once again we’re having the pleasure of facing a multi-talented, hardworking musician that “multiplies” himself in order to generate full-bodied and dense musical beasts to metalheads like us, and if I were you I would definitely show my appreciation and support to Ben and his Arx Atrata by purchasing The Path Untravelled from his own BandCamp page and by listening to it in full on Spotify, as well as by following him on Facebook. If Ben’s main goal with his Arx Atrata is to take us all to unexplored, bitterly cold lands where we can isolate ourselves from the rest of the world and finally find our inner light or darkness, let’s say he more than succeeded with The Path Untravelled, leaving us stunned and, consequently, eager for the next step in his vibrant musical journey through the vast world of extreme music.

Best moments of the album: An Undying Verse and The Wraith.