Focusing on struggling with the pain of loss, the new album by this Maryland-based metal band reflects all the dynamism and difficulties faced during all stages of grief. 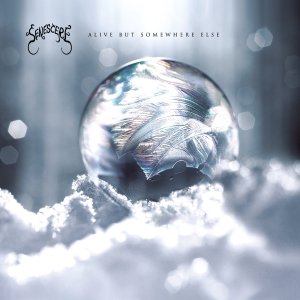 Originally formed as an instrumental and acoustic solo project by vocalist and guitarist Alden Bradstock (Seventh Seal) in 2014, Westminster, Maryland-based Melodic Death Metal act Senescere grew into a full band with the addition of three new members in 2016, Nathan Heavel on bass, Andy Stark on drums and Josh Clark on additional vocals (all from bands such as Seventh Seal and Vestascension), allowing Alden to expand the band’s musical reach to a more aggressive and abrasive sound in their brand new opus Alive But Somewhere Else. Produced by Alden and Josh themselves, engineered and mixed by Josh at Dark Hollow Studio, mastered by Scott Atkins at Grindstone Studio, and featuring a stylish cover photograph by Mandy Martz Chappell, the album focuses on struggling with grief, turning to unhealthy sources of comfort and creating a false sense of happiness to deal with a loss. As stated by Alden himself, “loss and aging have been the central theme of this project since the beginning. I think I’ll always find some inspiration there, and new ways of looking at the pain and struggles it can bring. There are all kinds of faces and stages of grief. It’s dynamic, it isn’t always dark and miserable. It’s deceptive and difficult to categorize. I wanted the music to reflect this somehow, and I think that’s why I enjoy mixing multiple styles and varying intensity in the songwriting. It’s allowed to be extra melodic and catchy at times, just as it’s allowed to dive into blasting drums and tremolo picking if the song calls for it.”

And the smooth guitar lines by Alden ignite the atmospheric intro Freezing Of The Hillside, setting the stage for the band to stun us all in Lost In The Cold, where Alden’s deep guttural roars walk hand in hand with the classic beats by Andy, blending elements from Groove and Progressive Metal with their trademark Melodic Death Metal. Then speeding things up and enhancing their rage the quartet blasts the thrilling The Low Clouds, bringing forward dark and pensive lyrics (“Here I, as a loner / Do feel the texture of the edge / Tracing paths for days on end / A crisp and jagged line / So easy to step over / So welcoming to fall from”) and the usual strength and fury from Scandinavian metal, followed by Alive, clearly inspired by the modern and melodic metal music played by bands like Insomnium and Amorphis, with Alden growling with tons of anguish while Nathan and Andy give a lesson in groove and intricacy with their respective instruments, not to mention Josh’s spot on backing vocals. 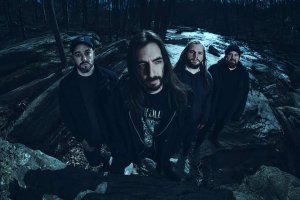 After such powerful display of metal music, simply sit down, relax and let the enfolding lines from the instrumental piece Melted penetrate deep inside your mind before a wall of sounds smashes your senses in the fantastic Resonate, where Alden’s crisp riffs are beautifully complemented by the low-tuned bass by Nathan, exhaling progressiveness and feeling and all spiced by Alden’s piercing guitar solo; whereas Alden and Josh make a fantastic vocal duet in Aging Affinity, blending the visceral and violent sounds of classic Death Metal with the harmony and complexity of more modern styles, ending in a cryptic and atmospheric way. Heartspace is perfect for slamming into the circle pit while at the same time enjoying the sharp and intricate beats by Andy and the thunderous bass lines by Nathan, resulting in another ode to contemporary Scandinavian Melodic Death Metal that ends up warming up our senses for almost ten minutes of Senescere’s wicked music in Moon And Sun, where the band’s razor-edged riffs, pounding drums and obscure vocals invite the listener to an exciting metal voyage in what’s by far the most progressive and detailed of all songs, even bringing hints of Black Metal and putting an introspective and climatic ending to the album.

Highly recommended for fans of the melodic and pensive heavy music played by renowned acts the likes of Dark Tranquillity, Amorphis, Opeth, Katatonia and Insomnium, among several others, Alive But Somewhere Else can be appreciated in its entirety on YouTube and on Spotify, but of course in order to show your true support to Alden and his henchmen you should definitely purchase a copy of the album from their own BandCamp page, as well as from Apple Music and Amazon. Also, don’t forget to follow them on Facebook, Instagram and YouTube for news, tour dates and more of their classy music, helping you cope with loss and pain to the sound of our beloved Heavy Metal and, therefore, keeping Alden and his Senescere beyond inspired to create more of their multi-layered and meaningful music for many years to come.

Best moments of the album: Lost In The Cold, The Low Clouds and Resonate.